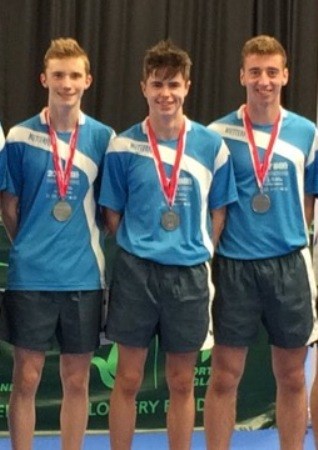 The UK School Games were held at Loughborough University from 31 August - 3 September this year.

Approximately 1600 athletes competed across 12 sports, giving all the young athletes a multi-event experience not found at another school event in the UK. The Games are seen as a springboard for future athletes, and it is interesting to note that 56 of the 382 athletes representing team GB at the 2016 Olympics in Rio competed at previous UK School Games.

Scotland had both a Boys and Girls team competing in the Table Tennis U18 category this year, with ASV TT Academy players Dylan Curry & Tessa Yau making up a third of their respective teams.

Due to the strength and depth of the players across England, there are several 'regional' teams that represent England, such as North West, South East, and such like. This makes for a stronger and wider completion, but only one team represents Scotland, Wales, etc.

Both Scottish teams had good events. The Girls team were extremely competitive with some great individual wins from Tessa, however a few closely fought but ultimately 2-3 defeats for the team saw them finish outside the medals.

The Scottish Boys team really were the team to watch, and finished the event taking the Silver medal! (see attached picture with Dylan (centre), Calum Morrison (Edinburgh) on the left and Keir Morton (Dumfries) on the right.

This was particularly unfortunate as the team finished in joint first place, but ended up with the Silver medal on count back to the North East of England. Both Scotland and the North East team only lost one match each across the event, however on sets and games won and lost they edged out the Scottish boys.

Individually Dylan had an excellent tournament, taking excellent wins against top English junior players Joe Clark & James Smith. it is worth noting that both Dylan & Tessa are still only 15 years old and are competing Nationally at U18 level.

The new 2017/2018 Table Tennis season kicks off with the North of Scotland Open, taking place at Aberdeen Sports Village on Sunday 17 September. Our Academy players will be looking to start the season in style at this event. Watch this space!