The Perth Grand Prix followed on from an international friendly match against Wales the previous evening, with ASV Academy players Dylan Curry (Banchory Academy) & Josef Bokedal (Aberdeen Grammar) being selected to represent Scotland in the U18 & U15 boys respectively. Both boys gave an excellent showing and remained undefeated, helping Scotland to an 8-1 win overall.

In the Grand Prix event on the Sunday, ASV Academy players got off to an excellent start when Hania Petryk (Bridge of Don Academy), seeded at No.2, made it to the U13 girls final match. Hania then came up against the No.1 seed Amelia Smolarek from Glasgow. The girls know each other well and are usually the main rivals for the U13 girls titles, with Amelia having the upper hand of late. However it was Hania who came to the fore on this occasion, opening up with her excellent forehand topspin and giving Amelia very little chance to respond. An excellent 3-1 win saw Hania take the U13 Girls Title. 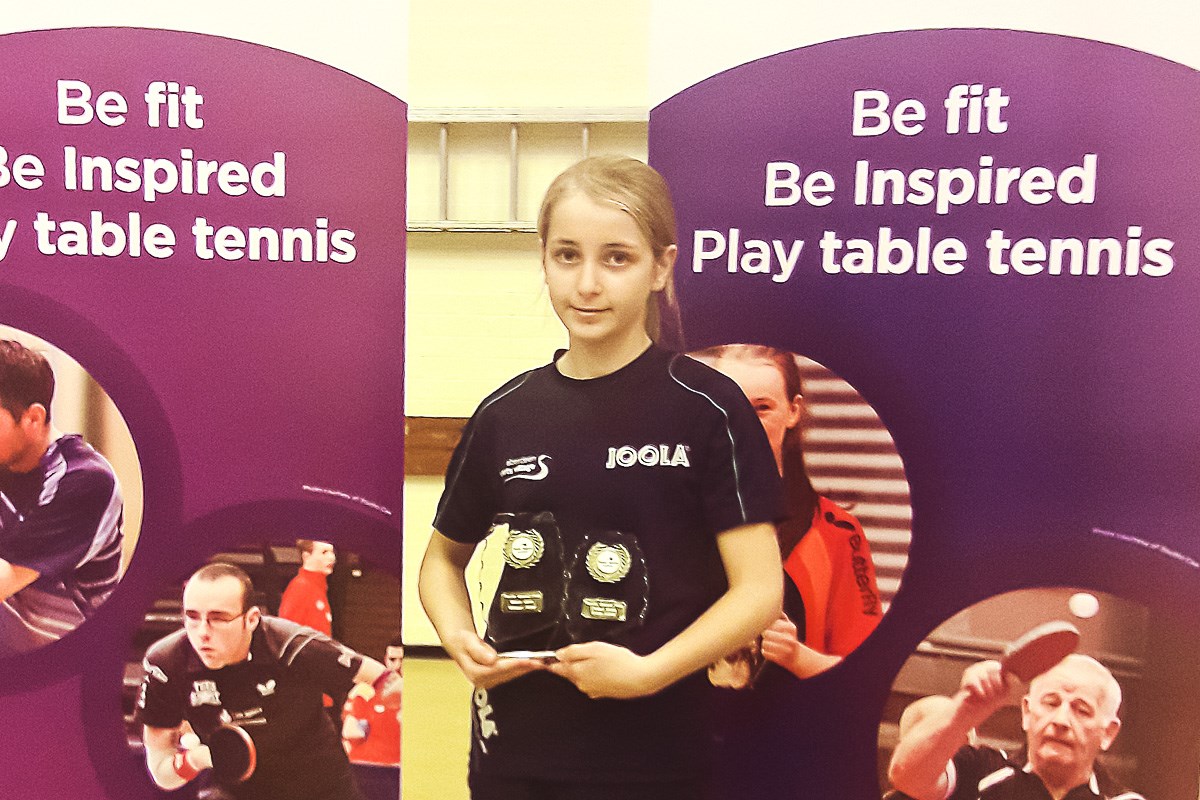 Hania Petryk, U13 Winner and U15 Runner Up

However, Hania wasn't finished there, racing through to the semi-finals in the U15 girls event. Once again she was up against Amelia, and for the second time in the day an excellent attacking display from Hania saw another victory over Amelia, taking Hania through to the final match. Unfortunately the final was a step too far, coming up against U15 No.1 seed Holly McNamara from Ayrshire. However Hania added an excellent U15 Silver Medal, to her U13 title from earlier for an excellent day's work.

Daniel Tibbets (Arduthie Primary) matched Hania and made it through to the final in the U13 boys. Daniel had dispatched clubmate Ben Xiong (Airyhall Primary) in the semi-final, with a third ASV Academy player Jonathan Pan (Robert Gordons) up against  No.2 seed Hayden Jackson from Edinburgh in the second semi-final. Daniel, seeded at No.1, was up against Hayden in the final. After a slow start Daniel's defensive play combined with his ability to attack quickly was too much for Hayden, and Daniel took the U13 Boys Title. 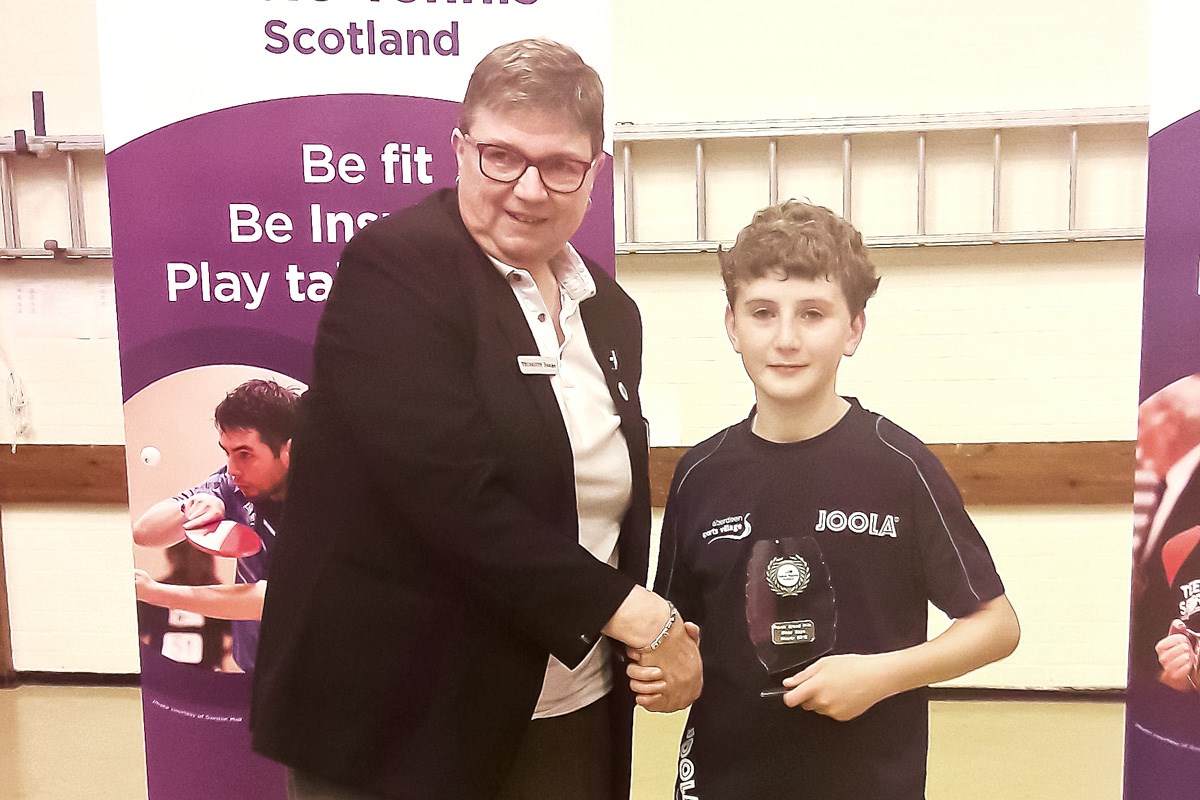 In the U15 boys event, the ASV TT Academy had 5 players make it through to the quarter-final stage, an incredible achievement. This did mean that clubmates were drawn against each other, with the winner of the Louis Loi (Turriff Academy) v Harry Blackhall (Kemnay Academy) match, taking on the winner of the YeYe Mo (St.Machar Academy) v Jonathan Pan (Robert Gordons) match in the semi-final. After the dust had settled between the four clubmates it was Louis who lived up to his No.1 seeding and made it through to the final, up against No.2 seed from Glasgow Rayyan Khalid. Rayyan had earlier overcome Daniel Tibbets (Arduthie Primary) in the second semi-final, which was an excellent showing for 10-year-old Daniel.

After taking an early lead in the final, Louis found himself at 1-2 down. However Louis showed some tremendous grit and determination as well as some good tactical play to take an excellent victory with a remarkable 14-12 final game, and win the overall match 3-2 meaning Louis taking the U15 boys Title. 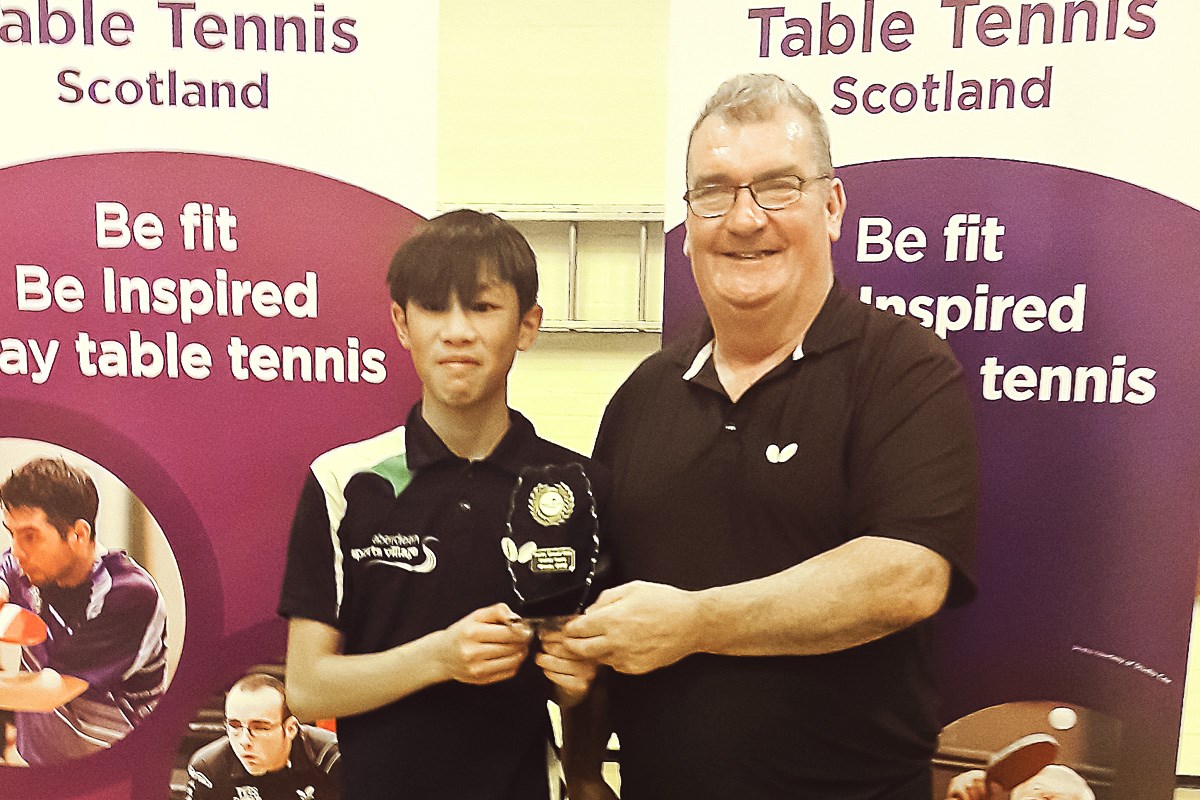 The U18 boys event saw Rafal Wilowski (Banchory Academy) go in as No.2 seed with Elias Bokedal (Aberdeen Grammar) as No.4 seed. Rafal remained untroubled in his path through to the final. Elias however came up against fast improving younger brother Josef Bokedal (Aberdeen Grammar) in the quarter final.  14-year-old Josef was unseeded for this U18 event, but had an excellent performance to defeat older brother Elias and set up a semi-final against No.1 seed and current Welsh No.1 Yameen Al-Dahiri. Perhaps a little overawed initially Josef found himself 0-2 down, and although relaxed in the third game and played much better table-tennis, still went down 9-11 to Yameen, losing out 0-3. This meant Rafal was up against Yameen in the final match. This was a much tighter and difficult match than either of the semi-finals for the players, but in the end Rafal had to settle for the U18 boys Silver Medal.

Overall it was an excellent day for the ASV TT Academy players, taking 3 titles and 2 silver medals.

November sees both the Glasgow Open & the Scottish Primary Schools championships take place, and we are hoping for success at both these events.