The event came on the back of a full Senior Team selection for Dylan Curry (Banchory Academy) who will be travelling to Switzerland to represent the Scottish Men's team in the European Cup. A fantastic achievement for 16 year old Dylan who will be playing alongside 10 time Scottish Champion and veteran professional player Gavin Rumgay.

Back in Glasgow the ASV Academy players got off to an excellent start, and performance of the day had to be from Josef Bokedal (Aberdeen Grammar). Still only 14 years old, Josef, seeded at No.1, eased comfortably through the groups and the knockout stages to the final of the U15 boys event. Up against the No.2 seed Rayyan Kalhid from Glasgow. Josef was heavy favourite, but frustrating play from Rayyan saw him take a 0-2 lead over Josef. Showing great determination & desire Josef fought back taking the next two games after deuce points in both, then sealed the deciding game 11-9, taking the U15 boys Title.

Josef then went into the U18 boys event, which had a quality field including ASV Academy players Andrew McRae (Westhill Academy), Rafal Wilowski (Banchory Academy), and Josef's older brother Elias Bokedal (Aberdeen Grammar). Top seeds in the U18 boys event was Zaid Kahlid & Charlie Morton, both from Glasgow. After the group and first round of KO stages, the quarter finals saw all 4 ASV Academy players through, and all in different ties, meaning an all Aberdeen semi-final line up was possible! Andrew was very unfortunate to go down 2-3 to Charlie the No.2 seed, and Andrew will feel disappointed that he did not see out that particular match. In the second quarter final, Rafal proceeded to dispatch top seed Zaid 3-2, after being 0-2 down! This was an excellent win for Rafal and set him up to play Charlie in the semi-final. Now full of confidence, Rafal combined his consistent attacking play with some heavy winning shots and took a 3-1 win to make it to the U18 final.

The other half of the draw saw both Josef & Elias take reasonably comfortable quarter final wins, and set up an all Aberdeen semi-final between the brothers. Josef has had the upper hand lately, but found himself 0-1 and then 1-2 down to Elias. In an incredibly tight match, it was Josef who came out on top 12-10 in the deciding game over older brother Elias, and set up an U18 final with Rafal. After taking out the top two seeds it was Rafal who looked favourite for the match, but Josef had other ideas and continued his excellent form for the day, taking the U18 Boys Glasgow Open Title and Gold Medal, with Rafal having to settle for the U18 boys Silver Medal. 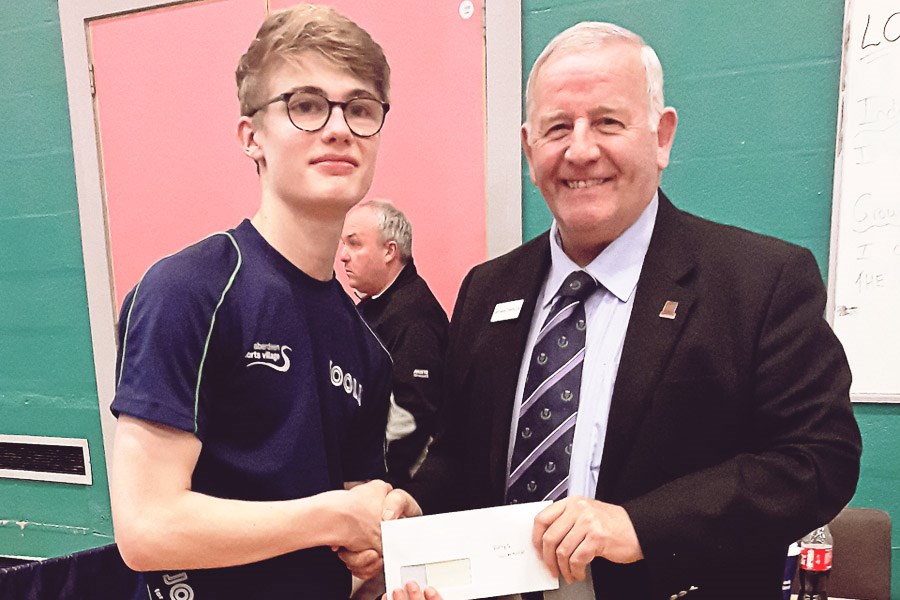 Hania Petryk (Bridge of Don Academy), seeded at No.2, made it through to the U13 girls final group stage. Hania had to play a 3-way round-robin against the No.1 seed Amelia Smolarek from Glasgow, and No.1 Edinburgh U13 girl Hannah McDonell. The girls ended the round-robin with 1-win each, with Hania once again defeating Amelia. However on countback, Hania was unlucky and ended up with the U13 Bronze Medal.

However, Hania wasn't finished there, racing through to the semi-finals in the U15 girls event. Once again she was up against Amelia, and for the second time in the day took another win and made it through to the final. For the second open event in succession Hania came up against No.1 seed Holly McNamara from Ayrshire in the U15 girls final. In the end Hania added an excellent U15 Silver Medal, to her U13 Bronze from earlier for an excellent day's work.

Tessa Yau (Albyn School) carried on the excellent work for the girls, going through the group and knockout stages of the U18 girls event without losing a match. Tessa has seen a dip in her form over the start of this season, and Glasgow was her first final of the year. In the final Tessa faced Glasgow No.1 Paula Callaghan, but with Tessa's excellent form returning it was no contest, and a dominant 3-0 win saw Tessa take the Gold medal and become Glasgow U18 Girls Open Champion. 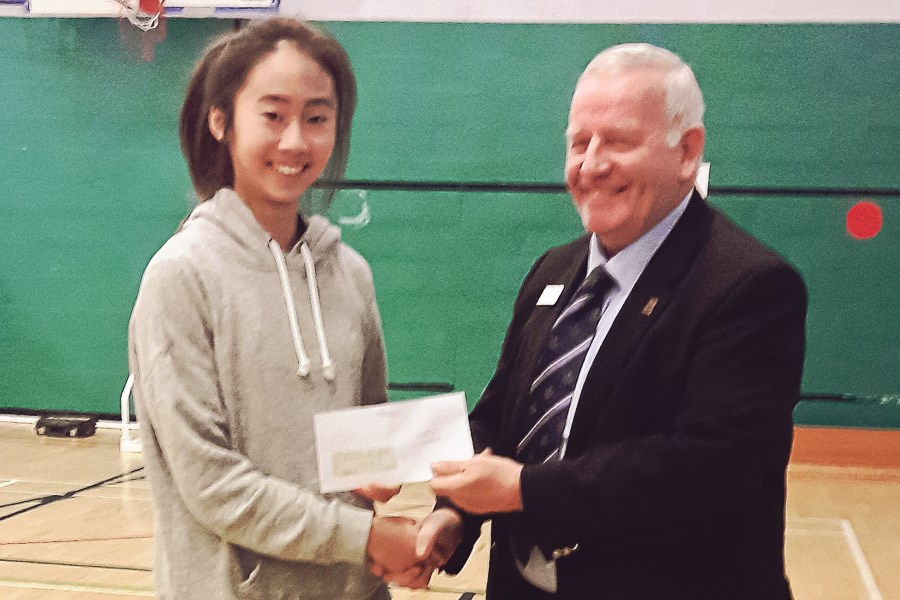 Harry Blackhall (Kemnay Academy) matched his fellow ASV Academy players and made it through to the final in the U13 boys. Harry had dispatched clubmate Daniel Tibbetts (Arduthie Primary) in the semi-final, and Harry was then up against No.1 seed Charlie McGowan from Edinburgh in the final. This was a tough match for Harry, and he took the Silver Medal in the end.

Andrew McRae made up for his quarter final exit in the U18 boys event to take the U18 Junior Open Doubles Title, along with partner James Forrest from Edinburgh.

The Scottish Primary School Championships then took place the following weekend, on Saturday 24 November, with 10 players from the ASV TT Academy taking part, many for the first time with some players as young as 7 years old getting their first taste of competition!

Ilaria & Grace didn't disappoint, both making it through to the semi-final stage and coming up against Amelia Smolarek from Glasgow and Hannah McDonell from Edinburgh. This was always going to be a tall order for both Ilaria & Grace, and both had to settle for a Bronze match playoff between them. The Bronze medal match was an excellent display from both girls, both playing attacking table-tennis and playing the game that the spectators like to see. In the end it was Ilaria who took the Bronze Medal, with Grace in 4th place. This event sees qualification for the UK Primary Schools event, and both Ilaria & Grace earned selection for the Scottish team with their top 4 finishes - well done to both.

The boys event gave a few surprises, with new & unknown Edinburgh based player Luca Li looking very strong indeed. Edinburgh also had the No.2 seed in Haydn Jackson, with Daniel & Jonathan in at No.1 and No.3 seeds respectively.

Ben had a mighty tussle with Haydn Jackson, and only went down 9-11 in the 5th and deciding game, a real shock for Haydn who hadn't expected such a hard match, and an excellent performance from Ben.

Jonathan came up against unseeded but very strong new player Luca, and it was Luca who progressed with a close, but ultimately comfortable 0-3 win. 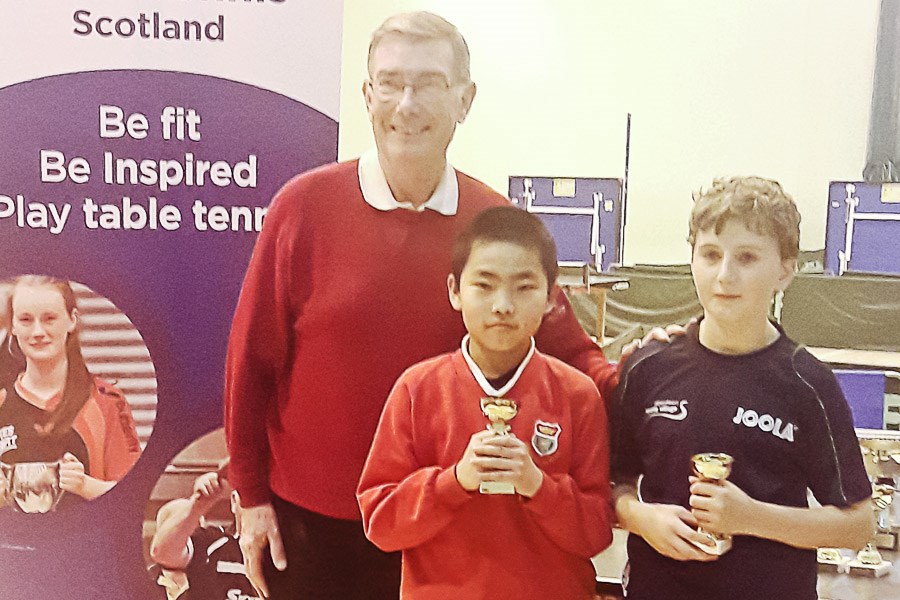 The other 2 Aberdeen players, Nathan & Daniel, had reasonably comfortable wins and it was those two who progressed through to the semi finals. Daniel then made it through to the final, taking care of Haydn with relative ease, and there he faced Luca who had a more difficult task against Nathan, taking a hard pressed 1-3 win.

In the final Luca raced to a 0-2 lead against Daniel, but Daniel showed the tenacity we expect from him, somehow clawing his way back into the match by taking the next 2 games, and setting up a 5th and deciding end.

Daniel now looked favourite and was leading 6-3 in points at one stage in the last game. Luca however managed to find a way back and Daniel had to settle for the Silver Medal on this occasion.

Like the girls this does mean that both Daniel & Nathan earn selection for the Scottish Primary Schools team at the UK Home Internationals next April.

The Doubles events finish off the day, with both Ilaria & Grace, and Daniel & Ben teaming up and taking further Silver medals respectively. 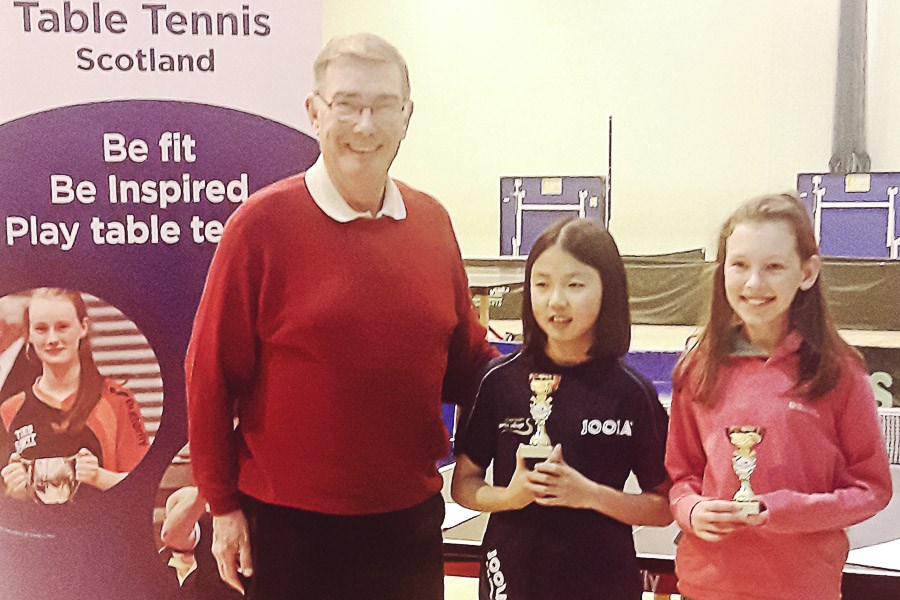 Another excellent month for the ASV TT Academy players, and with no events in December the next target will be the Edinburgh Open in January.