The winners of the 2014 Braintree Summer League have been decided.

The Tuesday league was won by Felsted Law Boys, comprised of Dean Wood, Andy Laws and Trelawney Joice, who finished a huge 8 points clear of the runners-up.

The Thursday league was won by Triple Trouble, comprised of Clare Johnson and Victor Chan. They finished 3 points ahead of the runners-up.

This is the second year in a row they have won their league so a big Well Done!!

Needless to say several of the winning teams can expect some handicap revisions for the Winter League!! 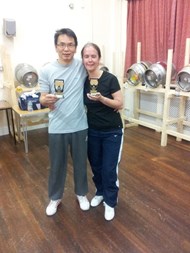