The first day saw four matches starting with a 7-3 win over Sussex 2nds. Joe, Anthony and Emily won a game each while Dave and Michele both won two, the latter beating another highly ranked Vett, Rose Rainton, in four close games. An 8-2 win over Surrey followed which flattered slightly as four games went to a fifth end, Avon winning them all. Middlesex 2nds were next up and were also beaten 8-2 in another strong team performance in which Martin, Miche and Dave all won two backed up with a win each for Joe and Emily. The final game of the first day was against Hampshire and another good team effort ensured a 7-3 victory. Michele and Emily won all four women's games while Martin, Joe and Anthony claimed a win each.

All this meant the team were top of the table and unbeaten, as were Dorset, who were the first opponents on Sunday. They proved to be the standout team of the division with Matt Ware, Hugo Pang and Gina Rieck all winning two in a 7-3 defeat. Devon 2nds also proved just too strong in a very tight match. Martin lost deuce in the fifth in game 8 to Mike Griffiths, and Michele lost 9 in the fifth in game 9 to Naomi Jackson, with the final score being 6-4. Cornwall were up next in the last game of the weekend. Darren Reed and Rachel Treverrow won their four games but the team pulled together and all five players won a game each in a hard fought draw.

After many close matches and much sweat and effort the team came runners-up which is an excellent achievement considering the strength of the opposition. All six players contributed greatly to the team's achievements and it was notable how our county was one of the more united squad's on show. 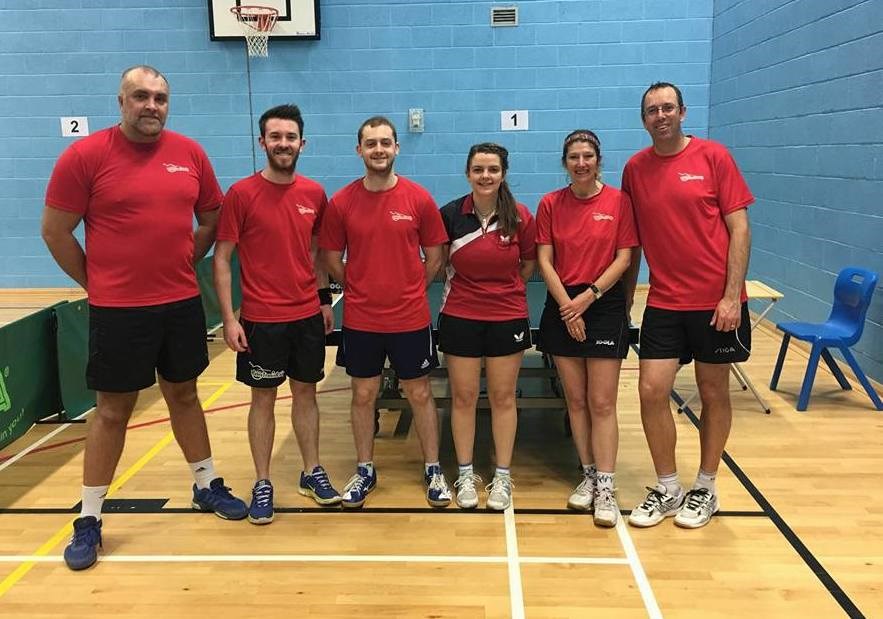