One of the most anticipated events in the local TT calendar, the 52nd Individual Championships of the Burnham & District Table Tennis League will be held at William de Ferrers Sports Hall next weekend, 17/18 March, with Finals Night on Thurs 22 March at Champions Manor Hall. Eight tables will feature action from eighty players competing in a variety of seventeen different events, from Juniors to Veterans and everything in between. Spectators are encouraged – entry is free – and if the table tennis does not entice you enough then maybe the weekend selection of refreshments will! 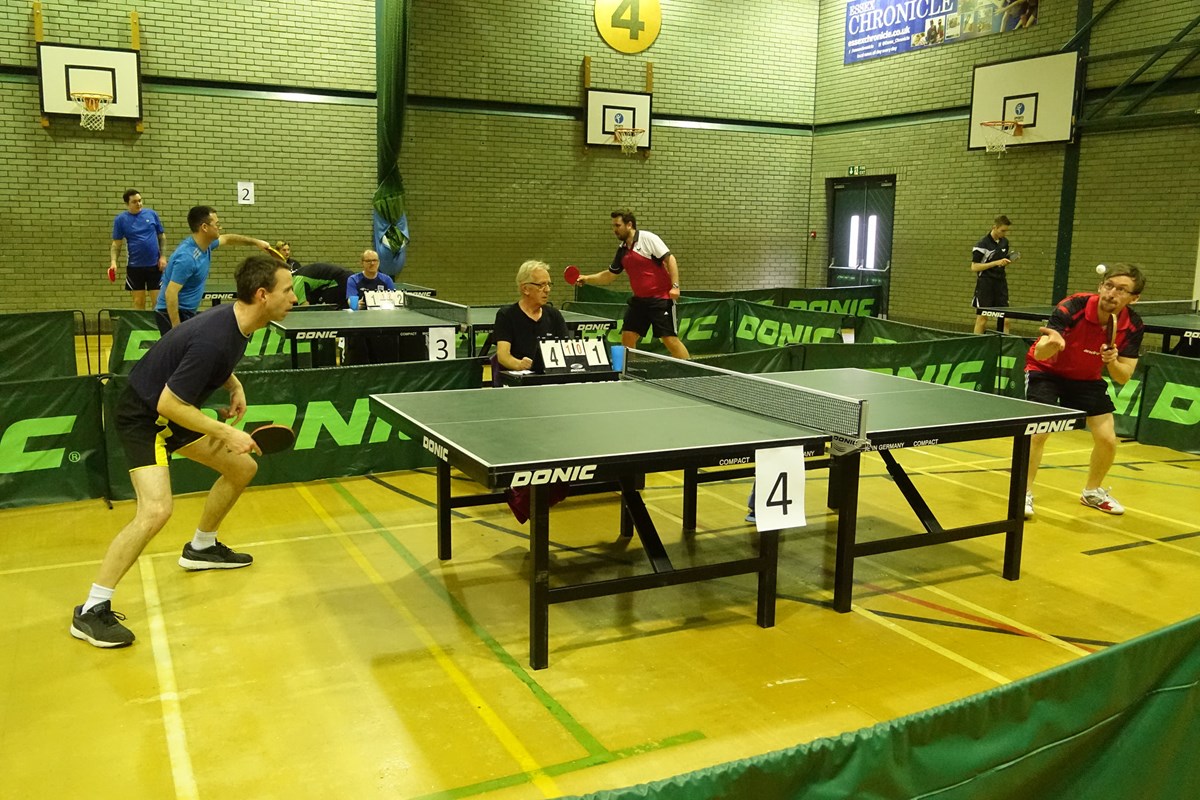 In the Blue Riband event, the Men’s Singles, no.1 seed and holder Reece Seddon (23 y/o) will be out to defend his title which he won for the first time in 2017. Seddon will face a plethora of competition in the other seeds, all older than him – perhaps a little slower? – two-times champion and newly crowned Chelmsford champion Duncan Taylor is the second seed, while Fambridge’s Keith Adams and Gary Young are third and fourth, and then follows Kevin Read, Minda Sinkus, George Reeves and Charles Sweeny. There is little to choose between these guys in terms of standard - a very open event. The Men’s Singles will begin with Preliminary Groups before progressing to Main Groups and Knockout, and the players not to make it through either Group stage will automatically be entered into the Plate (Consolation) event, which will be straight Knockout and is a new event introduced last year and won by David Gatheral. There is a lot of strength in depth this year as you will see when the Groups are displayed on the day, and I will not be at all surprised if upsets run thick and fast! 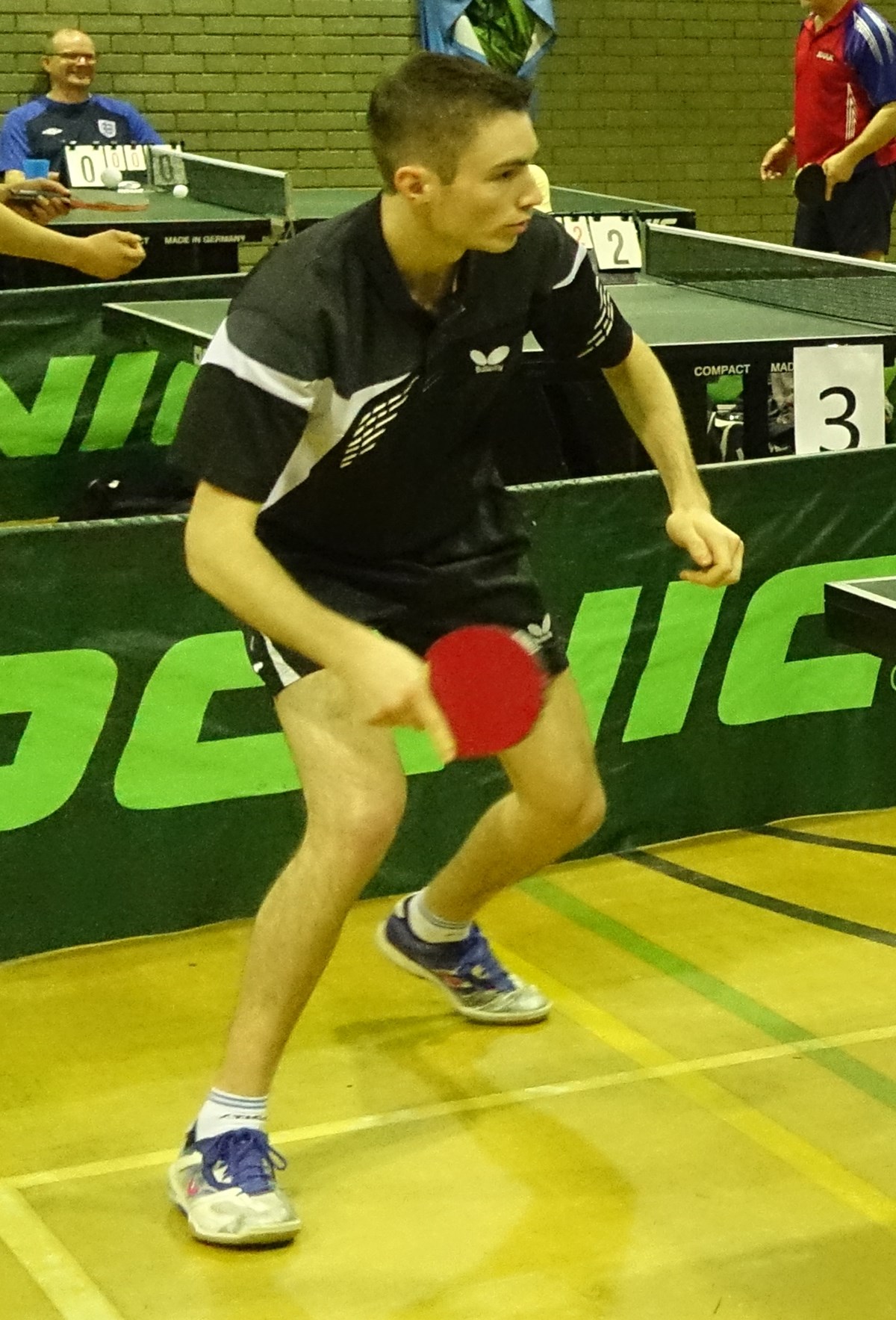 The Ladies’ Singles will see no.1 seed, holder and three-times winner Dawn Baldry out to defend her title. Disappointingly, Baldry’s traditional challengers Lin Roff and Jan Fuller are not in the mix this year, and there are only three other entrants. This event will be played as a round-robin Group to decide the Final which will be held on Finals Night, and the Group losers will be entered into the Plate. Baldry will have to get past Susan Body, Shirley Carroll and Kath Little if she is to continue displaying the trophy on her mantel. Both the Men’s Singles and Ladies’ Singles events will be played on Sunday. 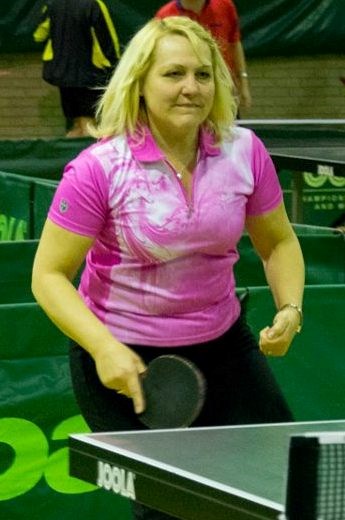 I will now work through all of the Saturday events, which are all played to completion on the day, with the possible exception of the Junior Singles which may have its Final on Finals Night. Saturday is dominated by the divisional, junior and handicap events.

The Mixed Open, played as straight Knockout and open to all players except the eight Men’s Singles seeds, is always an exciting event and unique in the fact that it is not seeded and thus the draw is totally random; this can pit some strong players against each other in the early stages. Holder Glenn Johnson will be out to defend his title, and I will expect other front runners to be Sam Lowman, Eric Green, Steve Whiteley, Babul McLeod, Lee McHugh and Peter Mynard. Tipping for this one is difficult as so much depends on the draw, but don’t be surprised if dark horse and Restricted no.1 seed Daniel Young makes an impression! 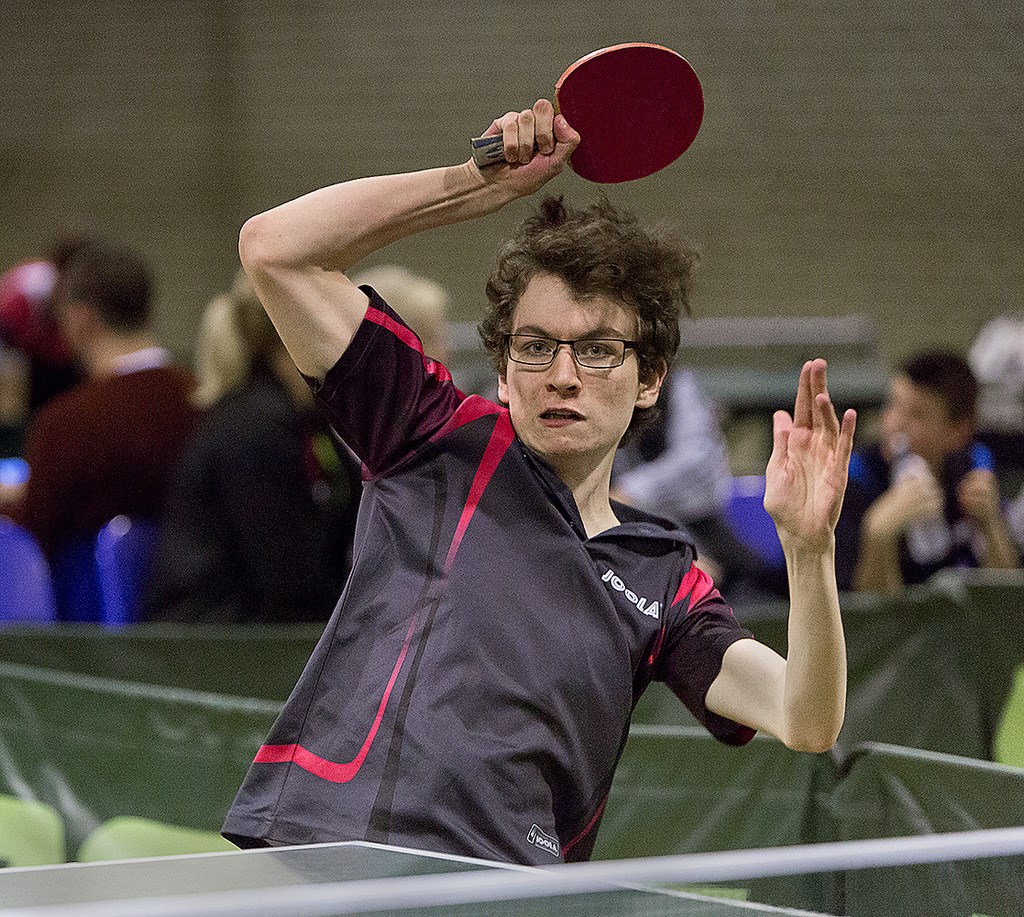 The Restricted Singles, open to Division 2 & 3 players, will begin with Groups before progressing to Knockout. The holder David Gatheral is not eligible this year, and only one of the seeds has won this event before, so odds are on that we will see a fresh winner! The No.1 seed is young talent Daniel Young, while last year’s runner-up Victor Chan is second seed, and then follows Neil Freeman, Ken Sheard, George Ashley, Nick Duce and Roger Hance. I am going to tip Chan here! 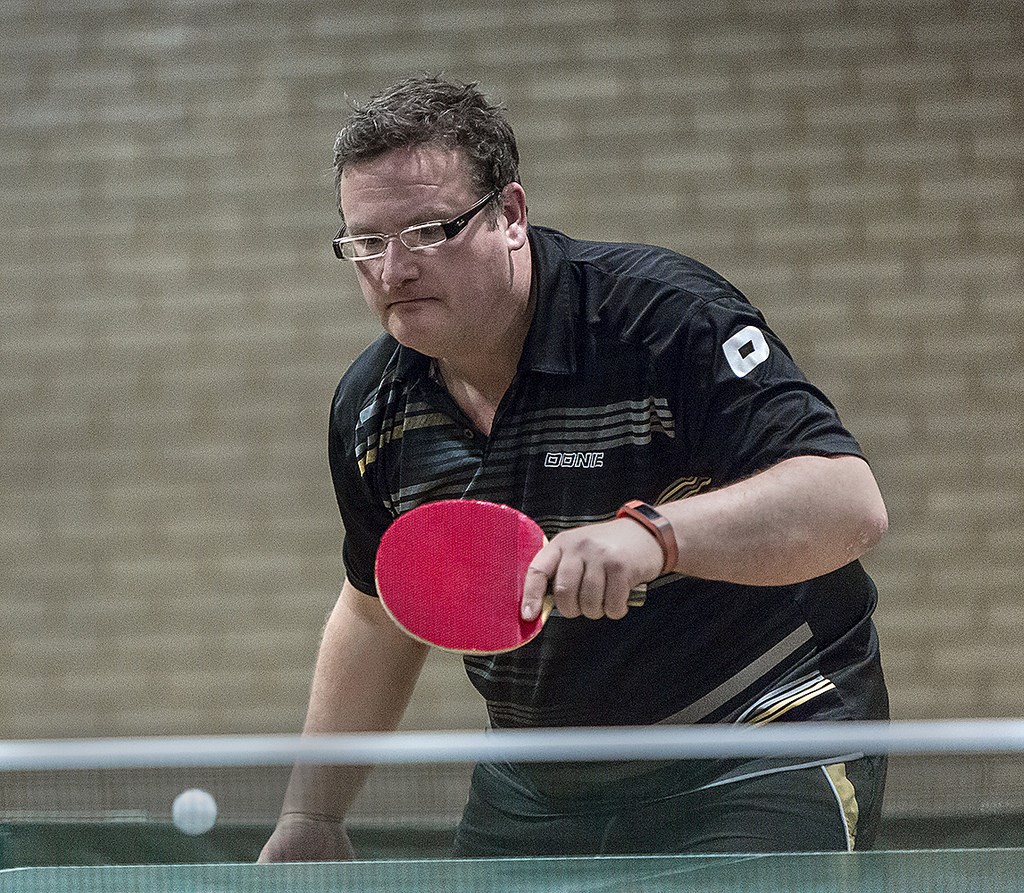 Will David Gatheral take home as many trophies as last year?

The Fambridge Trophy, open to Division 3 players only, is played as straight Knockout. This time none of the seeds have won this event previously, so similar to the Restricted we are likely to see a fresh winner.  The No.1 seed is Louis Gunn, and then follows Tim Huxtable, Brian Ellis and John Knights. My tip here is Louis Gunn who I think is the clear favourite, but you cannot discount the Dark Horse Mitch Davies. So will Gunn deliver the goods?

The Junior events are disappointingly down on entries this year, but will still provide quality table tennis from the league’s young talents. In the Cadet Singles the seed and clear favourite is Daniel Young, while all his challengers will fight it out in the Groups to determine who progresses. In the Junior Singles the no.1 seed is the holder Kieran Stanley, but again second seed Daniel Young will be the favourite here unless Kieran or third seed Luca Bailey can spring a surprise. In the Junior Doubles the no.1 seeds are the holders Noah Sage/Sam Mortimer-Ford, and their stiffest challenge comes in the form of second seeds Luca Bailey/Kieran Stanley. Other names to watch out for are Alex Porter, Ben Porter, Alex Wilson, Oliver Wylie, Blaydon Farmer, Toby Hawkes, Edward Vale, Elliot Gordon and Hugh Millard. 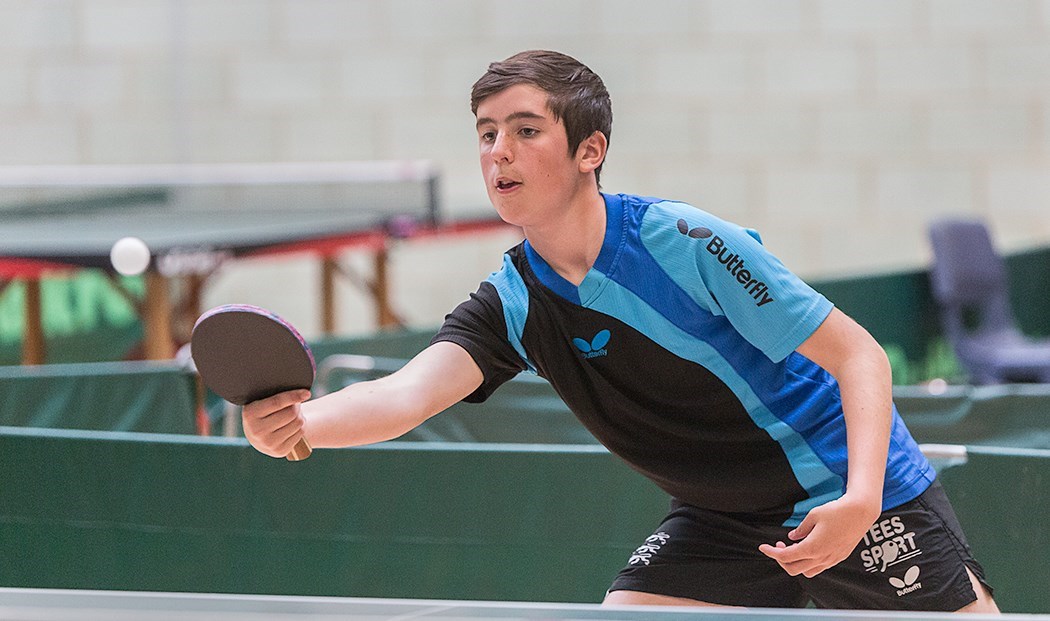 Daniel Young is set to have a busy weekend

The Handicap events will round off Saturday's action. There will be a Singles and Doubles, both played as straight Knockout, where the players' starting points are predetermined by their handicaps and range from +15 all the way to -20! These matches are played in the old format of ‘Best of 3 games, up to 21 points, 5 serves’ and aim to level the playing field to give every player an equal chance regardless of ability. The Doubles with partners drawn out of a hat always throws together some interesting pairs! Mervyn Perriman will be out to defend his Singles title, and will Peter Mynard add a fourth Doubles title to his illustrious record?

Back to the Sunday events, a day dominated by Senior and Vets competitions.

The Men’s Doubles will be played as straight Knockout. Holders and three-time winners Kevin Read/Duncan Taylor are the No.1 seeds, while Fambridge pair Keith Adams/Gary Young are seeded second, and then follows George Reeves/Charles Sweeny and Lee McHugh/Peter Mynard. My tip here is not an ambitious one; it is the tried and tested partnership of Read/Taylor, however strong competition abounds beyond the seedings in the likes of Minda Sinkus/Sam Lowman and Reece Seddon/Steve Muth. The Final will be played on Finals Night. 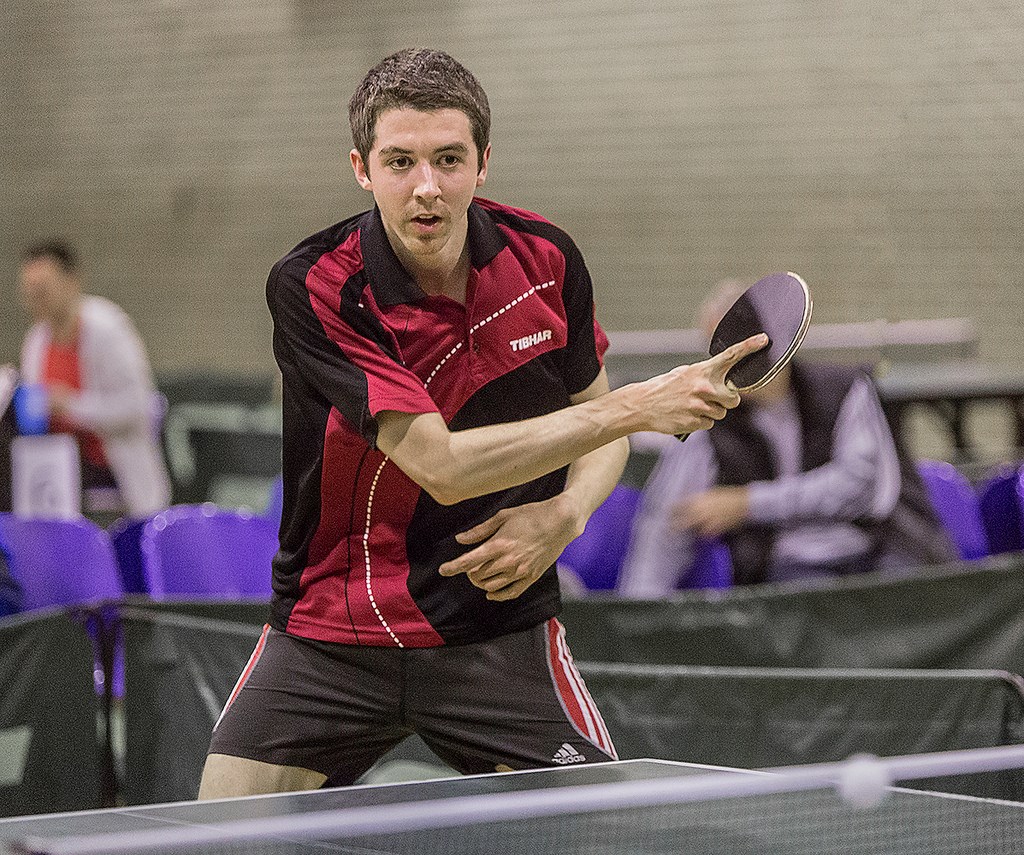 Will Lee McHugh fix his grip before the weekend?

The Ladies’ Doubles features the same four entrants as the Singles, and the title will be decided between Dawn Baldry/Shirley Carroll and Susan Body/Kath Little. This event will be played to completion on the day.

The Mixed Doubles features four pairs. Holders and No.1 seeds Dawn Baldry/Ciaran Whelan will have a fight on their hands to get past Shirley Carroll/Steve Whiteley, Susan Body/Reece Seddon and Kath Little/Louis Gunn. The Final will be played on Finals Night.

The Veteran’s Singles (Over 40s) is almost as strong as the Men’s, as is often the case. The No.1 seed and holder Kevin Read will be keen to defend his title, and out to challenge him are his doubles partner Duncan Taylor seeded second and Keith Adams third, and then follows Gary Young, George Reeves, Glenn Johnson, Gurjit Bhambra and Babul McLeod. The Final will be played on Finals Night.

The Veteran’s Doubles, which like the Singles usually is one of the last events to finish on Sunday evening, is a test of endurance!  No.1 seeds and holders are the same as the Men’s Doubles, Kevin Read/Duncan Taylor, the second seeds are also the same in Keith Adams/Gary Young, and then follows George Reeves/Steve Muth and Glenn Johnson/Chris Jacob. This event will be played to completion on the day, or the Final may be played on Finals Night. 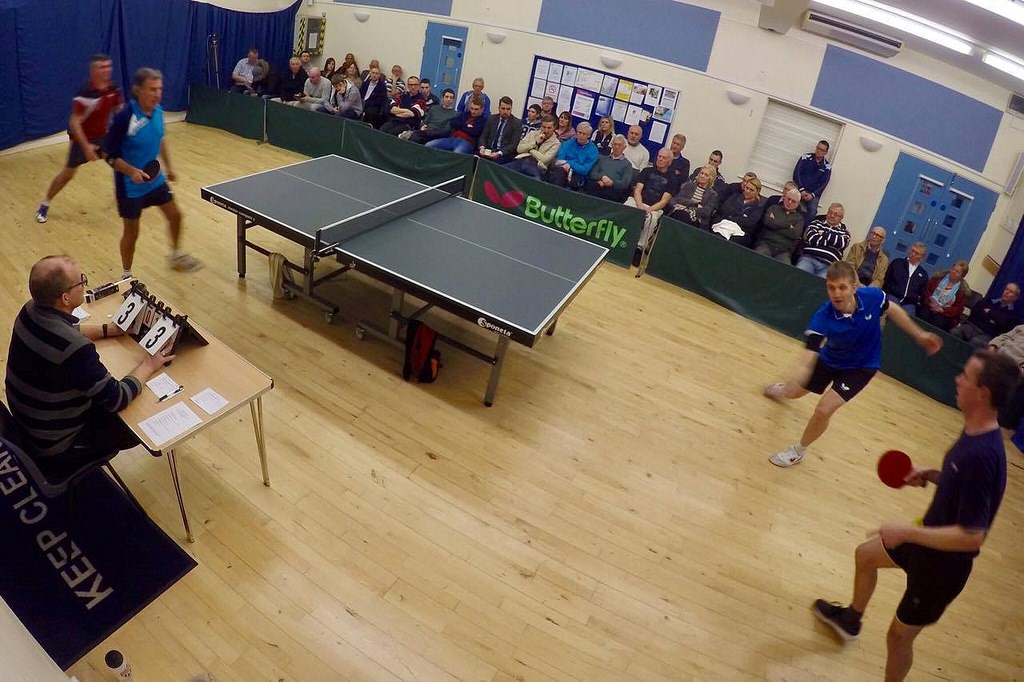 The Over 60s Super Veteran’s Singles (or is it Super-Duper?) is a relatively new event, sort of superseding the Over 50s in 2014. Holder and winner of the last two years, John Poysden, will not be present, so this accolade is up for grabs. Will it be top seed Glenn Johnson, second seed Steve Whiteley, third seed Eric Green, or will fourth seed Chris Jacob add to his 2015 title? This event will be played to completion on the day.

That’s all folks. I have put the rest of my predictions in a sealed envelope! Thank you to all players who have entered the championships, your continued support of the league is very much appreciated. We look forward to seeing you next weekend for what promises to be another enjoyable event.