Following on from the recent success of being voted 2010 Erewash Sports Club of the Year by Erewash Borough Council, Draycott and Long Eaton Table Tennis Club were nominated as a finalist in the Derbyshire Sports Awards - Club of the Year category.

The award is designed to show recognition from local businesses, Derbyshire’s Borough Councils and the Derbyshire County Council for all the volunteers, players and parents who have put in their own time and effort in their chosen sport.

Within our county there are over 1,500 sports clubs who firstly have to be the top club in their respective Borough, in our case Erewash, in order to be selected as one of the eight clubs on to the shortlist for the county.

This is then reduced down to the final two nominees who attended the ceremony. Other nominees this year included Belper Junior Hockey Club who currently have eight England internationals in their squad and Hilton Harriers Football Club who have over two hundred juniors attending their sessions and have 45 qualified coaches to help run their 26 teams. It was Hilton who were the other finalist. 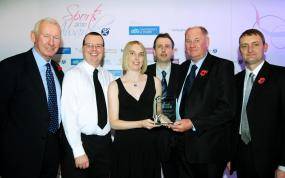 There were 12 recognition awards being presented during the evening together with a special Lifetime Services to Sport Award going to England Badminton International Donna Kellogg.

Over 250 guests and nominees attended the dinner with Bob Wilson the Scottish and Arsenal goalkeeper being the guest speaker.

It was with great personal pride that our Club won the award to become Derbyshire’s Sports Club of the Year 2010.

This is a testament to all the committee members, players, parents, Over 50’s members and volunteers who should all feel very proud to have won this top award.

As Club Chairman and founder member of the club I would like to thank everyone involved for the amount of time and effort you all put in to ensure the smooth running of such a successful Table Tennis Club. This fantastic award finishes off a great year.

The Derby and District Table Tennis Association organises table tennis in the Derby area, which extends to 18 miles from the city centre. The league has 50 teams in 5 divisions playing competitively throughout the winter season. We also aim to actively promote table tennis, and coaching is available at several clubs (see coaching page) and at several schools in the Derby area.

If you are new to table tennis and want to have a go, or if you want to renew your playing career then one of these coaching sessions is a good place to start; otherwise contact one of the league officers for more information.