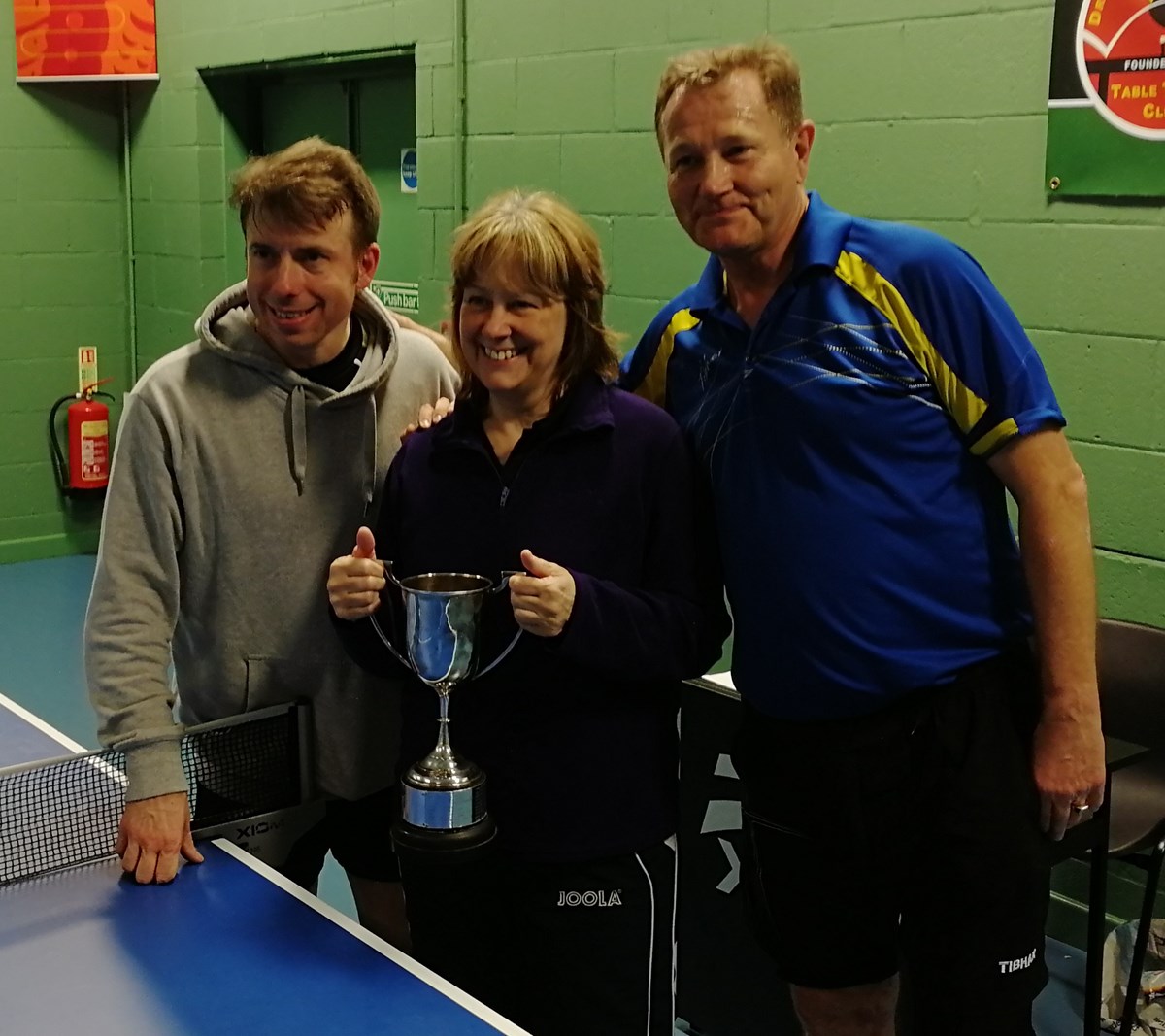 The match between Long Eaton 1 and Jacksdale MW 1 was played at Draycott TTC. Long Eaton, again runners up in the Premier Division, were giving Jacksdale, winners of Division 1, a moderate head start of 54 points. This translated into a required victory margin of 5-6 points per individual match (on average).

Tony Smith (LE, HCP 16) opened proceedings against Nathan Hollingworth (JMW, HCP 34) and gave Long Eaton the start they wanted, winning 33-17 to put them 10 points ahead of the handicap expectation. Dexter Fairbank (JMW, HCP 26) then produced a great performance to beat Jane Vickers (LE, HCP 9) by 30-24 (+12 vs handicap) to swing the match back in Jacksdale’s favour. The third match proved pivotal. Stuart McIntyre (LE, HCP 17) pulled out all the stops in an almost flawless display to beat Nigel Parlor (JMW, HCP 30) by 33-7 (+22 vs handicap) to leave Long Eaton 20 points ahead of par. It was a margin they would keep in the end, but not without some intervening drama.

Jane and Nathan fought out a close encounter, and Jane’s victory margin (31-23) was exactly the par score. The doubles, however, saw Jane and Stuart strengthen Long Eaton’s grip on the match, winning 33-20 (+7 vs handicap) over Nathan and Dexter, in a very entertaining contest.

Trailing par by 27 points, Jacksdale dug in. Nigel narrowly lost to Tony (30-29) to recoup 4 points, Dexter produced a stunning display to beat Stuart 29-22 for 10 points, and Nigel upped his game to get within 3 points of Jane (32-29) for another 4 points. Going into the final two matches, Long Eaton were now only 9 points ahead of par.

The penultimate match saw a clinical display from Stuart to overwhelm Nathan by 33-12 (+15 vs par) which all-but extinguished Jacksdale’s hopes. Dexter, a rapidly improving junior and a genuine joy to watch, now needed to beat Tony by an average of 11-4 per game to snatch the title. It was not impossible … but a cool head and wily old ways saw Tony safely to a narrow loss of 31-30 (-4 vs par) to keep Long Eaton 20 points ahead at the conclusion.

This was a great match to watch, played in a fantastic spirit, and deservedly won by the in-form team on the night. Congratulations to the 2018-2019 Champions, Long Eaton 1.

Thanks also to Draycott TTC for the use of their facilities and to George Taylor for assisting with umpiring.

The Derby and District Table Tennis Association organises table tennis in the Derby area, which extends to 18 miles from the city centre. The league has 50 teams in 5 divisions playing competitively throughout the winter season. We also aim to actively promote table tennis, and coaching is available at several clubs (see coaching page) and at several schools in the Derby area.

If you are new to table tennis and want to have a go, or if you want to renew your playing career then one of these coaching sessions is a good place to start; otherwise contact one of the league officers for more information.