Senior League Week 05
Division 1
Lions B held onto the top spot of the 1st Division on games difference ahead of their A side after wins for both sides this week.

The B side recorded a crushing 9-1 win over a weakened Whistlers B side, due to the absence of Mark Pipet and Phil Hunkin. Phil Ogier and Paul Hainsworth were both on hand to record 3 singles victories over Ben Foss and reserves Luke Le Tissier and Derek Webb. They also teamed to win the doubles encounter over Foss and Le Tissier in straight games. Lions own reserve Martin Sarre picked up a hard fought 5 game win over Le Tissier to add to his straight game win over Webb, however he was edged out by Foss in 5 games in the second match of the evening, sparing the Whistlers' blushes. 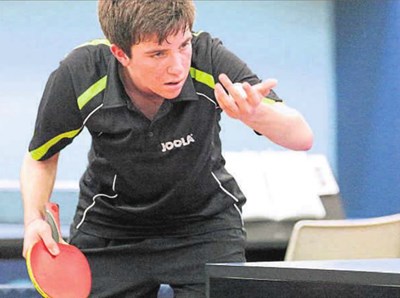 Lions A battled past their C side 6-4 this week to maintain their 100% winning start to the season. Garry Dodd and Liam Robilliard led the way with 2 singles victories each over Joshua Butler and Andre De Carteret before teaming to beat De Carteret and Alex Robinson in a 5 game doubles win. They both tasted defeat for the first time in league action this season to an inspired Alex Robinson (pictured), who did excellently to win his 3 singles matches on the night, his other victory coming against Chloe Le Tissier in 4 games. Le Tissier was the player to obtain the important 6th win for the victors due to her impressive straight game win over De Carteret.
There will be a top of the table clash this week when Lions A and Lions B meet with each side looking to continue with their strong starts to the season.
Division 2
St Pauls A and Whistlers D continued to impress after each side recorded victories this week. Both sides have won their first 4 matches of the season, however it is the St Pauls outfit at the top, owing to their greater games difference ratio.
The St Pauls side were tested this week during their 7-3 win over Lions E and claimed three matches over the full 5 game distance. All 3 of these matches saw the league leaders facing 2-1 deficits, which shows the fighting spirit of the team. Maurice James overturned the deficits against Luke Bichard and Brian Ferbrache and Trevor Bourgaize did likewise during his clash with Cleo Rosumek. Neither player could go the night unbeaten as James lost to Rosumek in 4 games and Bourgaize lost to Bichard in straight games. Chas Elliott added wins over Ferbrache and Rosumek, but also lost to Bichard, ensuring that nobody went through the tough match without tasting defeat. James and Elliott won the doubles against Ferbrache and Bichard in 4 games.
Whistlers D also turned in a 7-3 victory this week, their E side the team defeated on the night. Jez Powell continues to look in cruise control in this division and powered to straight game wins over Ian Fitchet, Sam Kershaw and Len Bretel. Ryan Bichard added an important 5 game win over Bretel, but it came down to a superlative performance from a Junior reserve to see them over the line. Dan Collenette is competing in Division 3 for the first time this season and his continued improvement was in full force as he played some top class table tennis to see off all 3 of his experienced opposition and claim a memorable hat-trick of singles wins. This commenced with a 4 game win over Bretel and culminated with a 5 game win over Kershaw, a 4 game win over Fitchet sandwiched between the 2. The wins were pivotal for the victorious side as the combination of Powell and Bichard were beaten in 5 games by Fitchet and Kershaw in the doubles, squandering a 2 game lead which was clinched for the loss of just 7 points, surely one of the biggest turnarounds in recent Division 2 history.
Division 3
Leaders Lions G had a ghost week and were not in action this week and this enabled Lions H to close the gap courtesy of a 10-0 whitewash of their I side. Lynn Finn, Theo Lepp and reserve Peter Powell all won their singles matches over Jan Priest, Jenny Powell and Bolette Hjorth. Finn and Lepp teamed up to defeat Powell and Hjorth in a straight game doubles win.
Division 4
Lions J kept their 100% winning start in intact when they won their 5th consecutive match and earned their 2nd 10-0 whitewash of the season, Ravenscroft Panthers C the side to feel the pain of the drubbing. Sam Totty, Val Guilbert and Diane Le Page all won against Nick Windsor, Felix Windsor and Mick Ingrouille. Guilbert and Le Page won against Ingrouille and Nick in a 4 game doubles win.
Author: Martin Sarre via Guernsey Table Tennis Association
Article Published: Sunday 19th October 2014
Last Updated: Thursday 23rd October 2014