The top of the table clash between the 2 sides yet to drop a point ended as a 5-5 draw, meaning that Lions B still top the division on games difference ahead of their A side.

The final remaining 100% singles record was also lost on the evening as Paul Hainsworth was defeated firstly in 4 games by last season's team-mate Liam Robilliard and then in straight games by Garry Dodd (pictured). 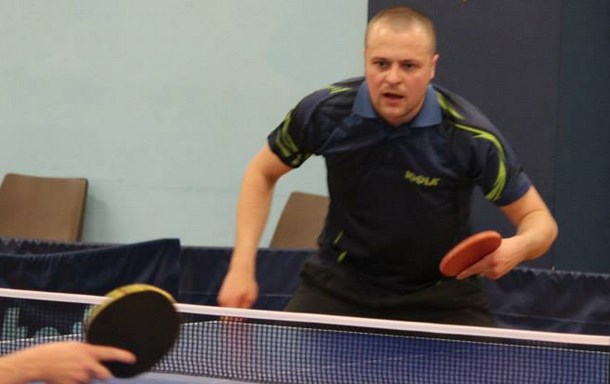 Dodd also added wins over Phil Ogier in 4 and reserve Matt Stubbington in straight games. Robilliard added a straight game win over Stubbington to obtain the A side's 5th rubber, however they were unable to add the pivotal 6th. Ogier led the way for the league leaders due to his straight game wins over Robilliard and Chloe Le Tissier and he combined with Hainsworth to earn victory in the important doubles fixture against Dodd and Le Tissier. The A side were looking strong in the encounter whilst leading 2-1 and with a 9-7 advantage in the 4th but were unable to close proceedings and were edged 12-10. The final end was another tight affair, but it was the B side who took it 11-8. In the remaining 2 matches, Hainsworth defeated Le Tissier in straight games and Stubbington repeated the result, in 4 games to ensure that honours were even.

Whistlers A are the chasing side and their shortfall to the top was cut by 1 point to 3 points due to their 7-3 win over Lions C. With Joshua Stacey absent due to illness, twin Lawrence stepped up to the plate and put in a man of the match unbeaten performance. He defeated Andre De Carteret and Alex Robinson in straight games before finishing his night off with a hard fought 5 game win over Joshua Butler, reversing a 2-1 deficit in the process. He also teamed with Dawn Morgan to win the doubles clash over Robinson and De Carteret in 4 games. Morgan herself also had a good night, despite losing her opening singles match of the night against Robinson in straight games. She beat De Carteret in straight games before adding an impressive 4 game win over Butler. The other win for the victors came courtesy of a straight game win for reserve Martin Sarre over De Carteret.

St Pauls B and Whistlers D continue to impress and after 5 matches, the sides are still unable to be separated by points, the St Pauls B side still leading the way only due to a superior games difference.

The St Pauls side ran out 7-3 winners in a match with Lions D that looked on paper like a potential banana skin. Chas Elliott was the form player on the evening as he added singles wins over reserve Luke Le Tissier, Ian Le Page and Martin Sarre, the latter in 5 games and the former matches in straight games. The 5 set win over Sarre was a particular highlight as it came in the 2nd match of the evening with the St Pauls side leading 1-0. Sarre had cruised through the opening 2 legs for the loss of just 7 points and the result looked an absolute formality before Elliott incredibly came through the remaining 3 games. Elliott was backed up well by his team-mates Maurice James and Trevor Bourgaize who both contributed to the win. James defeated Le Tissier in 4 and Le Page in straight games and teamed with Bourgaize to defeat the combination of Sarre and Le Tissier in a 4 game doubles triumph. Bourgaize added a singles win of his own in the opening match of the evening, 4 games needed to see off the challenge of Le Page.

Whistlers D did close the games difference gap this week by 2 following their 8-2 win over Whistlers F. Jez Powell remains unbeaten and added singles wins over Joseph Bourgaize, Vikki Stacey and Andy Lihou, however he dropped only his 3rd singles end of the season during his clash with Lihou in the final match of the evening. Junior Ryan Bichard had a good night at the office as he also picked up singles wins over his opposition before teaming with Powell to edge Lihou and Bourgaize 11-9 in the 5th game of their doubles match. After last week's heroic efforts, 3rd division reserve Dan Collenette followed up this week with a handy 4 game win over Stacey. Lihou and Bourgaize both earned consolation wins over Collenette.

Lions G continue to impress in their return to local table tennis and they produced their 3rd consecutive 8-2 win of the season this week, their I side the beaten outfit. Jamie Ferbrache is yet to lose this season and he defeated Jan Priest, Jenny Powell and Bolette Hjorth without dropping an end. Andrew Ferbrache has also performed well and was also able to convert 3 singles victories on the night, but 5 games were required against Powell and Hjorth and 4 during his final match of the evening tie with Priest. Sophie Ferbrache has been adding wins each week and she did not fail to repeat the feat this week, defeating Priest in straight games in addition to winning the doubles with uncle Andrew over Priest and Powell in 5 games.

Lions J recorded their 6th consecutive win of the season and 2nd successive 10-0 win as they inflicted the whitewash on their fellow Lions side, Lions L. Sam Totty, Diane Le Page and reserve Val Le Messurier all put in good performances on the night and beat Tony Brassell, Christine Brassell and James Le Tissier. Totty and Le Page won the doubles match against the Brassell's in 4 games.