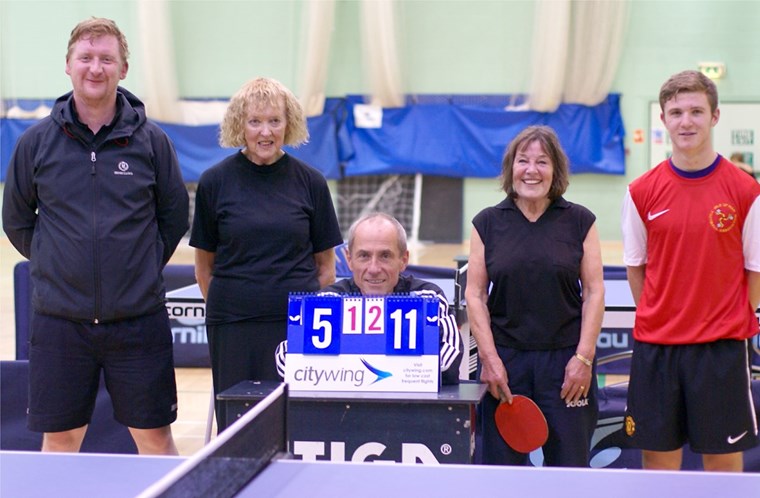 Tower’s Margaret Forsyth, who still plays with her original 1950’s Dunlop Barna hard bat, was teamed up with the Island Champion Ronan McDonnell. There may have been over half a century age difference between them, but the combination of youth and experience proved to be a winner, and in meant that McDonnell retained the trophy he won last year with his Copy Shop colleague Kevin Drury.

32 players from all the divisions were ceded on their league rankings, with the highest ceded player partnering the lowest and each subsequent pairing being the next highest and lowest ranked player. There were some anomalies particularly as last minute reshuffles were needed to accommodate late substitutes who willingly replaced a few ‘no shows’. Two groups of eight teams had been drawn and the matches were played over three sets on a round robin basis with the top two teams from each group going on to compete in the semi-finals.

Group A was dominated by Paul Corran and the competition’s oldest player, Pat Halliwell, who was not expecting to play, but was delighted to do so. They won all their matches including a 5/11, 11/8, 11/8 victory over the eventual tournament winners McDonnell and Forsyth who won their remaining group matches. Another pairing with over 50 years age difference between them, Graham McFarlane and Juan Moore, narrowly missed making the latter stages. They lost 6/11, 11/9, 9/11 to the group winners and 10/12, 14/12, 8/11 to McDonnell and Forsyth.

It was great to see Les Wilson back after his illness. He was whacking the ball about and no doubt imparting pearls of wisdom and encouragement to young Harry Walters who had immense pleasure in beating his brother Joe who lost out 9/11 with Jason Quirk in the final frame of the fourth place play-off.

There were some raised eyebrows relating to the relatively strong pairing of Liam Chan and David Buck in Group B. Only one team, Marc Townsend and Jack Nelson, managed to muscle a set out of them, mainly because Townsend regularly practices with Chan. All the other teams struggled to return Chan’s heavy top-spin, even when he was holding back! When they did sky it back, Buck bashed the ball away for another winner.

Malcolm Lambert and Maurice Campbell was another controversial pairing as they both play in Division Two and have over eighty years league experience between them. Perhaps not surprisingly they finished in second spot just ahead of Townsend and young Nelson who they narrowly beat 12/10, 7/11, 11/9. Townsend and Nelson were also involved in the longest game of the evening when, in a tight tussle, they took the final set 20/18 against Steve Curtis and Steve Walters to determine fourth place.

The group rounds finished as follows:

In the first semi-final Forsyth used her considerable doubles experience, including representing the Island in vet: competitions, by craftily blocking back Chan’s fizzing forehands and, together with the spin master, McDonnell, they outmanoeuvred Chan and Buck to reach the final 14/16, 11/8, 11/7. The second semi was more one-sided as Lambert and Campbell were comprehensively clobbered 8/11, 4/11 by Halliwell and the hard hitting Corran.

The crowd gathered round to watch the final which turned into a tactical treat. Whenever McDonnell and Corran received each other’s shots they didn’t hold back, both going for that decisive hit which would end the rally. Conversely, when facing their less experienced opponents they graciously controlled their game, playing the angles rather than smashing the killing shot. Thus Forsyth and Halliwell were well involved, dancing around the table trying to retrieve and deceive their opponents with their own carefully considered returns.

It was no surprise that at the end of a long night of intensive play both ladies began to flag. This may have influenced the outcome. Halliwell and Corrin hadn’t lost a match all evening but, in a reversal of their earlier encounter, Forsyth and McDonnell came through 11/3, 9/11, 11/5, 11/8 to take the title.

It was an enjoyable evening well organised by IOMTTA Chairman Maggie Mulhern, ably assisted by Les Wilson. Numbers were up again this year and it was encouraging to see the more senior players coaching the youngsters and adapting their games helping to make the tournament to live up to its name, the Fun Doubles.