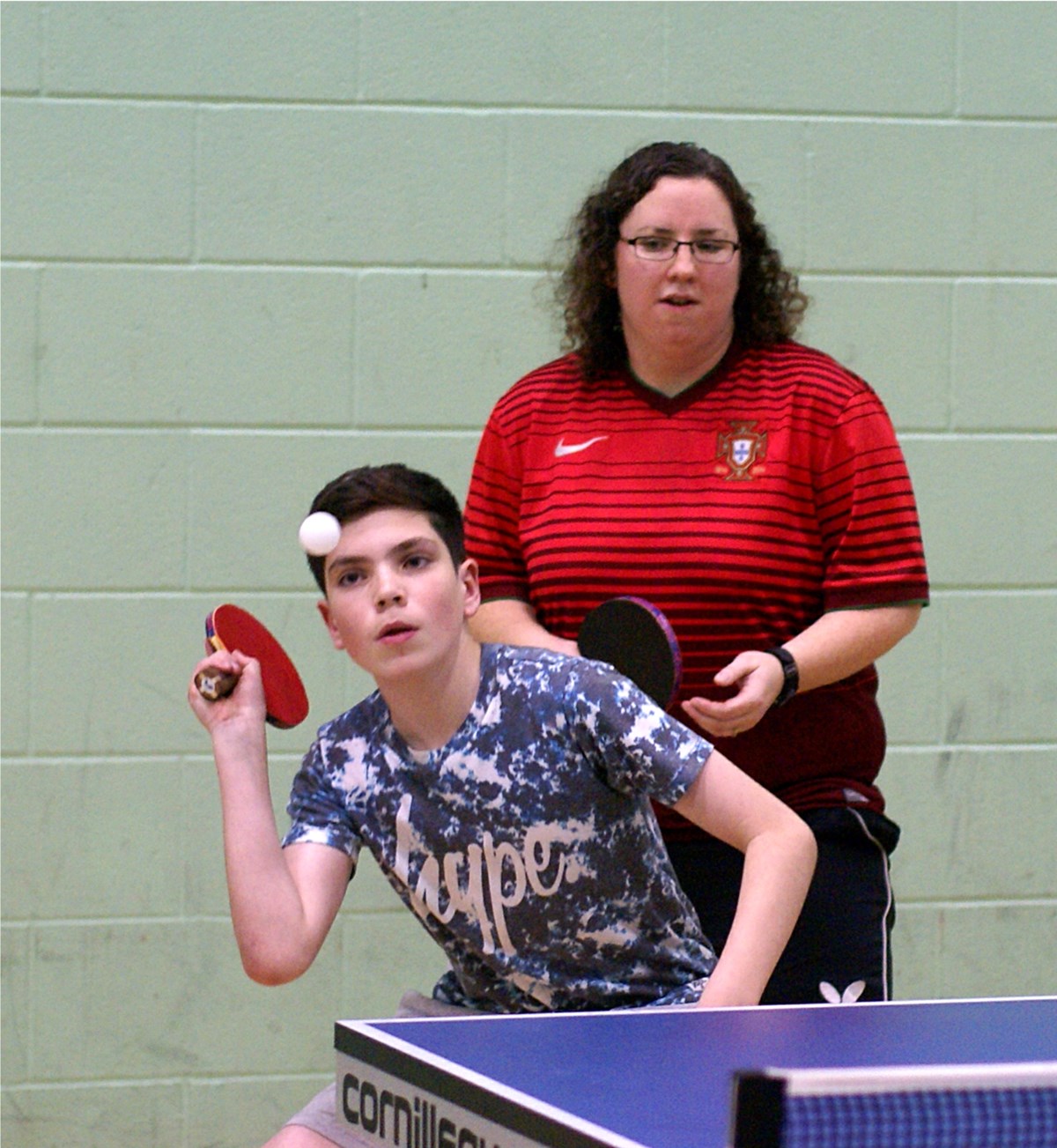 Top seed Jane Kneale and Peel B’s Harry Walters were crowned the fun doubles table tennis champions 2015 at the NSC last week. Kneale is the current Greystone LLC sponsored Island Closed Ladies Singles Champion but she suffered an injury during the Island Games in Jersey and is not currently playing in the league. However, Kneale was extremely fortunate to be paired with rising Second Division star Walters who entered the competition as a late substitute. 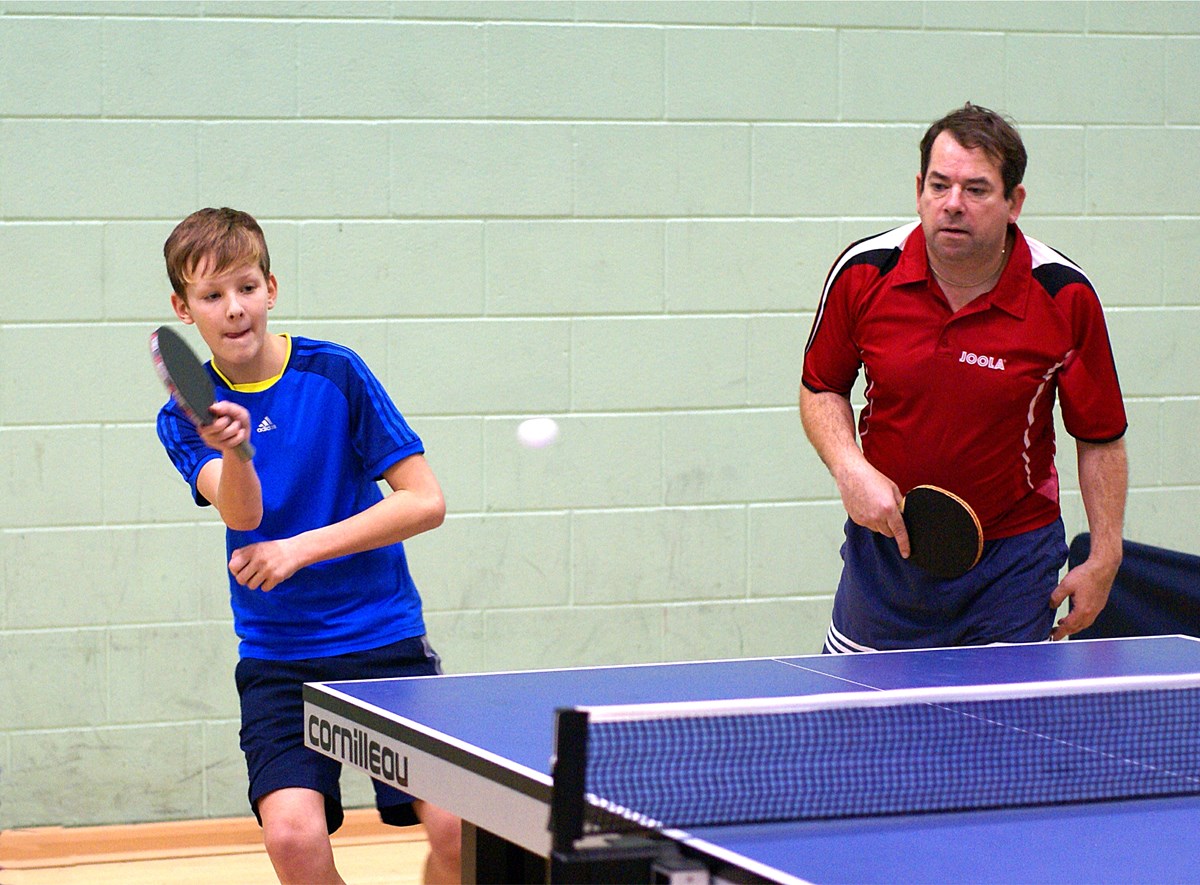 The second seed Copy Shop A’s Adam Davies, who won the title last year with Maurice Campbell, reached the final again this year but history did not repeat itself. He and Haydn Waddington from the Junior Development squad exceeded expectations as their only loss all night was in the final. Crucially, Kneale’s arm held out and Walters whacked anything which was up, so they won the final relatively comfortably 11/7, 11/7, 11/9.

30 players from all the divisions had been seeded on their league rankings, with the highest seeded player partnering the lowest and each subsequent pairing being the next highest and lowest ranked player. There were a few anomalies as late substitutes willingly replaced a few ‘no shows’ and time did not allow for pairing revisions. Two groups had been pre-drawn and the games were played over three sets on a round robin basis with the top two teams from each group progressing to the best of five sets semi-finals.

Group A was topped by Davies and league debutant Waddington who remained unbeaten although they had a real scare against Paul Nelson and Lauren Allwright (Junior Development) who only lost on a tie-break 11/9, 9/11, 12/14 which typified their hard luck throughout the evening. 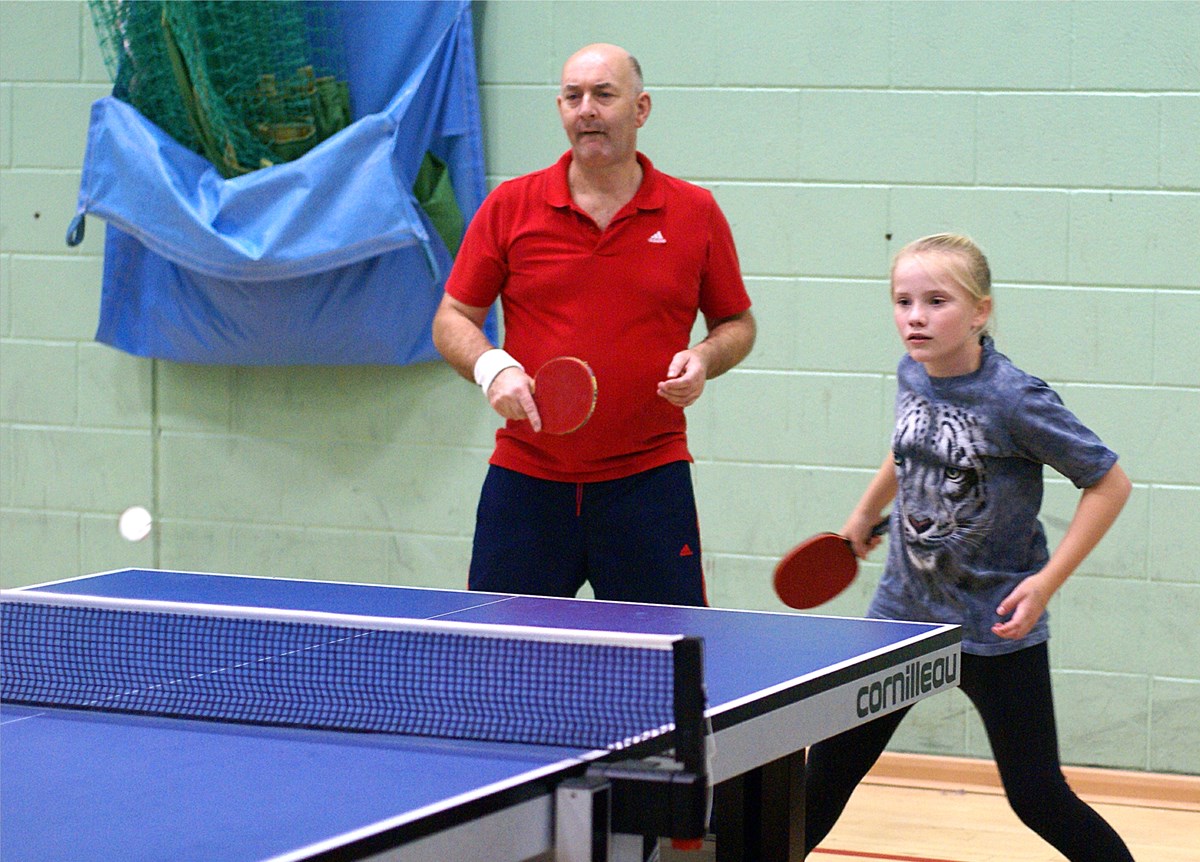 Malcolm Lambert and his partner Yanchun Wang, who is yet to play in the league this season, lost their first two matches but won the remainder to finish as group runners-up with five wins.

In fifth-place Maggie Mulhern and Heather Kennett enjoyed three wins, the most vital of which was their straight sets victory over Jack ‘Granddad’ Yardley and Barry Jenkins who also secured three points for sixth-place. David Buck the MD of Citywing, our scoreboards sponsor, had some near misses but landed two wins with the aid of his young co-pilot Dylan Yardley. They beat Brown and Faragher 11/6, 11/6 and the unfortunate wooden spoon winners Nelson and Allwright.

Group B was dominated by the tournament winners Kneale and Walters which was not too surprising given late substitute Walters’ high standing in the Division Two averages. Just one team managed to take a set off them and that was the relatively experienced second-placed pairing of Alex Buck and Jackie Gill who hooked the runners-up spot. They ended with four wins just ahead of Steve Curtis and young Jack Mathieson-Nelson who they had defeated 11/7, 11/8 in what turned-out to be the knock-out stage decider. 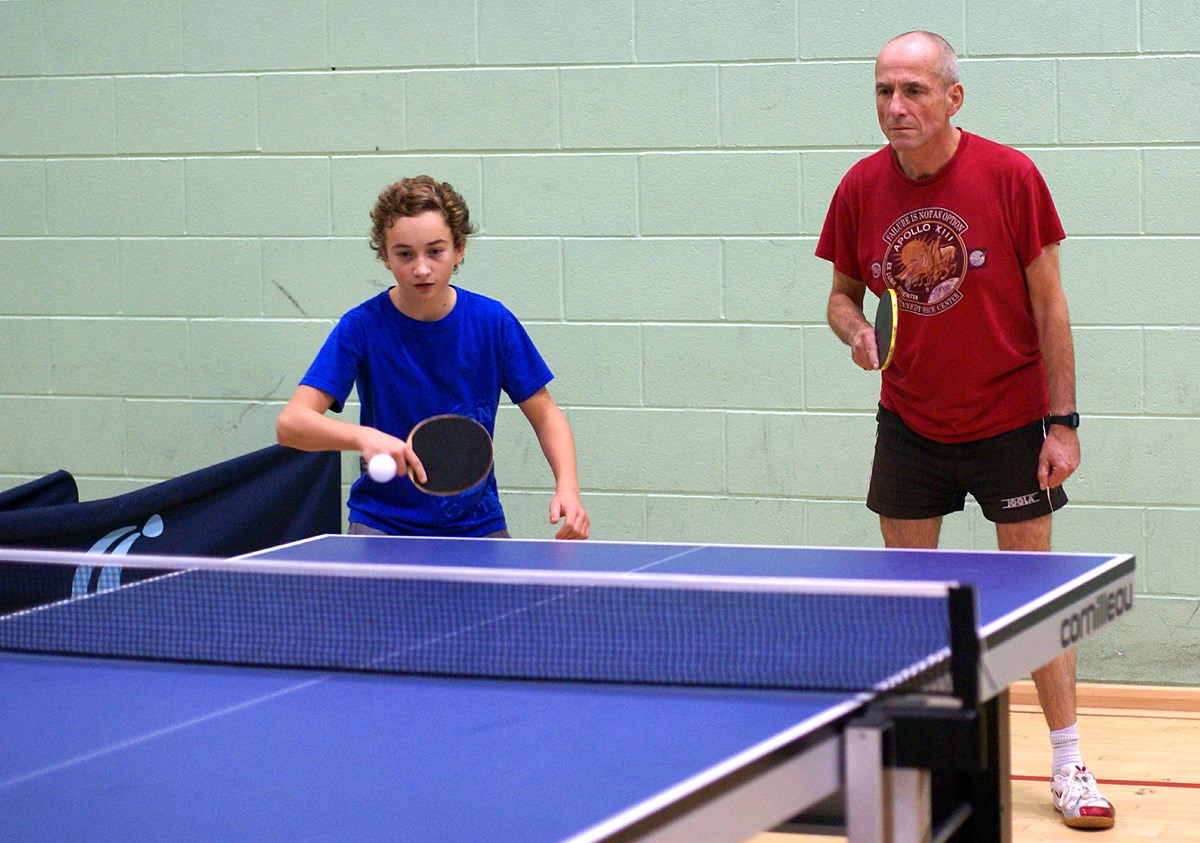 Mike Denning and young Alex Yardley really went for their shots and this paid off, half the time, as they won three of their six matches to finish in fourth-place by beating Pat Halliwell and Matty Evans 9/11, 11/3, 11/9. Alex’s dad Rhys Yardley and Sam Preece (Junior Development) met Graham McFarlane and Dillon Dowson (Junior Development) in the last match of the round-robin and they were both looking to register their first win. 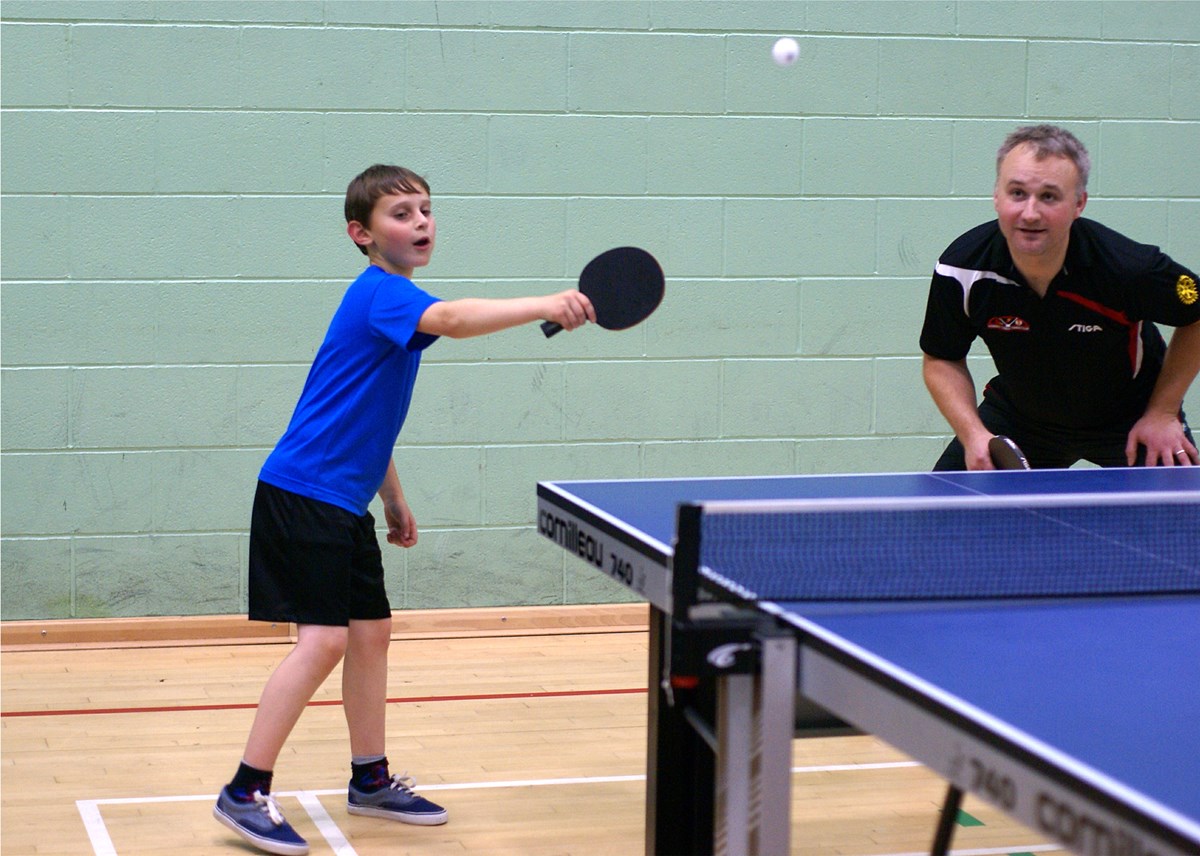 Showing remarkable restraint Rhys and McFarlane lobbed the ball back and forth coaching the youngsters and giving them the chance to try out their smashes. Preece passed Dowson just once too often as only two points separated the teams at the end of three sets. Rhys and Preece narrowly avoided the wooden spoon 11/4, 4/11, 11/9.

Despite some stout defence Kneale and Walters blasted past Lambert and Wang 11/5, 12/10, 11/9 in the first semi-final but the second semi was an even closer affair. Davies and Waddington found Gill and Alex Buck to be a very steady pair. Gill worked the angles while Buck went for the winners. Waddington defended defiantly and Davies showed his determination by finishing off anything which was returned high or too softly.

Hence, Waddington was delighted to be contesting his first final in his very first tournament and Davies had made it to the final for the second year running. However, the 11/9, 11/9, 11/8 semi-final score line indicates just how closely matched those two teams were.

Many stayed on to watch the entertaining final which, as highlighted above, was won convincingly by Kneale and Walters. All agreed it had been an enjoyable evening, well organised by IOMTTA Chairman Maggie Mulhern. Entry numbers for this half-term event were good and it was encouraging to see the more senior players coaching the youngsters and adapting their games helping to make the tournament live up to its name, the Fun Doubles.