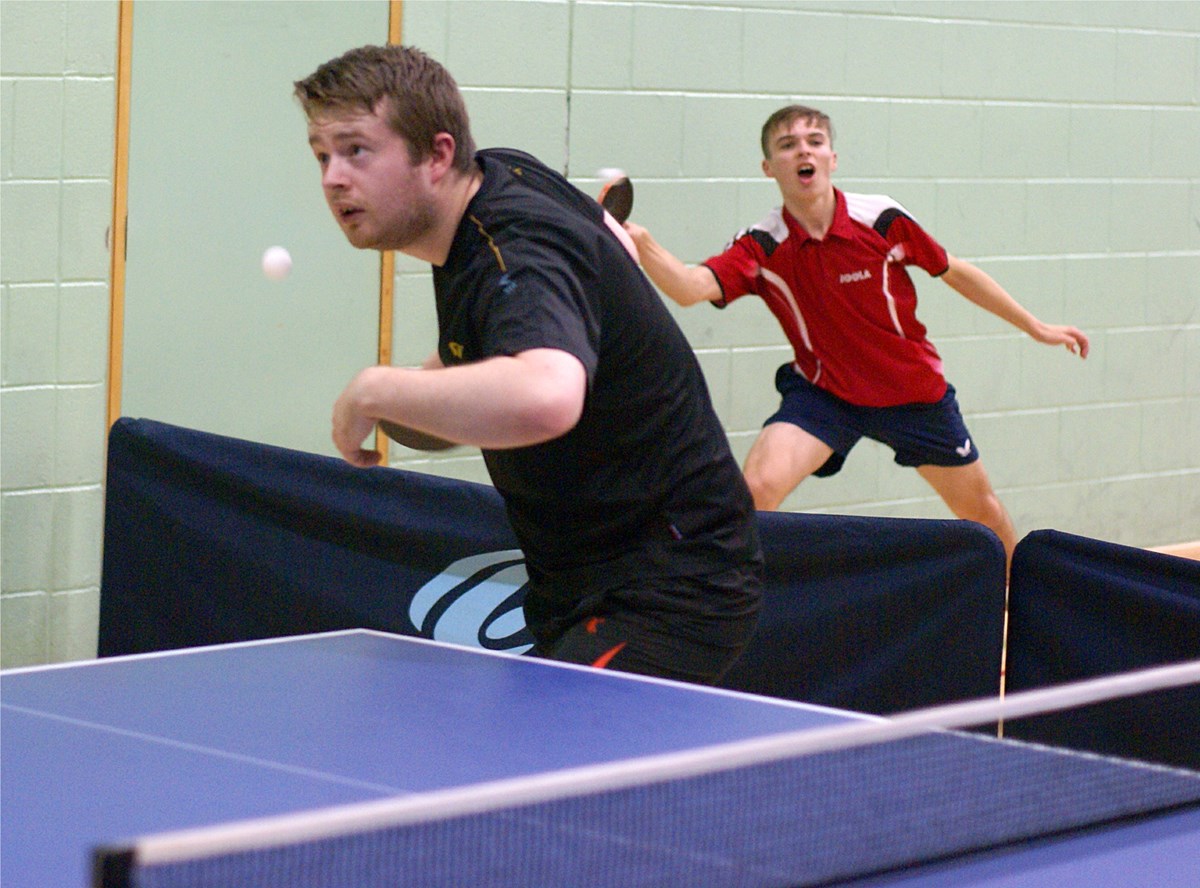 This week in the DLP Adapted Bathrooms sponsored Isle of Man Table Tennis League the six Division One teams competed in the first of three Grand Prix events. Points from 25 for the event winner down to 1 for finishing 18th were on offer. Cumulative points will determine the team championship winner. The individual champion will be the player with the most points from their best two events.

Each team selected three players ranked on their league averages and in the first phase of round-robin matches six groups consisting of a ranked 1, 2 and 3 player from different clubs were drawn. The winners, runner-ups and bottom placed players from phase one then competed in the appropriate next round-robin section to establish their event finishing position from 1-6, 7-12 and 13-18 respectively.

This inaugural event produced some stunning table tennis. The fast and furious final between the current Junior and Senior Top 12 titles holder, Sean Drewry (Copy Shop), and his opponent Sam Bailey (Arbory) , who finished as runner-up to Ronan McDonnell in the 2014/15 Divisional Championships, was no exception. Bailey, coiled like a cobra, struck with incredible speed while Drewry danced around like a jack in the box retrieving from impossible angles. Consequently, Bailey was forced to go for broke but Drewry was irrepressible and triumphed 11/8, 11/8, 11/6.

Staging the grand prix curtailed the number of league matches that could be played and so most of the Division Three players had a rest week. In Division Two Tower B consolidated their lead with a 10-0 win over bottom-placed Surestrike Ramsey C and the youngsters from Peel B remained in second-place after beating sixth-placed Travellers D.

Sam Bailey, Sean Drewry and Liam Chan (Travellers) were the top three ranked players based on league results and as expected they won all their round-robin group matches to reach the positions 1-6 phase two section. The over 60’s championship title holder Graham McFarlane (Tower) caused an upset by beating the over 50’s title holder Andy Horne (Strathallan) 11/7, 11/1, 11/8 to top their group.

Recent returnee Adam Teare was Surestrike Ramsey’s top seed but was narrowly beaten into second place in his group after losing 11/4, 11/13, 10/12, 11/5, 7/11 to Copy Shop’s Paul Corran who was the runner-up to Chan in last season’s Greystone LLC sponsored Island Closed Championship. In the final group Tower’s top player Paul Kozlowski lost in a tie-break extravaganza 12/10, 11/7, 10/12, 4/11, 12/14 to Arbory’s number two player Mike Tamarov who topped their group by defeating Patterson (Strathallan) who had earlier beaten Kozlowski.

Malcolm Cummings and Julian Briercliffe were the second seeds for Travellers and Strathallan respectively. They both secured their places in the 7-12 phase two section. Cummings had a walk-over in his depleted phase one group as Tower failed to field a third seed. Meanwhile, Briercliffe lost to Drewry but survived a titanic tussle to sink Tim Baker (substituting for Surestrike Ramsey A) 11/5, 9/11, 9/11, 11/6, 12/10.

Bailey beat Tamarov 16/14 at the end of their fourth set and despite losing a first set tie-break to Liam Chan he went on to win 10/12, 11/7, 11/8, 11/5. That put him in the positions 1/2 play-off against Drewry who didn’t drop a set in his group matches with Corran and McFarlane who also lost in straight sets to Corran.

Teare and Cummings both beat Keeran Chan who later lost to Horne 6/11, 8/11, 14/12, 6/11 in the positions 11/12 play-off. Cummings finished drenched in sweat after a particularly long match with Teare who won 11/9, 15/13, 8/11, 5/11, 11/7 to reach the positions 7/8 play-off where he defeated Patterson who had earlier beaten his club-mates Briercliffe and Horne. Briercliffe went on to beat an exhausted Cummins in straight sets to settle their positions 9/10 match.

With Tower failing to field a third player there was no 18th place and Tim Baker had to accept 17th position after withdrawing in order to play his Division Two league match. Kozlowski won all three of the round-robin matches to finish 13th. In 14th place Paul Nelson (Travellers) won two and Rhys Yardley (Surestrike Ramsey) came 15th as he left Adam Davies (Copy Shop) without a win but picking up three valuable team points for being placed 16th.

Third-placed Peel A played solidly to secure the win with two points apiece from Matty Evans, Maggie Mulhern and Malc Lewis. Jack Craik took Mulhern to the final frame only to fade 8/11. Kerenza Baker had three tie-breakers go against her so she was pipped at the post.  Once again top-seed Tim Baker notched-up a hat-trick for eight-placed Surestrike B and then he, and his daughter Kerenza, dug-in to deliver the doubles 10/12, 11/7, 11/8, 11/13, 11/3.

Experienced Mike Dunning hit a hat-trick for sixth-placed Travellers D but the young Peel B side consolidated their second-place by taking all the remaining points against their contemporaries. However, Nathan Evans had to survive a marathon first set 19/17 against Travellers’ Alex Buck who was also unlucky to lose to Harry Walters in five close sets. Sasha Thomas didn’t drop a set against Buck or Jack Nelson who reached 11/13 in one of his sets against Thomas.

Top-placed Tower now have a six point lead following this emphatic victory over the bottom placed side who are finding it a challenge to compete in a higher league. Billy Cain took sets off Steve Curtis and Dario Mazzotta but substitute Jack Yardley and young Matthew Emison both struggled to win points off Simon Radcliffe and his Tower team-mates.

Tommy Cowin and Juan Moore won the doubles and were both hat-trick heroes for Travellers B. Colin Barron looked on course to join them but his service style was called into question at the end of his successful match with Jackie Gill. That interruption played on his mind and as he struggled not to offend his game went to pieces. Consequently, Alan Harding and Adrian Tinkler were able to take advantage.

Rob Sim made a successful return for fifth-placed Copy Shop B. His hat-trick and doubles win with Kevin Drewry helped secure their win over their ninth-placed club-mates. Drewry added another two points with wins over Max Walker and Joe Walters. Ben Christian hit back for the C team with fine attacking play against Drewry and a slightly more inconsistent performance 11/6, 6/11, 11/7, 7/11, 12/10 against Freya Melvin who also lost to Walker but played brilliantly to beat Walters in four sets.

Both teams were looking for their first win of the season and the B team were gifted their three points as the A team were one player short. This did not faze Callan Reed and Louis Faragher who dropped just three sets in securing their hat-tricks and then the doubles. Sam Preece, Lauren Allwright and Nathan Jones showed plenty of promise in some cracking rallies and they were never afraid to go for their shots.