COPY SHOP’S A TEAM RETURN TO THE TOP

Copy Shop A took advantage of Arbory’s rest week to return to the top of Division One of the DLP Adapted Bathrooms sponsored Isle of Man Table Tennis League. Near the bottom of Travellers A are now just one point away from the relegation zone.

Tower B stretched their lead at the top of Division Two to ten points over Peel A who have a game in hand. The teachers from St Ninian’s won their second match of the season and are keen to avoid relegation so that they can play against their counterparts from Kings who look likely to be promoted from Division Three.

Both Copy Shop D and Tower C maintained momentum in their bid to take the second promotion place from Division Three.

Copy Shop really did have their A team out in order to take back top-place with this white-wash over fourth-placed Travellers. Stu Douglas got up to 8/11 against Ronan McDonnell. Malcolm Cummings took a tie-breaker set off Sean Drewry while Liam Chan stretched Paul Corran to a tantalising fifth set only to lose 13/11, 2/11, 7/11, 11/7, 9/11.

Strathallan A (4) Surestrike Ramsey A (5)

Adam Teare’s superb hat-trick plus a point apiece from Rhys Yardley and Wael Kassim helped secure Surestrike’s second win of the season and move them closer to salvation. It also caused consternation for Travellers A as there is now just one between them. Andy Patterson and Julian Briercliffe scored all four points for third-placed Strathy as Andy Horne couldn’t cause enough confusion with his pimples-out rubber. Kassim’s 6/11, 3/11, 13/11, 11/8, 11/8 turnaround was typical of how Horne’s evening went.

Copy Shop C were without two of their regular players so called in coach Malcolm Lambert who failed in his opening match with Matt Harvey who went on to a great hat-trick. Matty Kelly added two more for the teachers and joined the hat-trick hero to take the doubles. Joe Walters and super-substitute Cameron Dudley from Copy Shop F both beat Matt’s brother Mark T. Harvey who hasn’t picked-up a bat since leaving school many years ago.

Top of the table Tower B were made to fight for their eighth win of the season. Mike Dunning hit another hat-trick for sixth-placed Travellers D and then joined with David Buck to deliver the doubles 16/14, 8/11, 8/11, 11/8, 11/8. Steve Curtis, Simon Radcliffe and Dario Mazzotta had to be content with procuring their points from Buck and Jack Mathieson-Nelson. Travellers dropped back a place as a result.

Alan Harding, Jackie Gill, Adrian Tinkler and Maurice Campbell (doubles) charged up to sixth-place following this convincing win over their bottom-placed opponents who came up last season. Nathan Walker figured-out the angles to beat Gill 11/9, 11/6, 8/11, 11/9 but Frank Feeney and substitute Jack Yardley were restricted to the odd set. 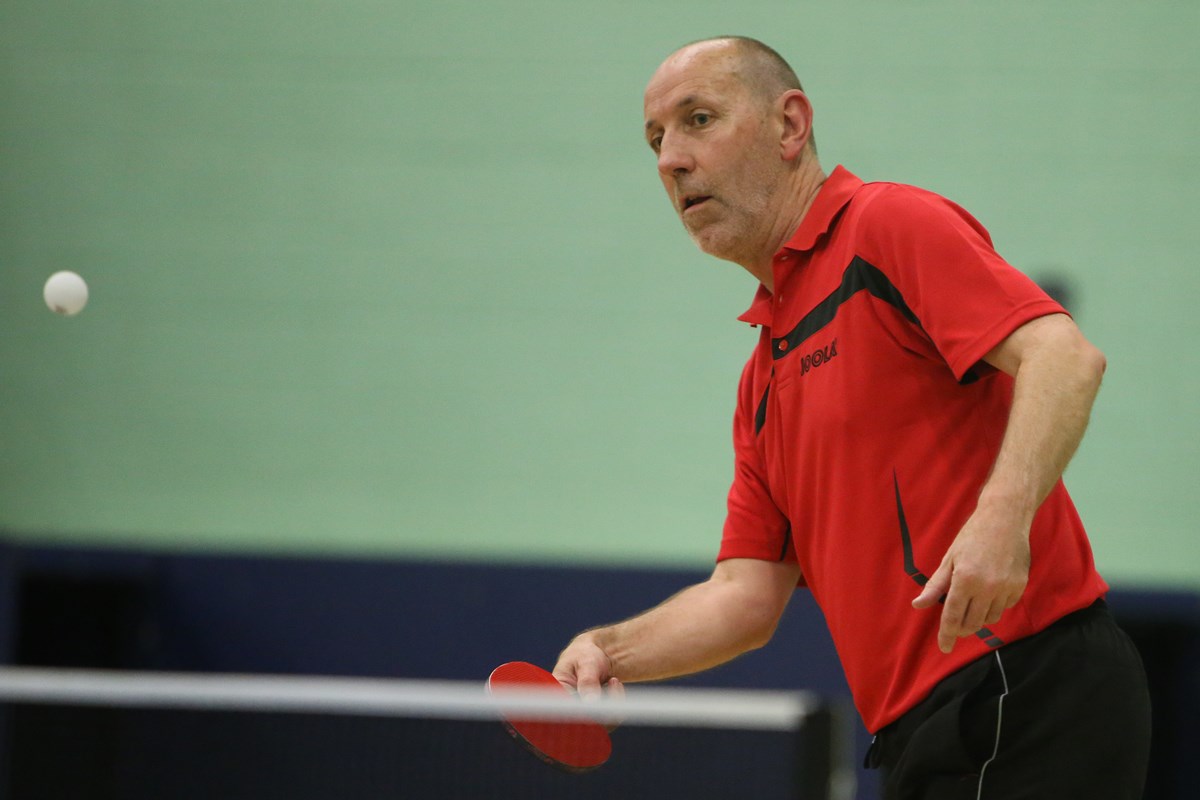 Malc Lewis dropped just two sets on his way to a fine hat-trick and a doubles win with Matty Evans for second-placed Peel A. Evans added two more points with wins over Kevin Drewry and Freya Melvin who also lost to Maggie Mulhern. Copy Shop’s left-hander Rob Sim smashed past Mulhern whereas Drewry needed five oscillating sets to beat the IOMTTA chairman. Sim snatched his second point 11/9 in the final frame against Evans who had earlier won a real nail-biter 6/11, 13/15, 11/8, 11/3, 14/12 against Drewry.

Travellers B (6) Surestrike Ramsey B (4)

Another hat-trick from mid-tabled Surestrike Ramsey B’s Tim Baker and a doubles win with his daughter Kerenza was not enough to stop third-placed Travellers B from recording their sixth win of the season. Juan Moore, Tommy Cowin and Colin Barron each added two points by beating the youngsters Jack Craik and Kerenza who was thwarted in her 9/11, 13/11, 9/11, 11/9, 9/11 heart-breaker with Barron.

Seventh-placed Surestrike D leap-frogged their opponents with this fine win spear-headed by a hat-trick from Jack Yardley. His grandsons Alex and Dylan Yardley did him proud with two points apiece against Josh Dudley and Leo Doyle and then they took the doubles in straight sets. Scott Horne hit back for Copy Shop dropping just one set in doing the double over the youngsters from Ramsey.

Matt Crabtree, Tom Keating and Stephen Jelly kept the Kings on top with this white-wash over their fifth-placed opponents. Pat Halliwell took a set and lost a tie-breaker against Crabtree who has not dropped a point all season. Libby Quaggin did similar against Jelly and Sophie Sheard encouragingly appeared undaunted against the school teachers from King Bill’s.

The vets from Tower C are keen to return to Division Two and so were never going to make it easy for Sam Preece, Lauren Allwright or William Shooter who are experiencing their first season in the senior league. Harry Jenkins, Margaret Forsyth and Heather Kennett didn’t drop a set and as a result have reduced the deficit to second-placed Copy Shop D to just five points.

Tiernan Garvey’s triple against fourth-place Surestrike was a great effort. Tyler Hannay, Liam Cooper and Stuart Watson did not have it all their own way against Haydn Waddington and Archie Walter from eighth-placed Peel. Waddington took Watson to a fifth set and Walter had two tie-breaks go against him in their 10/12, 6/11, 12/14 encounter.