Copy Shop A extended their lead to seven points at the top of Division One of the DLP Adapted Bathrooms sponsored Isle of Man Table Tennis League. Arbory are now seven points behind but do have a game in hand. Bottom placed Tower A look likely to tumble as they are eight points adrift of Surestrike Ramsey A and are yet to wangle a win.

Tower B had a rest night so their lead at the top of Division Two has shrunk to five points over Peel A who were held to a draw by third-placed Travellers B. Copy Shop C can breathe a little easier as they are now 19 points clear of St Ninian’s who, along with Surestrike Ramsey C, look likely to boomerang back to the Third Division.

Tower C’s 10-0 win has reduced the difference between them and second-placed Copy Shop D to two points but Kings are still regally placed to be crowned the Division Three champions in their inaugural season.

Paul Kozlowski struck early for bottom-placed Tower by beating Jane Kneale who has been out injured for several months. Kneale almost shook off the ring rust but lost 2/11, 7/11, 11/9, 11/8, 9/11. After that it was one-way traffic for table topping Copy Shop. Sean Drewry and Paul Corran hardly dropped a set on their way to hat-tricks against Kozlowski, Graham McFarlane and Dario Mazzotta.

Sam Bailey and John Magnall were both hat-trick heroes for second-placed Arbory. Keeran Chan lost to both Andy Patterson and Ian Kelly of third-placed Strathy then took the final point for Arbory 8/11, 12/10, 12/10, 11/6 in a tie-break tussle with Andy Horne. Arbory are due to play the league leaders Copy Shop A on December 9th and the result could be pivotal in deciding the championship.

Super-sub Billy Coulter dropped just one set to record a hat-trick as did Max Walker which helped ninth-placed Copy Shop C to secure their second win of the season. Joe Walters overcame Matthew Emison but lost in straight sets to Frank Feeney and then 11/4, 5/11, 9/11, 12/10, 8/11 in a ding-dong battle with Sally Green from bottom-placed Surestrike C.

Kevin Drewry, Rob Sim and Freya Melvin from fifth-placed Copy Shop B all beat David Buck and Jack Mathieson-Nelson who had been 2-1 up in sets against Melvin before her forehand clicked into place. Jack’s dad Paul has been concentrating on coaching but showed he has not lost his touch by hitting a hat-trick and winning the doubles with Buck. This result saw Travellers D drop back to eighth-place.

Maurice Campbell was unbeaten for sixth-place Travellers C but his team-mate Alan Harding had one of those nights when he felt strangely discombobulated. Jackie Gill also lost to Sasha Thomas and Harry Walters but out-foxed Nathan Evans 8/11, 11/5, 11/9, 11/7. Winning the doubles and the match kept the youngster from Peel B in joint fourth-place.

Surestrike B moved up two places to sixth-place after skittling out their relegation zoned opponents. Kerenza Baker, Jack Craik and Tim Baker looked on track for a full clearance having already toppled Matt Harvey and his brother Mark. Matty Kelly had no answer to the onslaught from Tim and Craik but got his eye to pick up the spare 11/5, 11/9, 12/14, 7/11, 11/6 against Kerenza.

Second were playing third so a close match was expected. Juan Moore breezed past Mattie Evans and Malc Lewis but solid defence from Maggie Mulhern almost prevailed but Moore won their close encounter 11/6, 8/11, 12/14, 11/8, 11/9. Tommy Cowin ensured the draw by beating Evans and Mulhern. Peel posted their points by beating Colin Barron and after Lewis disappointed Cowin 11/9 in their final frame Lewis he and Evans delivered the doubles to snatch a draw.

Matt Crabtree, Tom Keating and Stephen Jelly, the school teachers from Kings, gave a lesson in table tennis to Alex and Dylan Yardley from seventh-placed Surestrike D. However, the league leaders did not have it all their own way. Jack Yardley showed his grandsons how it should be done by beating Keating and Jelly but Crabtree maintained his unbeaten run 13/11, 11/6, 11/8.

Barry Jenkins, Margaret Forsyth and Mike Chapman appeared to be in a hurry to get home as they only dropped two sets against the league newbies. Dillon Dowson got to 8/11 a couple of times, Callan Reed forced Forsyth into a fourth set, as did Louis Faragher who got to 12 points twice only to lose 7/11, 12/10, 9/11, 12/14. Tower remain third and are now only three points behind Copy Shop D.

Eighth-placed Peel C broke their duck in style. Tiernan Garvey, Haydn Waddington and Archie Walter took all ten points from Sam Preece, Lauren Allwright and William Shooter. The latter two taking Walter to a fourth set only to lose 9/11 in both cases. However, the overall result obscures the undoubted progress that the JD youngsters have made this season. 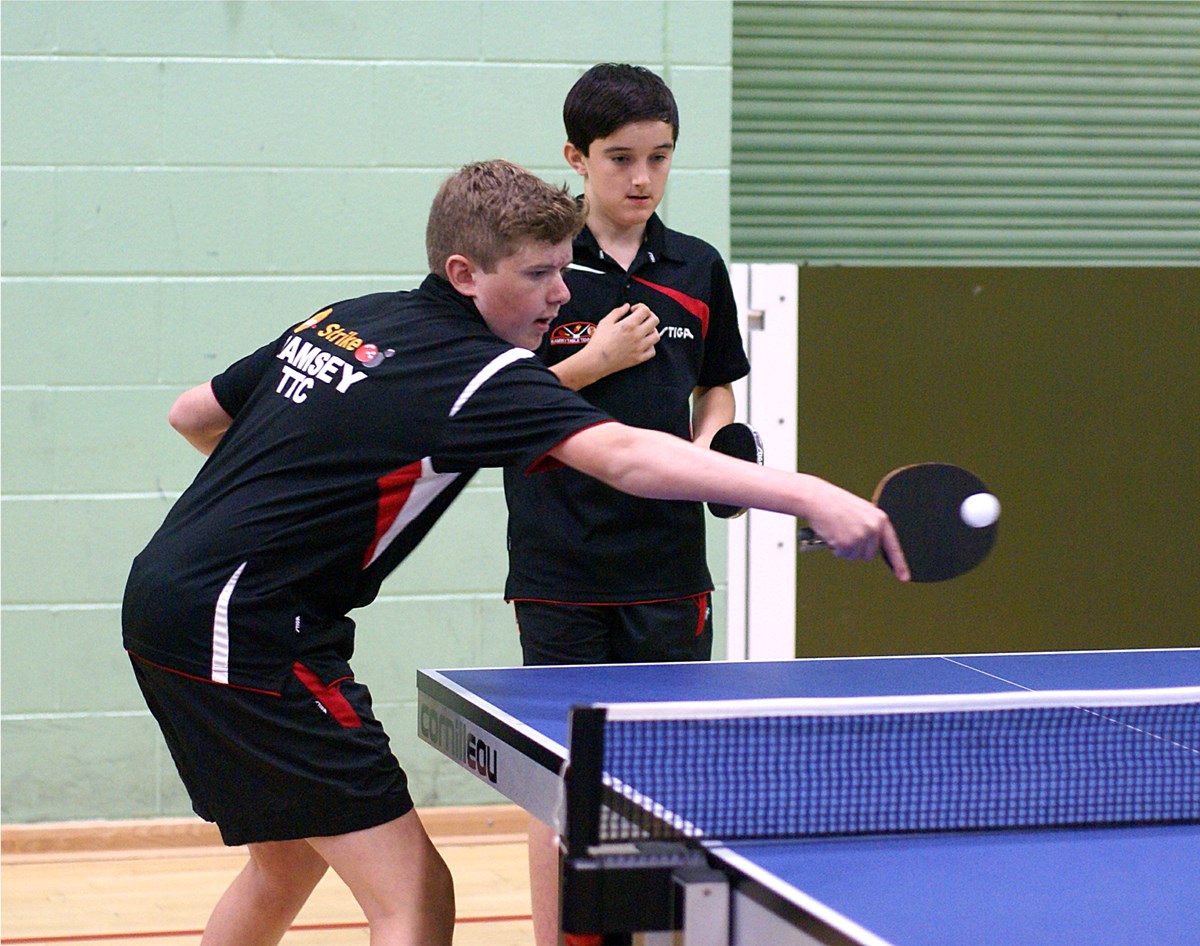 Liam Cooper and Tyler Hannay hit hat-tricks and won the doubles for fourth-placed Surestrike E. Their team-mate Leo Tomlinson added another with a win over Sophie Sheard after having lost in four sets to Libby Quaggin. But it was his near miss with Copy Shop’s coach Pat Halliwell which produced the match of the night. Halliwell ran away with the first set then Tomlinson bounced back only to lose by the narrowest of margins 1/11, 11/9, 8/11, 11/9, 9/11. Copy Shop E remain in fifth-place.