Arbory returned to the top of Division One of the DLP Adapted Bathrooms sponsored Isle of Man Table Tennis League. The current champions Copy Shop A are just one point back and Strathallan remain third some 13 points behind. Bottom placed Tower A took four points off fourth-placed Travellers A which helped them reduce the deficit to five points from fifth-placed Surestrike Ramsey A who lost 8-2 to Arbory.

In Division Two the leaders Tower B and second-placed Peel A both won by the same score so there are still five points between them. Third-placed Peel B lost to lowly Copy Shop C and with both St Ninian’s and Surestrike Ramsey C losing 10-0 it now seems exceedingly unlikely that either will escape the drop zone.

Copy Shop D fell 2-8 to top of the table Kings in the Third Division. This enabled third-placed Tower C to leap-frog above Copy Shop in their endeavour to rebound back to the Second Division after demotion last season.

Serious flood damage to the secondary hall at the NSC has caused the Isle of Man Table Tennis Association to suspend all league matches and the planned Regional Super Six competition which was due to begin on 16th December. Alternative venues are being considered and any decisions will be communicated via team secretaries, our website and Facebook pages.

Keeran Chan did well to claim the scalp of Adam Teare in four furious sets and went on to join Sam Bailey in registering a hat-trick for Arbory who capitalised on their game in hand to regain top spot. John Magnall added two vital points by beating Rhys Yardley and Wael Kassim but Teare top-spun his way past Magnall 14/12, 11/6, 11/7 for fifth-placed Surestrike Ramsey’s only success on the night.

The Greystone LLC sponsored Island Closed champion Liam Chan dropped just one set on his way to another triple for fourth-placed Travellers. His colleagues Colin Brown and Stu Douglas took a point apiece from bottom-placed Tower’s substitute Mike Chapman which secured the win. Paul Kozlowski and Graham McFarlane, the men’s over 60’s champion, did the double over Douglas and Brown.

Steve Curtis and his top of the table Tower B team-mates took just two extra sets to send seventh-placed Travellers C away without a win. Jackie Gill and Adrian Tinkler both got to the fourth set with David Parsons who was playing his debut match this season. Maurice Campbell didn’t snatch a set but probably came closest to winning a point for Travellers in losing 9/11, 11/13, 8/11 against Dario Mazzotta.

Mattie Evans, Malc Lewis and Maggie Mulhern kept second-placed Peel just five points behind Tower B with this resounding result against relegation zoned St Ninian’s. Matt Harvey almost took a set off Lewis but lost 9/11, 6/11, 10/12. Matty Kelly went one better by winning the fourth set in his encounter with Evans but new recruit Mark Harvey needs a few more matches to find his feet having not picked up a bat for at least ten years.

A Max Walker hat-trick helped ninth-placed Copy Shop C to their third win of the season. Ben Christian cast aside his recent sickness to take two points and then convert the decisive doubles with his team-mate Walker. Harry Walters, Nathan Evans and Sasha Thomas from fourth-placed Peel B all jinxed Joe Walters and, in the game of the evening, Thomas thwarted Christian’s hat-trick hopes by hanging on to win 11/9, 11/9, 8/11, 7/11, 12/10.

Juan Moore, Colin Barron and Malcolm Wenn won three, two and one point respectively for third-placed Travellers B. Copy Shop’s Rob Sim sunk Barron and Wenn who also lost to Kevin Drewry. Freya Melvin took a set off Barron and then lost on a tie-breaker 0/11, 4/11, 11/7, 13/15 for fifth-placed Copy Shop B who were also defeated in the doubles.

Matt Crabtree maintained his unbeaten record for top-placed Kings. Tom Keating and Stephen Jelly both bagged a brace for the teachers from KWC by beating Jack Christian and Kyle Dodd but they both lost to the divisional champion Zac Walker. Copy Shop D also lost the doubles and this heavy defeat meant that they have dropped four points behind Tower C in the race for the second promotion place.

Mike Chapman and Margaret Forsyth were the hat-trick heroes for promotion chasing Tower C and they delivered the doubles for good measure. Leo Doyle and Josh Dudley both beat Heather Kennett over five sets but she rallied back to disappoint Scott Horne 12/10, 11/8, 11/8.  This result meant Copy Shop F slipped back to seventh-place and Tower climbed to second-spot.

Jack Yardley hit another hat-trick for sixth-placed Surestrike D and Alex Yardley added their final point by beating Leo Tomlinson which partially made up for his 11/8, 5/11, 16/14, 7/11, 12/14 near miss against Sally Green. Tomlinson boomeranged back for the fourth-placed E team to beat Dylan Yardley who also lost to Green and Tyler Hannay. Having defeated the Yardley youngsters in the singles Green and Tyler Hannay then did it again in the doubles.

Tiernan Garvey hit his hat-trick for eighth-placed Peel C and then joined Archie Walter to take the doubles against Pat Halliwell and Sophie Sheard. Peel’s Haydn Waddington countered Cameron Dudley 11/13, 11/6, 8/11, 11/8, 13/11 and then both he and Walter consigned the free hitting Sheard to a pointless night. Kitty Thomas employed a more controlled campaign to top-spin past both Waddington and Walter who was also defeated by Dudley. Despite this result Copy Shop E stay in fifth-place.

Callan Reed, Louis Faragher and Dillon Dawson cleaned-up against their Junior Development B team colleagues but the match score obscures the tremendous effort put in by Lauren Allwright, Sam Preece and William Shooter. Only three matches were settled in three sets and four matches went to the final frame. 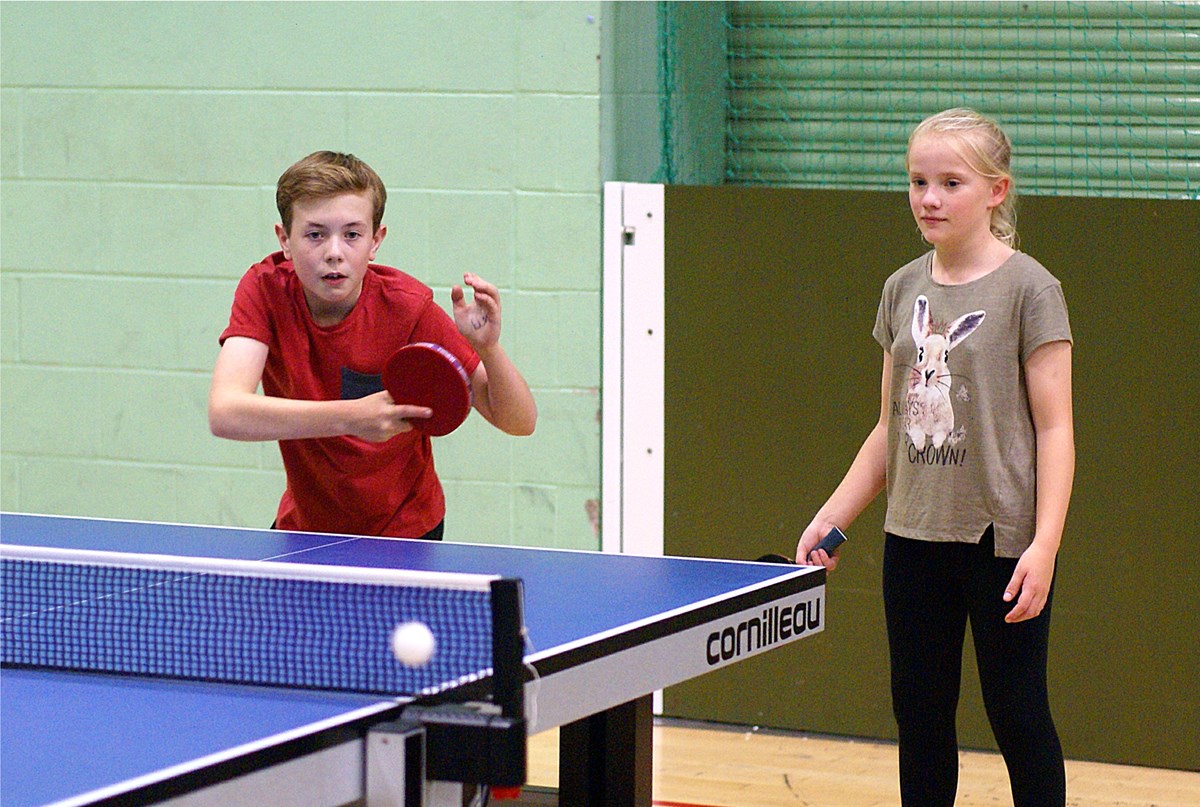