PROMOTED COPY SHOP B MAKE IT A DOUBLE CAUSE FOR CELEBRATION

Magnificent new lighting has now been installed in the secondary hall at the NSC but two teams were left in the dark as to why their opponents failed to appear in the DLP Adapted Bathrooms sponsored Isle of Man Table Tennis League this week. Despite being advised of the rearranged matches only four of the six rescheduled matches could be played. It is little consolation to the jilted teams but they were awarded the points the absence of their opposition.

Following on from the success of Copy Shop A, who won the First Division championship, their B team are now due to join them next season having clinched the runners-up spot in Division Two. Copy Shop B had been neck-and-neck with Peel A all season but eventually ended with a seven point cushion.

In Division Three the Junior Development team were equally exuberant at having registered their first win of the season. With one win and three draws this season our junior league representatives have exceeded expectation and enjoyed their introduction to senior league table tennis.

All outstanding matches will be played at the usual times next week. The Association's presentation evening will be held on Friday 8th May at Douglas Yacht Club. Contact Adam Teare on 495049 to book your places. Please also note that our Annual General Meeting will be held on Monday 18th May at the Institute of Sport at 7pm.

Third-placed Copy Shop B were two points behind Peel A who had finished their season so Rob Sim, Adam Davies and Vish Patel were able to celebrate promotion after just the first three games against already demoted Tower C.

Heather Kennett lost in straight sets but Mike Chapman tried to make it difficult for Copy Shop by taking both Sim and Patel to a fifth set only to lose 8/11 in both. Likewise, Margaret Forsyth gave Patel a scare by winning their first set. However, Chapman and Forsyth finished on a high note by winning the doubles 10/12, 11/8, 11/6, 11/9 against Sim and Patel.

and so started 0-3 down. Gary Shilling pulled it back to 3-3 with wins over Steve Curtis, Simon Radcliffe and Barry Jenkins.

The focus then fell on substitute Alex Buck who had lost heavily to Curtis and Radcliffe which made it 5-3 to Tower. Buck lost his first and third sets against Jenkins but in an exciting match, with three tie-breaks, Buck battled through 8/11, 13/11, 11/6, 10/12, 12/10 to make a draw possible. He and Shilling took their chance, pulling back from 1-2 down in sets to deliver the doubles 13/11 in the final frame.

These two mid-table teams drew when they last met so another close match was expected. The division’s top-seed Tim Baker from Surestrike racked-up his customary hat-trick to finish the season with 62 wins out of 63 games. His playing partners for the second half of the season Jack Craik and Kerenza Baker have successfully made the transition from Division Three but their win percentage reflects their inexperience of playing at this level.

Hence, Malcolm Lambert, Pedro Cardoso and George Melvin quickly made it 6-3 to Copy Shop although Craik gave more than a glimpse of his potential in taking Cardoso to a fifth set. By far the closest game was the doubles where Tim teamed-up with Craik against the youngsters from Copy Shop. Cardoso and Melvin clawed themselves back from 1-2 down in sets to secure the final point 3/11, 11/7, 9/11, 11/7, 11/9. 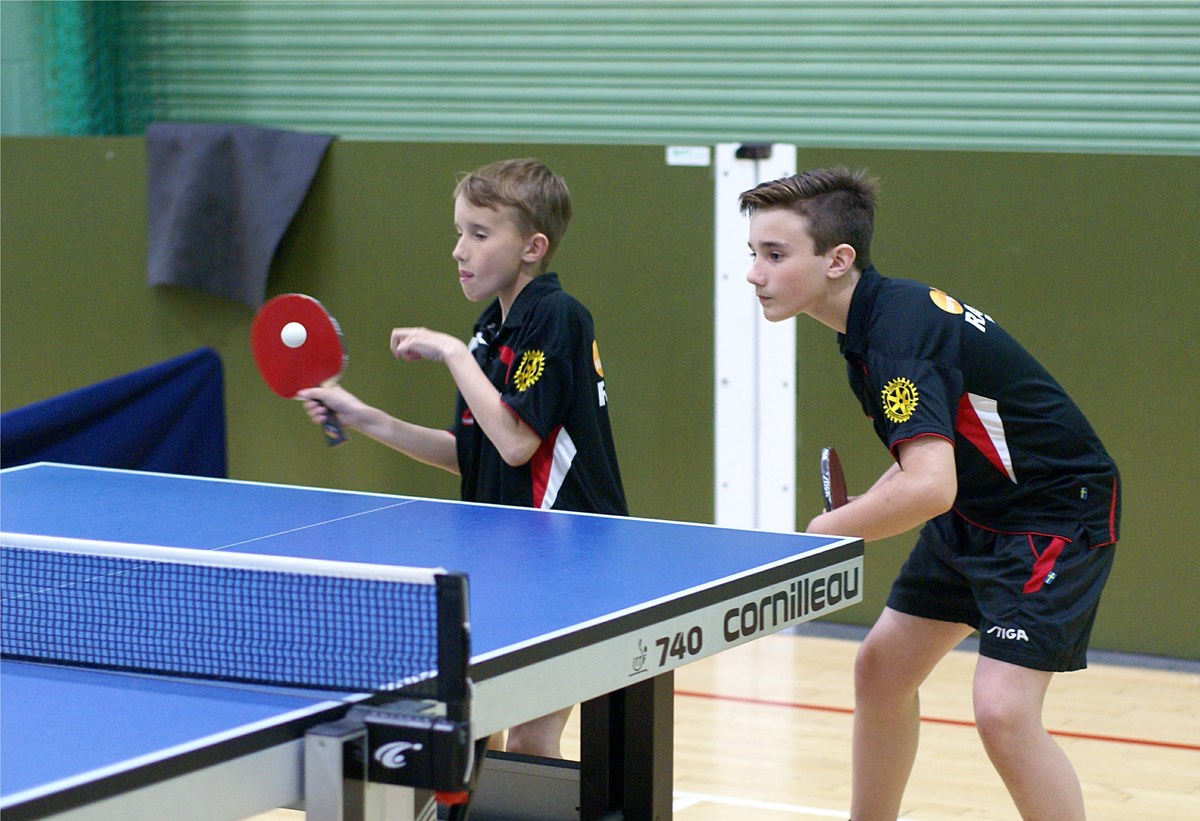 Dylan Yardley defends as his brother Alex gets ready to attack

It does not happen too often but this match featured two sets of brothers. Surestrike Ramsey had Alex and Dylan Yardley and the JD squad included Cameron and Joshua Dudley. Alex and Dylan started well with wins over Cameron and Joshua respectively but after that it was one-way traffic for JD as the Dudleys together with hat-trick hero Tiernan Garvey took the remaining singles matches against Leon Crowe and the Yardley brothers. However, the Yardleys successfully concluded the battle of the brothers with a nail-biting 12/10, 8/11, 5/11, 11/8, 11/9 win over Cameron and Joshua who never-the-less were delighted at their contribution to the Junior Development team’s first win this season. 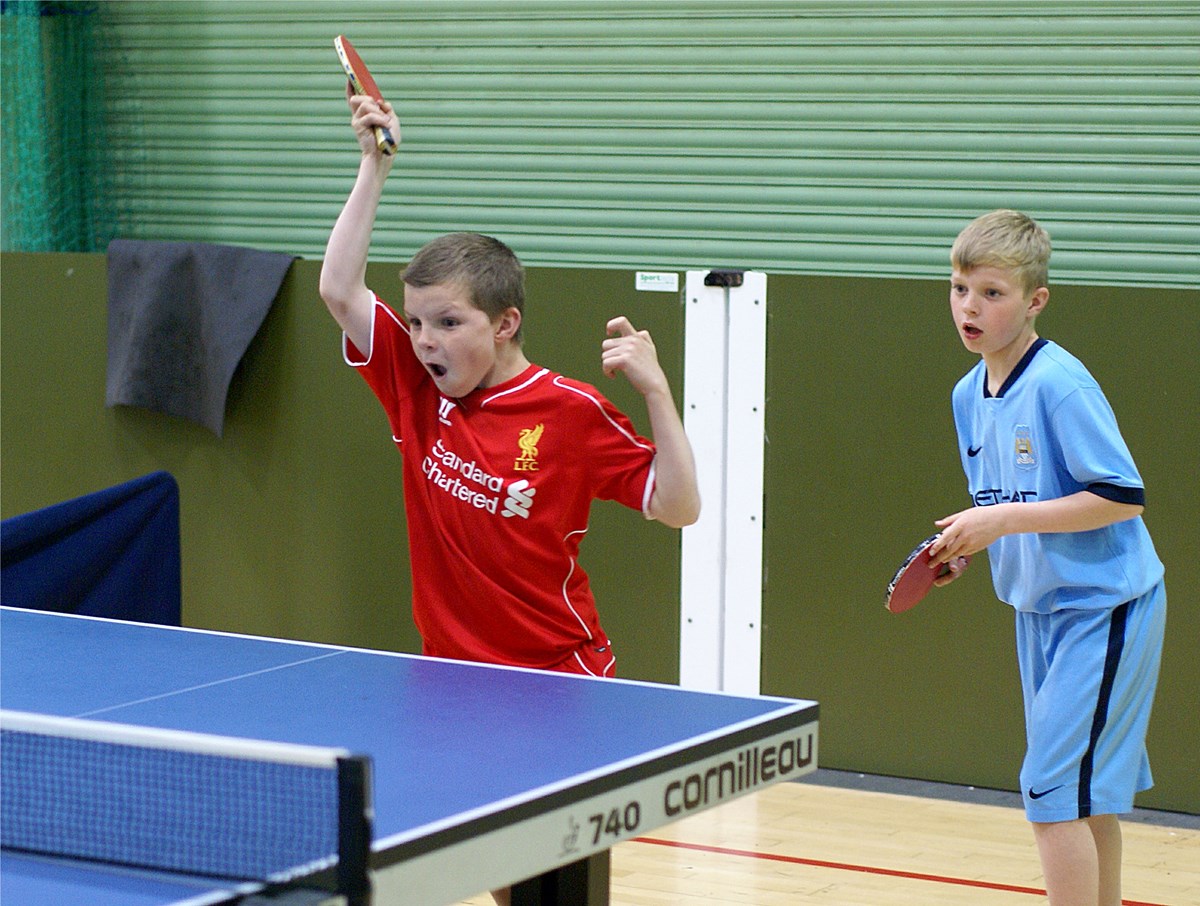 Josh Dudley cracks a winner while his brother Cameron looks on