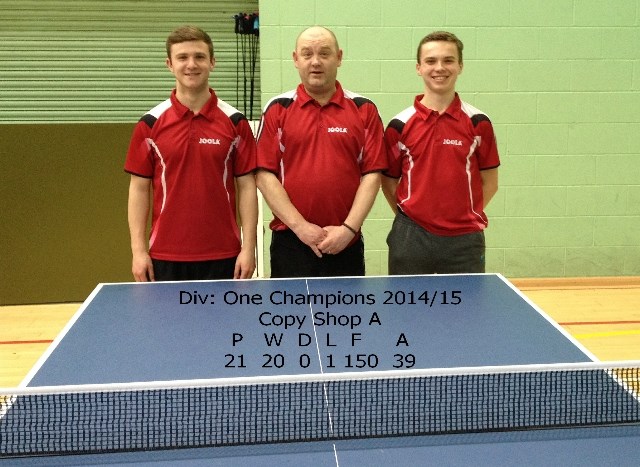 In a fitting finale to their season Copy Shop A beat their closest rivals ABC Arborists 5-4 to narrowly retain their title as the top team in the First Division of the DLP Adapted Bathrooms sponsored Isle of Man Table Tennis League. Other than their second place to Breakaway in autumn 2012 Copy Shop A have won the league every season since spring 2010. However, the outcome was far from emphatic as the Arborists still have one game to play and, with a white-wash predicted, they are likely to finish just one point behind.

The bottom three sides in Division One all lost so it is uncertain, but highly probable, that Foxdale and Zurich Spinners will both be demoted. They all have one game to play but under-manned Travellers A  have a four points cushion and will face in-form Breakaway.

Major lighting issues in the secondary hall at the NSC disrupted league fixtures on Wednesday. A restricted schedule had to be implemented and priority was given based on each match’s significance for promotion and relegation. Contractors are working at night, in the dark some might unkindly think, and have advised the NSC that the problem will not quickly be resolved. Hence, our season may have to be extended for a week or two. The revised fixtures for next week are therefore:

Strathallan A v Foxdale A (D1)

Teams need to arrive at 7:15pm when the lights will be switched on.  Matches will start at 7:30pm and must be completed by 9:30pm, at the latest, as the lights need to cool down before the contractors can resume their ruminations.

ABC Arborists needed to win this match to have a chance of snatching the title away from the holders Copy Shop A. The Arborists were nine points behind but had a game in hand and had won the last encounter. However, a hat-trick from the Divisional Champion Ronan McDonnell and two points from Top 12 title holder Sean Drewry was enough to ensure that Copy Shop remained in top spot for another season.

John Magnall and Mike Tamarov had to be content with a point apiece at the expense of Ewan Watterson whilst island champion Liam Chan took the other two points for the Arborists by beating Watterson and then Drewry 11/7, 10/12, 11/7, 11/8.

Skipper Nigel Beattie was on football duty for Laxey so left his two Zurich Spinners team-mates to try and breakout of the relegation zone. Second-to-bottom Spinners started the evening five points behind Travellers A who were playing third-placed Strathy. Hence, the Spinners had a chance to close the gap. Colin Barron and Tommy Cowin both beat Ben Christian but a 7/11, 11/9, 11/6, 3/11, 4/11 defeat for Cowin in his game with Keeran Chan was the closest that the Spinners came to wresting another point. Chan and Breakaway’s captain Paul Corran both bagged a brace to add to three walkover points but the Spinners ended the evening just three points adrift of Travellers with one game to go.

Travellers have struggled all season to find a regular third player but with Stu Douglas off golfing, his team-mate Stu Mason had to call-up Paul Mathieson-Nelson in order not to be left on his own. It was all to no avail as Strathy’s Julian Briercliffe, Hadyn McLarney and Andy Horne took all the points. Mathieson-Nelson nearly purloined a point going 2-1 up in sets before losing 6/11, 11/8, 11/5, 7/11, 6/11 to Horne. Travellers meet Breakaway next week in their last game of the season but, as the Spinners have to face second-placed Arborists, the form book favours Travellers to avoid the drop.

Bottom-placed Foxdale moved to within a point of the Spinners and four behind Travellers after a Will Bayley hat-trick against fourth-placed Tower. Neither Ken Mitchell nor Andy McLarney had any luck against Dave Parsons, Graham McFarlane or Mike Bayley. Mitchell had hauled himself back from two sets down only to lose 3/11 in his final frame with Parsons. McLarney missed-out 10/12 against Mike Bayley who also had a close encounter with his son William. Mike took the first two sets but Will was far from finished, he moved up a gear and calmly smashed his dad off the table 4/11, 7/11, 11/3, 11/5, 11/9. Foxdale meet third-placed Strathy next week in their final game, so the Foxes may well be trotting back to the Second Division.

Maurice Campbell was unavailable for the C team so three much needed points went by default to their club-mates second-to-bottom Travellers D. Juan Moore Jr has run into a rich vein of form and he confidently cracked it past Jackie Gill and Alan Harding to make it 5-0 to the D team. David Buck had to work hard for his point against Harding with one long leg decided 19/17 in his favour. In another marathon match David lost 17/15, 10/12, 7/11, 11/6, 2/11 to Gill who also beat Buck’s son Alex. Harding added the final point for the C team with a straight sets win over Buck Jr. who went rushing off to play league badminton leaving his dad and Juan Moore to deliver the doubles. Travellers D are now within nine points of Peel B but with only one game to go it may be too little too late for Travellers.

The newly crowned champions Surestrike Ramsey were without Kerenza Baker so second-placed, and undefeated, Victory Roll Saints must have been hoping for a second win over their opponents. However, a brilliant Billy Cain hat-trick and a point apiece from Frank Feeney and Matthew Emison over St Ninian’s ‘new boy’ Steve Ryder-Clague gave Surestrike the early advantage. Matt Harvey and Matty Kelly both beat Feeney and Emison and then won the doubles to ensure an honourable draw for the two promoted sides. However, Kelly’s game with Feeney could have gone either way. Feeney actually scored more points but Kelly edged it 6/11, 14/12, 12/10, 10/12, 11/9.