Copy Shop A have been the champions every season since the Spring of 2010 but no longer. A slip up against Arbory gave Travellers A the title and they still have a game in hand in Division One of the Fun 88 sponsored IOM Table Tennis League.

Tower B have the upper hand in the title race in Division Two; four points in their upcoming fixture will be enough.  Copy Shop B, Travellers C and Peel B are all at risk of the promotion/relegation play-offs but Copy Shop B have probably done enough to survive.

Jason Quirk played brilliantly to claim three points in straight sets for third placed Arbory followed by a brace from Mike Tamarov to secure the fixture. Sean Drewry, the Senior 12 title holder, lost for only the second time this season but earned a brace before a win each from Paul Corran and Adam Davies over Keeran Chan helped to reduce the deficit. Copy Shop’s seven year reign as champions came to a disappointing end.

A clean sweep for Surestrike Ramsey with hat-tricks for Adam Teare, Juan Moore and Rhys Yardley. However, there were some close calls, especially for Juan Moore who beat both Graham McFarlane and Steve Curtis 11/9 in the fifth after being two sets down in both. Rhys Yardley also prevailed 11/8 in the fifth against McFarlane. Bottom placed Tower were unfortunate to go home empty handed and will now face a play-off against the Division Two runners-up in order to determine who will be playing Division One table tennis next season.

Tommy Cowin and Colin Brown both secured two points for top placed Tower B followed by a win from Stu Douglas. A hard earned hat-trick from Dave Parsons and a win for Mike Bayley left it to the deciding doubles where Parsons and Matt Crabtree prevailed to claw the overall draw.

Tim Baker maintained his one hundred per cent win record by taking another three points for second placed Surestrike. Chris Holmes added two more before Kerenza Baker sealed the victory with a win over Peel’s substitute Callan Reed. They went one further when Tim Baker and Holmes notched up a win in the doubles. Harry Walters bagged a brace for Peel followed by a win from Nathan Evans who beat Kerenza Baker 11/8 in their fifth set.

Traveller’s top player Paul Mathieson-Nelson had a stomach bug and could not play so relegation zoned Copy Shop bagged a clean sweep thanks to hat-tricks from substitute Malcolm Lambert, Rob Sim and Kevin Drewry. Sim and Lambert also picked up a win in the doubles. This result leaves Travellers likely to be fighting for survival as bottom placed Peel B have a vital game in hand and they are only four points behind. 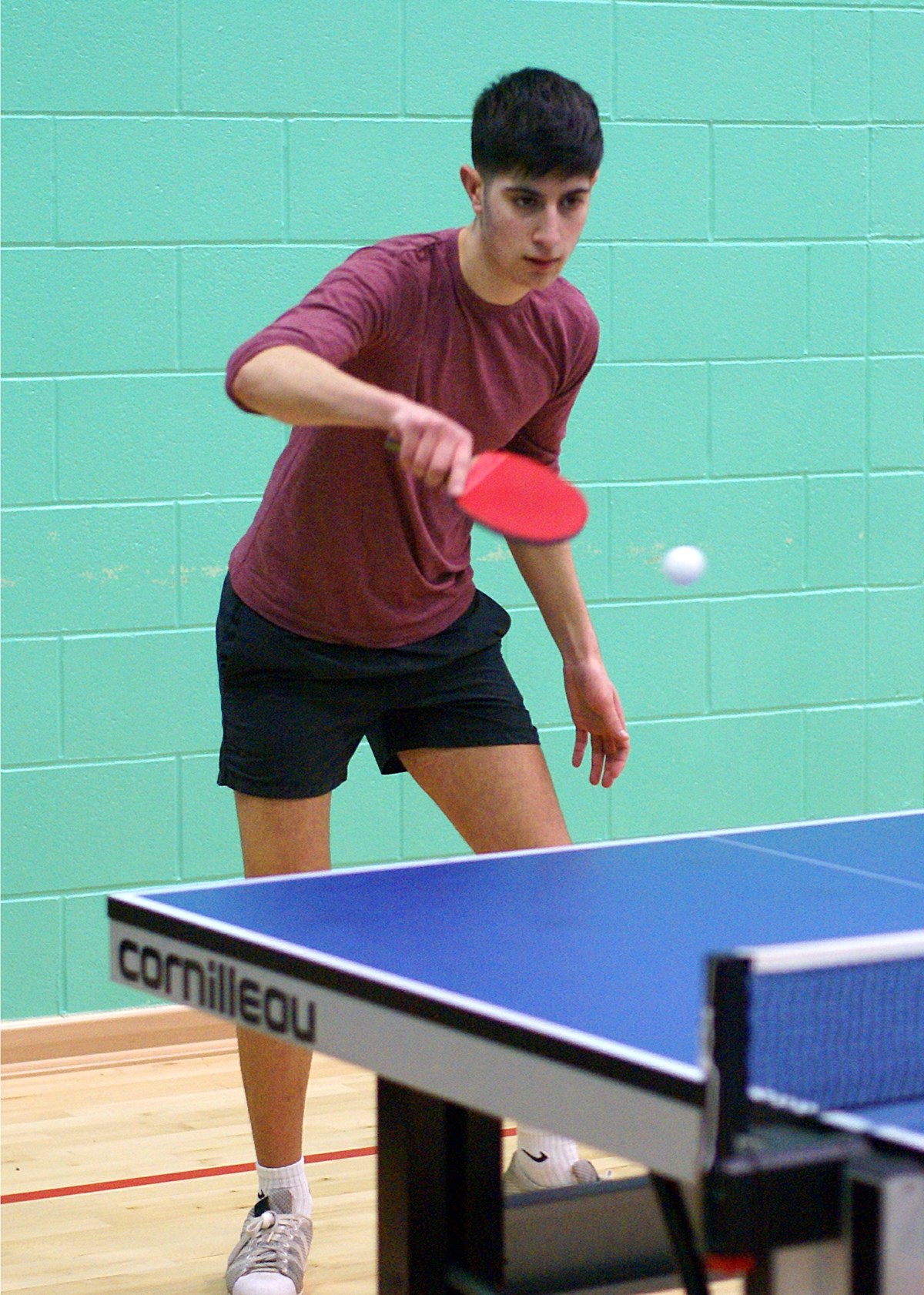 In a tight match including seven 5-setters Pedro Cardoso collected three points for fourth placed Saints followed by a brace from Matt Harvey and a win from Ken Hegarty. Maurice Campbell picked up two for second placed Travellers then a win from Alan Harding before he and Tinkler clinched the doubles 11/9 in the fifth set. However this wasn’t enough to prevent them record their second loss of the season. 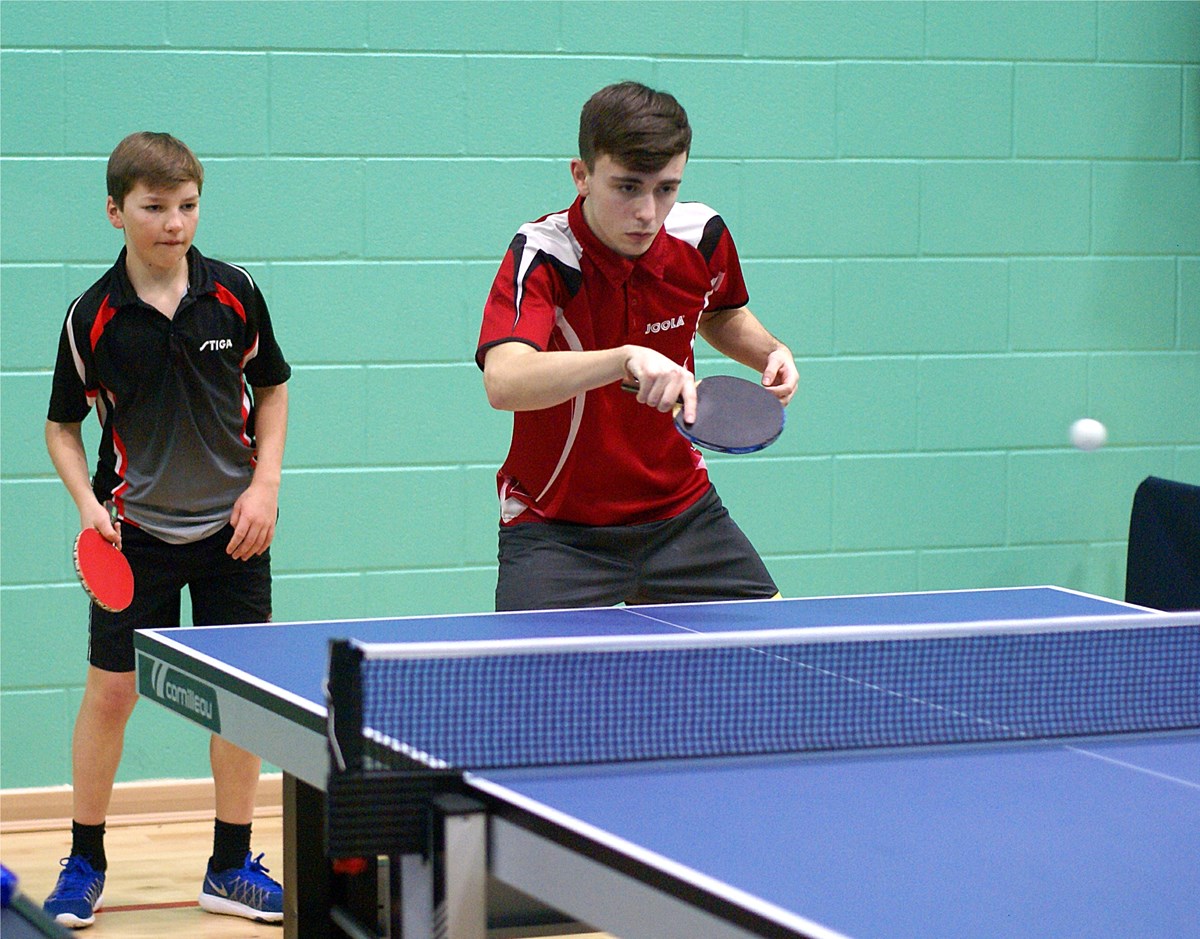 Aspden and Zac Walker also pinched the doubles 12/10 in the fifth set. 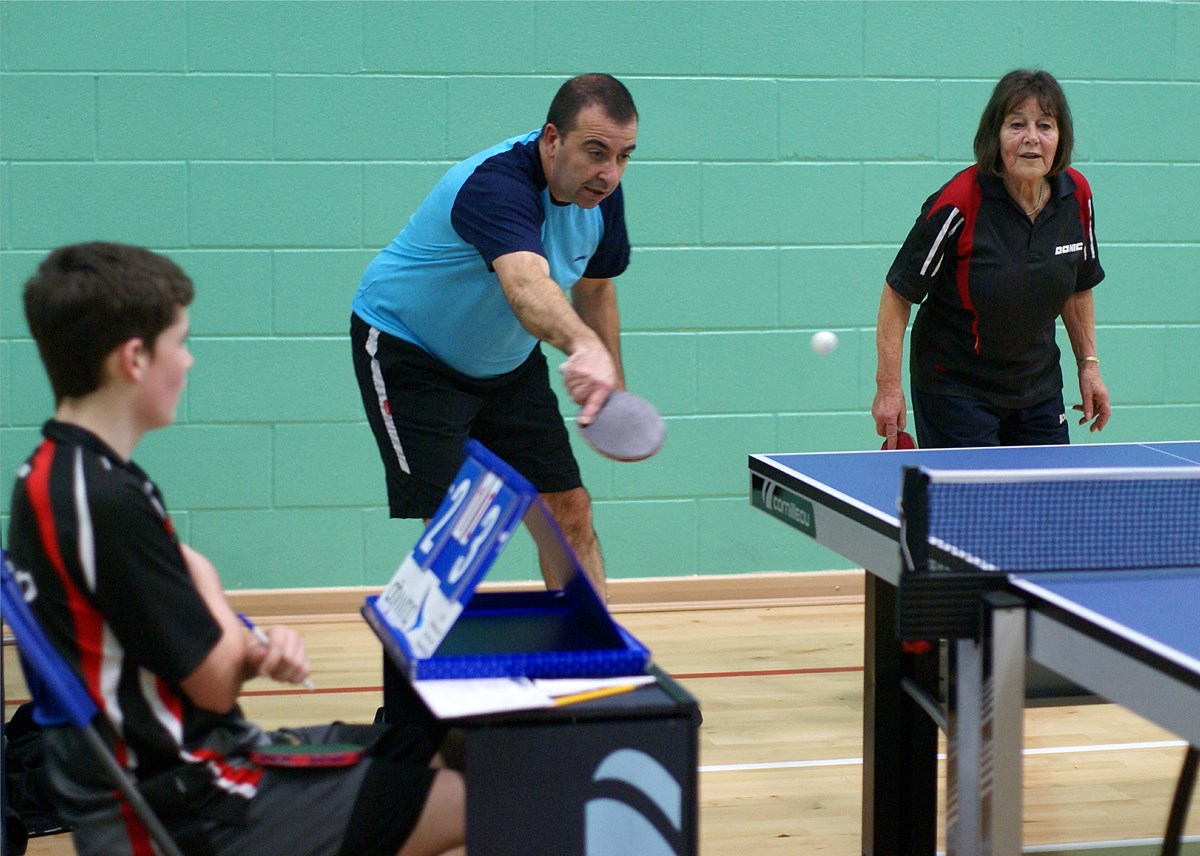 Fifth placed Tower fought back with braces from Barry Jenkins and Margaret Forsyth followed by a crucial win from Mike Chapman against Walker to earn a draw.

Nathan Walker obtained a brace along with Dave Bufton for the sixth placed X team, then a win for Sally Green ensured the draw. Former Division One player Daryl Yardley pulled it back for the bottom placed D team with a hat-trick, Alex Yardley picked up a point and finally the pair combined to bag the doubles.

Kitty Thomas claimed three points for third placed Copy Shop D followed by a point from Libby Quaggin. There were braces from Archie Walter and Luke Hegarty, and a win over Sophie Sheard from Thomas Coleman which gave St Ninian’s at least a draw. A four sets win in the doubles from Luke Hegarty and Archie Walter gave fourth placed St Ninian’s the win.

Neil Dudley bagged a hat-trick for second placed Copy Shop E, Josh Dudley added two to the collection followed by the winner from Cameron Dudley. Then they went one further when Cameron and Josh obtained the doubles. For fifth placed Surestrike Stuart Watson earned a brace along with a consolation point from Glenn Callow.

A no show from the northern team gifted bottom placed JD 1 three points which William Shooter added to by winning his remaining two matches. Charlie Callow and William Dalugdugan matched each other with braces for the sixth placed North team before taking the doubles to collect a well-earned draw.

An important full house for table topping Peel with hat-tricks from Tiernan Garvey, Callan Reed and Louis Faragher before the latter two secured the doubles. Lauren Allwright was the only player from the seventh placed team to secure a set against the now promoted side.