This year's British Primary Schools Tournament was held in Cardiff and was contested by teams from England, Ireland, Scotland Wales, Guernsey & IOM. Jersey weren’t able to send teams this year. 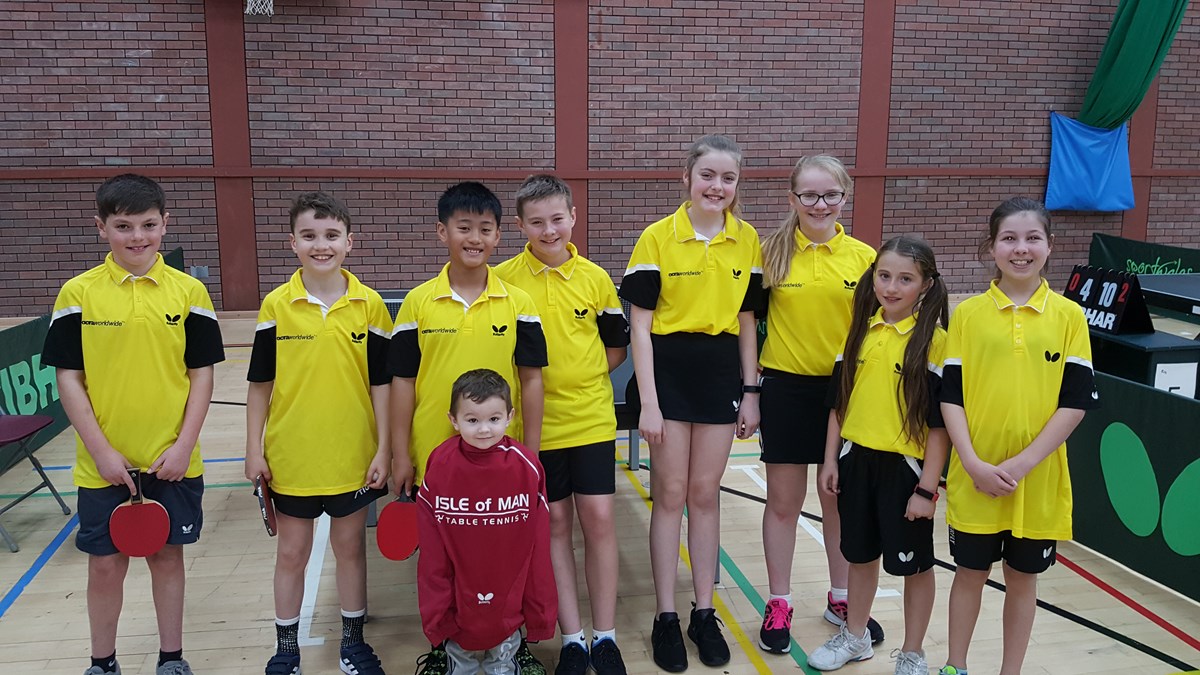 Starting in the girls hall our first match was against Wales, Sophie playing at number one this year got off to a slow start against Bethan Jones losing the first end 2/11 however overcoming her nerves she took the next 11/8 and was unlucky to lose the next two ends 9/11 13/15.

Lauren playing on the next table also lost to her opponent while Lucy and Elizabeth were both playing players from their coaching group, but unfortunately both lost in the fifth end.

Ireland were too strong for us and we lost all our matches.

England were once again too strong for us although the score of 0-10 didn’t reflect the close scores of some of the matches.

Up against Guernsey, having beaten them last year we were hoping to do so again however the final score was 3-7 to Guernsey.

The boy's team had 3 players making their Isle of Man debuts: Leo, William and Charlie.  Tiernan having played at number three last year was at number one for this tournament.

The home nation, Wales, were up first for the boys.  Tiernan got the team off to a great start by beating Evan O'Connor in three straight, 11/2, 11/9,11/9.  Against a strong Welsh side this was our only point despte some close matches especially in the doubles where Tiernan and Leo lost in four.

The team were improving and getting used to the extra pace and spin as they took on an even stronger Irish team.  Despite some good performances Ireland took all the matches.  Scotland followed quickly after the Irish where scores were very close, despite Scotland taking all matches.  Charlie levelled his match at against their number three with an excellent 11/7 win although he eventually lost in four sets.

The last two matches of the day saw us face Guernsey and England.  Although losing 8-2 to Guernsey there were some great battles.  Tiernan beat their number two player in three straight sets, William lost two matches both in four close sets playing his best table tennis of the tournament.  Our second point came in one of the doubles matches where William and Charlie won 11/9, 11/8, 15/13 in an excellent match.  England, the eventual winners of the team event was going to be a tough game.  Despite some good battles they proved too strong for us, although Tiernan and Leo did pick up an end, 14/12, in their doubles match with some very good doubles play.

Sunday, like the girls, was the individual event. Despite losing a close match against the Scottish number one (11/2, 12/10, 14/12) Charlie along with Leo and William finished bottom in their groups and played in the plate competition.  Tiernan by beating the Guernsey number two in four sets finished third in his group and had a bye to the quarter final of the plate.  Unfortunately Leo and William played each other with Leo winning that battle.  Charlie fell to the Welsh number two leaving Tiernan to fly the Manx flag.  Despite beating the Guernsey number three in straight sets he was to fall short in the semi-final in four close sets to Oscar Marriott from Wales.

Everyone improved as the matches went on and all have many positives to take forward to future competitions.  As ever they also have some points to work on and improve their play.

We must say a huge thanks to all parents, brothers and sisters for their support over the weekend.  The coaches and players really appreciate this.  Leo's dad, Joey, also ensured players and coaches were topped up with cake, drinks and food during the weekend - many thanks!  And finally to Max (Leo's 3 year old brother) for being great fun as well as the team mascot.  The team did try to get him on a table and we're sure it won’t be too long before we get a bat in his hand again.