The NSC hall two was treated to a spectacle between these two teams, both in a fight for one of the top three places. Three fifth set deciders and six tie-break sets and every player winning at least one match, there was very little to separate them. Arbory's Mike Tamarov won two games both in the fifth set, Khayee Vinas and Jason Quirk won one game each, both in the fourth set. Scott Lewis scored another hat-trick for Travellers, the testing match was against Quirk which was settled in the fifth set 9-11. Malcolm Cummings and Marc Townsend won one game each for their five points and the win.

With the exception of three games against Strathallan’s third player, this was a fairly one sided match. David Parsons kept up his winning streak for Tower and won one game in a fifth set decider 11-6. For Strathallan, the consistency and experience of Julian Briercliffe and Andrew Patterson was too much for the Tower team and both won hat-tricks without losing a set, Wayne Taylor won two games both in the fourth set.

From this derby match, team A needed to take as many points from B and distance themselves from the penultimate position in division one, but B put up a good fight and closed the gap. All of Team B’s players won two games each for their six points. Adam Teare fought hard and won a hat-trick for A, one of his matches was settled in a fifth set decider. A special mention goes out to William Dalugdugan who stepped up for A in this fixture and put up a good fight!

In this mid table battle, there were four games decided in the fourth set, three in the fifth and in one game each set played was decided in a tie-break, this was a close match. The Desmonds team played with one step-up player for this fixture who despite his best efforts was not able to convert any games into a win. It was captain Jim Travers who won two of their games and Russel Kent added the other win for their three points. Ramsey's Adrian Slater fought hard to win a hat-trick, Geoff Ball won two games and Fraser Dametto won one game, Geoff and Fraser paired up to win the doubles.

With the worst run of bad luck in Division two, Copy Shop C have yet again been unable to get close to a win despite a couple of close sets! The Tower team of Graham McFarlane, Simon Radcliffe and Dario Mazzotta were too strong on the night and Copy Shop had no answer to this whitewash. Steve Curtis and Graham paired up for the doubles win.

This whitewash of Travellers was not so easy for league leaders Peel A, with two fifth set deciders and a number of tie-break sets, it was their ability to focus and win that gave them the victory. The Peel team were Malcolm Lewis, Stuart Mason and Ken Hegarty, Malcolm and Stuart paired up for the doubles win.

Considering Travellers were not able to field a full team and conceeded three points, this was a brave effort from their team to finish with a draw. Peel's Maggie Mulhern won one game in a third set decider 14-12 and Matty Evans won one game in a fourth set decider 14-12 to add to the three conceeded points. Traveller's Nathan Evans battled hard and won a hat-trick, one of his games was decided with a fifth set tie-break 11-13. Mike Dunning won one game and Mike with Nathan won the doubles in a fifth set decider 5-11.

A very even match with strong performances all round and seven tie-break sets. Sonja Shaw won two games, Darren Shaw won one game and well done to step-up player Corbyn Schade who won one game, Darren and Sonja paired up to win the doubles for Copy Shop’s five points. For Ramsey, Martyn Howard won a hat-trick and Thomase Morris added two wins for their five points and the draw.

Punching above their weight, Peel took on the very experienced Travellers team currently sitting in second place in the league. The wily Travellers team of Alan Harding, Maurice Campbell and Jackie Gill walked through most of their games, and won two games each, Maurice and Alan paired up for the doubles win which they took in a fifth set decider 11-8. Peel’s resistance came from young William Shooter who won two games in third set tie-breaks and one game in a fifth set decider 7-11 for their three points.

League leaders Play It Forward were always going to be a serious challenge for the young Peel team and for the most part their games were won with predictable results. Brandon Montgomery and George Tsioutsioulis both won hat-tricks and Adam Braidwood won two games, Brandon and George paired up for the doubles win. The resistance and Peel’s solitary point came from the determined Ronan Thompson who won one game in a fifth set decider 6-11.

This was a close match with six games settled in the fourth set and one in the fifth, not to mention the tie-breaks! Ramsey’s Charlie and Glenn Callow and Sally Green all won two games and the callow brothers won the doubles for Ramsey’s seven points. Desmonds Douglas dug their heals in and won their three games at the hands of Neil Ronan who won two and Richard Hill who won one game.

With most of the games decided in three sets, Peel clearly had the upper hand however it was not all plain sailing on the sea of tranquility! IOM JD have an up and coming star in Ali Ramirez who does not give up and has proven himself with a 44% win rate and in this match he won their two games. For Peel, James Devereau won a hat-trick, Miltos Prixatakis and Suvi Shaw won two games each.

It was unfortunate that JD North were not able to field a full team for this fixture as between their team members there were some excellent passages of play. JD North’s Ryan Holland won their solitary game to keep them from a whitewash but also put in good performances against his other opponents, as too did Megan Lord. For Copy Shop, Pat Halliwell and Amit Lanin won two games each and Hugo Perrie won one game, Amit and Perrie paired up for the doubles win which was secured in a fifth set decider. 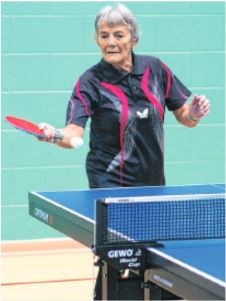