League 2019-2020 Post Lockdown Island Championships - Week 1
Island championships take place despite spring lockdown!
Deciding on the island champions is always a hard fought contest filled with passion, determination, disappointment and glory, this year’s event will be no different as the first few rounds have already thrown up some fiercely fought battles and given vey close results!

The championship has been scheduled to take place over two weeks, in the first week the events that have been decided are the ladies singles and ladies doubles, the under 14s, under 18s, over 40s and over 60s will be decided and reported in next week’s article. There will also be a full report on the men’s singles and mens doubles next week which promises to be a very interesting read.

Ladies Singles This competition was played on a round robin basis of 4 players, Island Games double bronze medalist Khayee Vinas won with up and coming junior Sonja Shaw as runner up.

Ladies Doubles This match was played  as a straight final, the winners were Khayee Vinas and Wilma Dalugdugan with Libby Quaggin and Sonja Shaw  as runners up.

Under 14s Began in two groups of five. The winner of group A was William Shooter with Amit Lanin in second place. Group B was won by Charlie Callow with newcomer Ege Niyazi coming in second place. These four players will compete in the semi-finals this Wednesday for a place in the final to be decided that week.
Under 18s There were two groups of three and two groups of four for this event. The group winners were as follows:
Group A - Cameron Dudley, group B - Charlie Callow, group C - Ronan Thompson, group D - William Shooter.
In the quarter finals to be played on Wednesday, Cameron will play Sonja Shaw, William Shooter will play Libby Quaggin, Ronan Thompson will play Wilma Dalugdugan and Glenn Callow will play brother Charlie Callow.

Over 40s  For this event, there were four groups of four players. After the initial two rounds of play, there are still two quarter finals to play. What has been decided are two places after Chris Holland beat Marc Townsend and Malcolm Cummings beat John Magnall.

Over 60s Six players qualified for the competition and were split into two groups of three. Through to the semi finals are Malc Lewis versus Steve Curtis and Malcolm Lambert versus Graham McFarlane.

Look out….  for next week’s report for a full listing of the final winners who will collect their trophies during the prize presentation evening taking place on Friday 30th October at Douglas Golf Club.

NOT FORGETTING…. two days earlier on Wednesday 28th October the IOMTTA will be hosting the infamous Fun Doubles Championship which takes place during half term week. This is a chance for players from all divisions to partner up and be in with a chance of winning a trophy. The competition always produces results from unlikely winners!

And finally…. Did you know there are three clubs on the Isle of Man that you can visit if you are interested in playing table tennis; on Monday, Ballakermeen youth table tennis club, on Tuesdays the Buchan Table tennis club and on Thursdays, Ramsey table tennis club. For more information, contact us on facebook www.facebook.com/TableTennisIOM 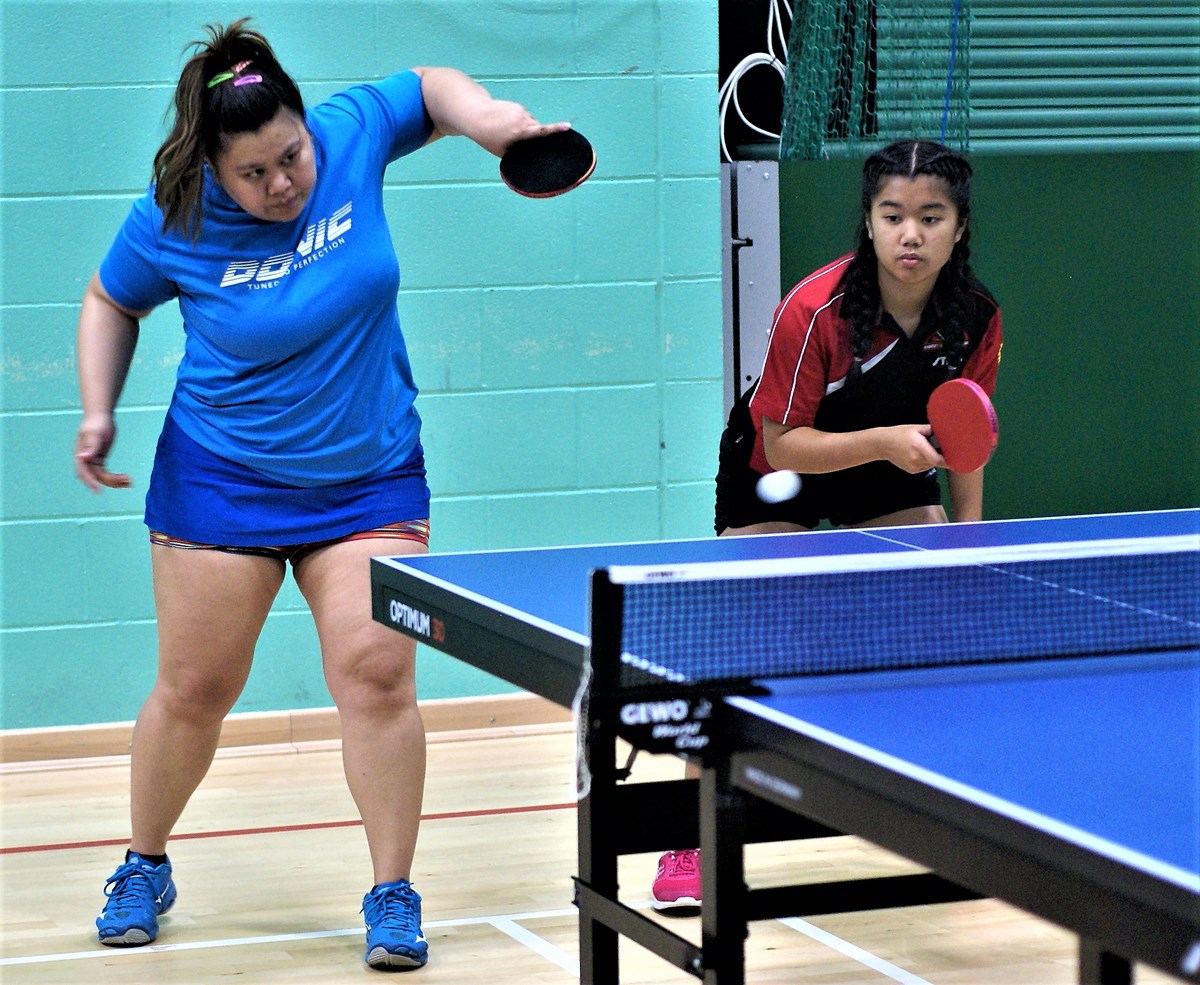 Isle of Man 2020 women's singles table tennis champion Khayee Vinas (left) together with Wilma Dalugdugan with whom she won the women's doubles title.