MATCH REPORT - LEAGUE 2020-2021 - WEEK 2
All change at the top in the Fun-88 sponsored IOM Table Tennis League.
The committee's decision to condense four divisions into three for this year, is throwing up some strong inter-team performances, with many players having to step up and play teams they would not ordinarily have faced, finding themselves challenging their opponents and even taking some sets and games! As the season unfolds, we will see more exceptional performances from these players and wish them and their teams all the best.
Division leaders after week two
Division one; 1) Ramsey A (18), 2) Arbory + Travellers A (15)
Division two;  1) Travellers B (19), 2) Desmonds Douglas A + Travellers C (18)
Division three; 1) Desmonds Douglas B 19, 2) Peel C (18), 3) Peel D + Tower C (17)
Division One
Tower B (0) Travellers A (9)

This match was not an easy walkover the scoreline suggests, with one game ending in a fifth set tie break and three fourth set deciders, Tower battled hard to resist the onslaught from the Travellers team who finished runners up in last year’s title battle. The Travellers team were Scott Lewis, Marc Townsend and Malcolm Cummings.

This match was much more than a Wednesday night game of Table Tennis, these two teams finished one and two in last year’s title battle so the big guns were rolled out, except Copy Shop were without one of their key players from last season and so played with one step-up player and one player who joined the team from division two last year. The Arbory regulars, Mike Tamarov, Jason Quirk and Khahee Vinas all won two games each, but it was the Copy Shop king pin Sean Drewry who denied all of them one game and scored a hat-trick.

Peel A (0) Ramsey A (9)
This was a strong performance from last year’s division two team Peels A, but they couldn’t prevent their whitewash by Ramsey’s A team, with two fifth set, five fourth set deciders and five tie-break sets, many sets were held in the balance and could have gone either way. The Ramsey team were Adam Teare, Chris Holland and new recruit Dr of spin, Duncan Alexander.
Tower A (4) Ramsey B (5)
This was probably the division two match of the night with three fifth set and three fourth set deciders, also no less than eight tie-break sets! Ramsey’s captain Tim Baker despatched his three opponents comfortably and won a hat-trick, Wael Kassim and Glenn Callow both won one game each for Ramsey’s five points. For Tower, William Bayley won two games, both in the fifth set, Wael Kassim and Mike Bayley both won one game each.
Ramsey C (3) Strathallan (6)
This was not a comfortable win for the Strathallan team with two fifth set and three fourth set deciders, not to mention being challenged by a much improved and very competitive William Dalugdugan who’s future we will be carefully scribed by the author of this report. Strathallan’s captain Julian Briercliffe won a hat-trick, Andrew Patterson won two and Wayne Taylor won one game for their six points. Chris Holmes won two games for Ramsey and Rhys Yardley won one game for their three points.
Division Two
Ramsey E (1) Travellers B (9)

Ramsey snatched one game from this match to save one point in what was an otherwise confident performance from the Travellers team. John Shooter and Nathan Evans both won hat-tricks and young William Shooter won two games. The doubles was won by the pairing of John and Nathan. For Ramsey, Nathan Walker won one game without losing a set.

This match was hard fought even though the scoreline may not show it, with one fifth set and three fourth set deciders, also five tie-break sets. For Copy Shop, Sasha Thomas won a comfortable hat-trick, Kevin Drewry won two games and John-Paul Banaag won one game, Kevin and Sasha paired up for the doubles win. Rob Wright won a comfortable two games for Travellers and the third came thanks to a fifth set win by Grant Paterson.

With some close tie-break games and two decided in the fourth set, there were some excellent individual performances. Jim Travers won a hat-trick for Desmonds, Tommy Cowin and Russell Kent both won two games each and Russell paired up with Jim to win the doubles. For Copy Shop, Malcolm Lambert stood firm and won two games in straight sets.

Peel B (9)  Ramsey D (1)
This was a close match despite the scoreline, with two fifth set and four fourth set deciders, Ramsey were unfortunate not to come away with more points, even though they played with two step-up players for this fixture. Stuart Perry and Matty Evans both won hat-tricks and Maggie Mulhern won two games. Matty and Stuart paired up for the doubles Win. For Ramsey, Adrian Slater dug deep and won his game without losing a set.
Copy Shop D (0) Travellers C (10)

Without one set won or one tie-break challenge, this was a comprehensive whitewash of Copy Shop by the Travellers team of Alex Buck, David Buck and Paul Mathieson-Nelson. Alex and David paired up for the doubles win.

There were glimmers of resistance to this whitewash for Ramsey with one set won in a tie-break. Apart from that, the rest of the match was dominated by the Desmonds  team of Neil Ronan, Peter Russell and Richard Hill, Peter and Neil paired up for the doubles win.

With two games decided in the fourth and one in the fifth, Copy Shop were unfortunate not to come away with more wins from this match. Ronan Thompson won a hat-trick, Sam Preece and James Devereau both won two games each and Ronan paired up with Sam for the doubles win. Resistance came from a very strong performance by Mike Levine who won two games without losing a set.

With the exception of one game which was decided in the fifth set, this was a confident walkover by the Tower team who were Mike Chapman, Margaret Forsyth and Dave Callow, the doubles was won by the pairing of Mike and Dave.

This was a close match despite the whitewash scoreline, with six games decided in the fourth set and no less than nine tie-break sets! Peel D’s team was Vlad Lannin, Bob Borland and Amit Lanin, Vlad and Bob paired up for the doubles.

For only their second match as a new team, the Ballakermeen squad are gaining strength and taking the challenge to their more experienced rivals. This match was a close affair with three games decided in the fifth, three in the fourth and no less than eight tie-break sets! Wilma Dalugdugan, Francesca Lord and Lisa Lord all won two sets each, Francesca and Wilma paired up for the doubles. For Ballakermeen, JJ Griffin won two games and Josh Maurel won one game.

For all of the latest results and league positions, visit  www.tabletennis365.com/IOM
To find out how to get involved visit  www.facebook.com/TableTennisIOM
Wayne Taylor 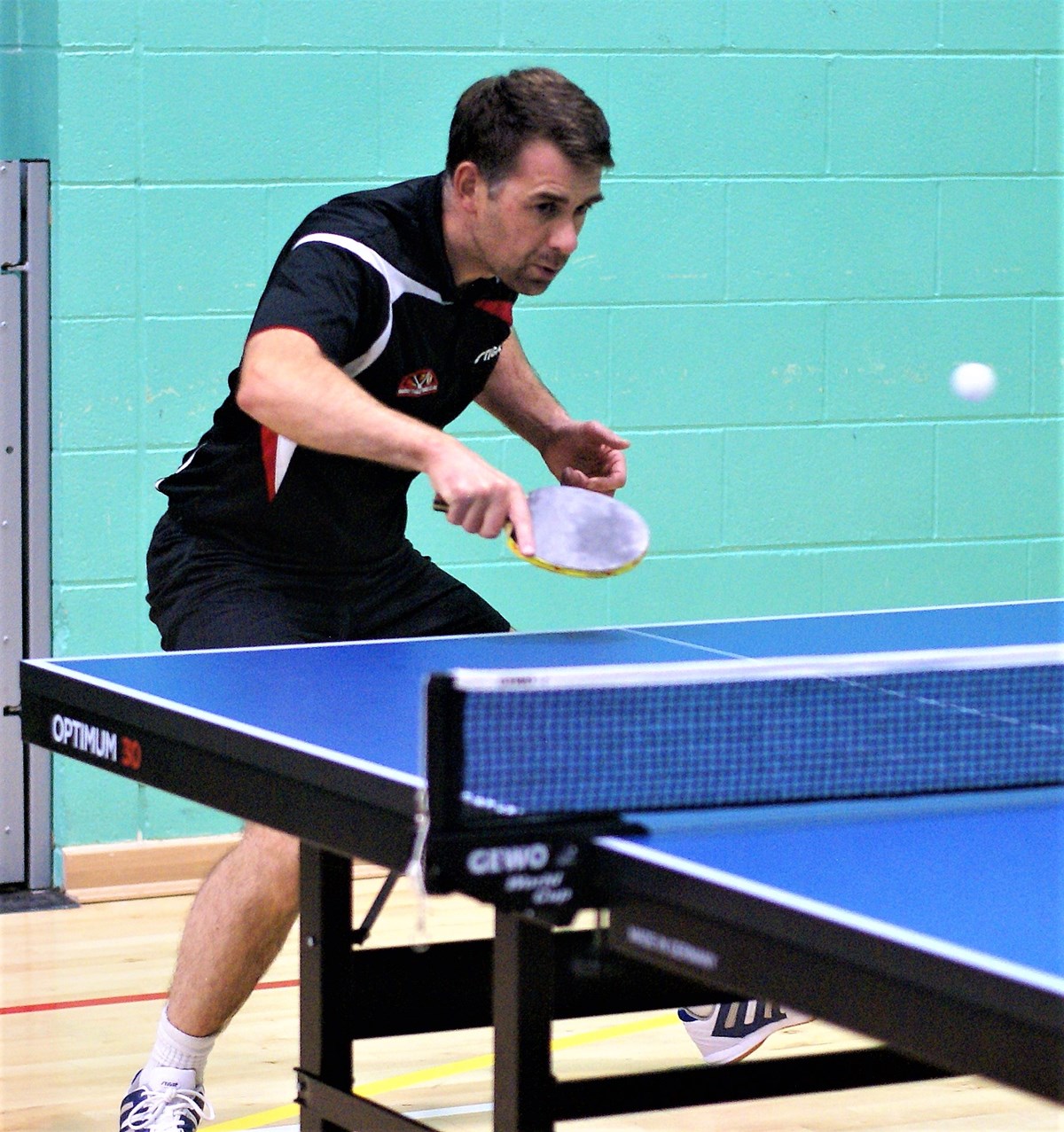 Adam ‘Trigger’ Teare from table topping Ramsey A. The team are yet to drop a game in Div: 1.