MATCH REPORT - LEAGUE 2020-2021 - WEEK 5
League leaders edge out a lead after week four in the Fun-88 sponsored IOM Table Tennis League.
GET INVOLVED Did you know that there are three Table Tennis clubs on the Isle of Man you can visit if you are interested in playing table tennis; Monday, Ballakermeen youth table tennis club; Tuesday the Buchan Table tennis club; Thursday, Ramsey youth table tennis club. For more information, contact us on facebook www.facebook.com/TableTennisIOM
Division leaders after week three
Division one 1. Ramsey A (41)  2. Travellers A (40)  3. Arbory (39)
Division two  1. Travellers B (44)  2. Desmonds Douglas A (40)  3. Travellers C (34)
Division three 1. Desmonds Douglas B (46) 2. Tower C (44) 3. Peel C (40)
Divisional report
Division One
Travellers A (9)  Tower A (0)
A strong performance from the Travellers team, with one fifth set decider and three games settled in the fourth set. It was a good fight but they simply weren't strong enough on the night to prevent their whitewash. The Travellers team were Scott Lewis, Marc Townsend and Malcolm Cummings.
Arbory (8) Strathallan (1)
For this fixture, Arbory put forward a strong defensive team with one strong attacker to ensure a convincing victory. Strathallan did not go down without a fight, with one fifth set decider and three decided in the fourth set. Defenders John Magnall and Jason Quirk both secured hat-tricks and Mike Tamarov won two games for Arbory’s eight points. Stathallan’s Julian Briercliffe won one game as a reward for their efforts on the night.
Ramsey A (8) Ramsey B (1)
In this derby match between the two top Ramsey teams, team A played with one step up player from their C team, it was a good selection as team A only lost one game from this fixture. Adam Teare and Chris Holland won hat-tricks, their step-up player Chris Holmes won two games. For Ramsey B, their solitary point towards their league total was secured by Tim Baker.
Tower B (4) Peel A (5)
Tower were very unfortunate not to come away from this fixture with more points with three of their games being settled in the fifth set against the same player, one of them settled in a tie-break! Tower’s wins included two from Dario Mazzotta and one each from Graham McFarlane and Steve Curtis. For Peel, Malcolm Lewis by the skin of his teeth, held on for a hat-trick and Stuart Mason won two games to secure their five points and the win.
Ramsey C (1) Copy Shop A (8)
A disappointing result for Ramsey, who until now have had a reasonable run of form and were unfortunate not to collect a few more points. Two games were settled in the fifth set, one of which with a tie break! In the end, Copy Shop gave very little away for Ramsey to exploit. Chris Holmes won Ramsey’s solitary game for their one point. For Copy Shop, Sean Drewry and Adam Davies won hat-tricks and Ewan Patterson won two games for their eight points and the win.
Division Two
Travellers B (8) Ramsey D (2)
With the exception of two strong games from Ramsey which were decided in the fourth and fifth sets, this was a fairly straightforward win for the Travellers team. John Shooter won a hat-trick, William shooter and Nathan Evans won two games each, Evans and J. Shooter paired up for the doubles win. For Ramsey, Adrian Slater secured their two points towards their league total.
Copy Shop B (3) Travellers C (7)
The result from this fixture could have easily been very different, with four games settled in the fifth set, three games settled in the fourth set, and no less than eleven tie-break sets, this match was a nail-biter. Kevin Drewry won two games and step-up player Libby Quaggin won one game for Copy Shop’s three points. For Travellers, Paul Mathieson-Nelson won a hat-trick, David Buck won two games and Vishal Patel won one game, Mathieson-Nelson and Buck paired up for the doubles win which was settled in the fifth set!
Peel B (2) Desmonds Douglas A (8)
A dominant performance from the Desmonds team. Three games were settled in the fifth set and only one in the fourth, Peel were unlucky to secure more wins but their adversaries were just too strong on the night. Stuart Perry won two games towards Peel’s running league total. For Travellers, Jim Travers secured a hat-trick, Russell Kent and Tommy Cowin won two games each and Kent with Travers paired up for the doubles win.
Ramsey E (1)Copy Shop C (9)
A strong performance and convincing win for the Copy Shop team, Ramsey were unfortunate not to pick up more points, with two of the games settled in the fifth set and one in a tie-break! Preserving Ramsey’s honour, Nathan Walker won one game in straight sets. The remaining games were won by Copy Shop with hat-tricks from Malcolm Lambert and Sonja Shaw, Leo Doyle won two games and Shaw with Lambert paired up for the doubles win.
Copy Shop D (0) Travellers D (0)
This match was postponed and will be played at a later date.
Division Three
Desmonds Douglas B (9)  Ramsey G (1)

With some close fought games, Ramsey were unlucky not to take more from this fixture, with two fifth set deciders, two fourth set deciders and six tie-break sets, some games could have gone either way. For Desmonds, Neil Ronan and Richard Hill both secured hat-tricks, Peter Russell won two games and Ronan paired up with Russell for the doubles win. It was Thomase Morris who dug deep to win Ramsay's solitary game in a fifth set tie-break 11/13.

Peel C (7) Ramsey F (2)
With thirteen tie-break sets, two fifth set deciders and four fourth set deciders, this match was a struggle for the Peel team to convincingly win. Peel's Ronan Thompson and Sam Preece both won hat tricks, Thompson paired up with James Devereau to win the doubles. For Peel, Francesca Lord, Lisa Lord and Wilma Dalugdugan won one game each for their three points.
Tower C (9)  Peel D (1)
In a very close fought match between a very experienced team and a relatively inexperienced team, there was a lot for Peel to take as positives from this match. With three games decided in the fifth set, play was very close. For Tower, Mike Chapman and Barry Jenkins both secured hat-tricks, Margaret Forsyth won two games and Forsyth paired up with Jenkins for the doubles win. To save Peel's honour, Amit Lannin dug deep to win one game in the fourth set for their one solitary point.
Ballakermeen (4) Copy Shop E (6)
With some very strong individual performances, the team from Ballakermeen are going from strength to strength. The experience of the Copy Shop team helped them to stand firm but were challenged, with two games settled in five sets and two games in four sets. For Ballakermeen, Ege Niyazi and JJ Griffin both won two games each for their four points. For Copy Shop, Mike Levine secured a hat-trick, Daniel Levine and Jake Saulnier won one game each and Levine with Levine paired up for the doubles win.
For all of the latest results and league positions, visit  www.tabletennis365.com/IOM 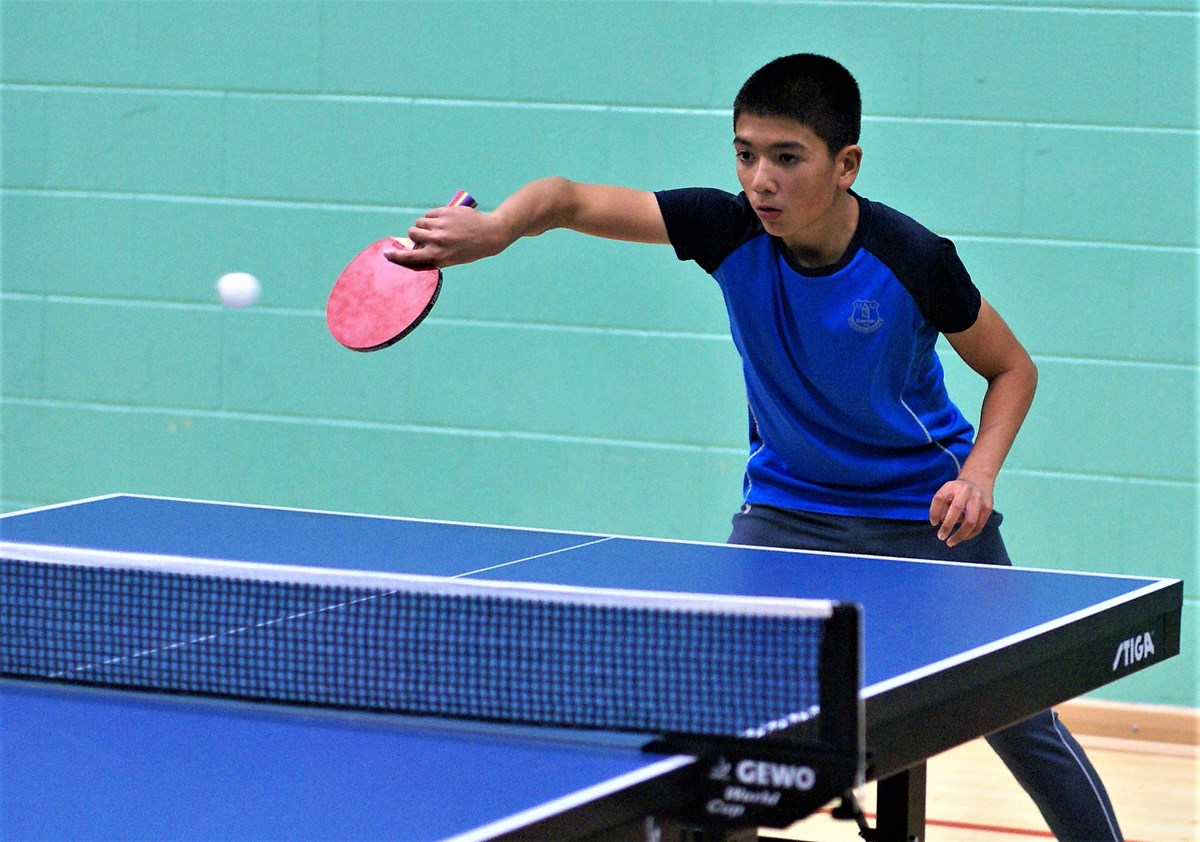