Arbory were unable to field a full team for this fixture, also Copy Shop played with one step up player, Sonja Shaw who gained invaluable experience in this top of the table match. Sean Drewry won two games, in one of the games, he struggled against defender Jason Quirk who after a fourth set tie-break levelled the score at 2-2. In the final set Sean finally won 11-7 for Copy Shop’s two wins added to the three conceded games. The remaining games were won by Khayee Vinas and Jason Quirk who won two each. In Jason’s second game it was another fifth set decider only this time he won with a tie-break 10-12.

With the exception of two games featuring David Parsons, the results from this match were all three set wins for the Travellers team. Scott Lewis and Malcolm Cummings won hat-tricks and Marc Townsend won two games. David Parsons kept Travellers honest and won one game, adding one more point for the Tower team and avoided a whitewash.

Fighting for mid-table dominance, Strathallan needed to harvest as many points as possible from this fixture, but the Ramsey team were in a battle of their own, to stay as far away from the relegation zone as possible. With one step up player in the ranks, their performance was exemplary. Andrew Patterson won two close games for Strathallan, Julian Briercliffe and Neil Quane won one game each for their four points. Ramsey’s Chris Holland was the only player to score a hat-trick from this fixture and Chris Holmes won two games, both players took one of their games to fifth set deciders to take the win and the five valuable points.

The B team began this derby fixture with a one player forfeit leaving them with an uphill struggle to win the match, which they managed with relative ease over their lower placed rivals. For their C team, Vishal Patel executed one of his games with ruthless precision and won without losing a set. The remaining games were won by the remaining members of the B team, Mike Dunning won a hat-trick and Nathan Evans won two games, they also partnered up for the doubles win to make up their six points and the win.

Another disappointing week for the Copy Shop team, despite some excellent passages of play with five games settled in the fourth set and one in the fifth, it was unfortunate they couldn’t capitalise on their efforts and avoid a whitewash at the hands of league leaders Peel A. The peel team were Malcolm Lewis, Ken Hegarty and Stuart Mason, Stuart and Ken paired up for the doubles.

With five tie-break sets and three fifth set deciders, this was not an easy fixture for either team in this mid table battle. For Peel, Stuart Perry won two games and Matty Evans won one game for their three points. The remaining games were won by Desmonds with a John Callow hat-trick, Russel Kent won two games won by Russel Kent and step-up player Neil Ronan won one game. The double was won by the Desmond’s partnership of Russell and John.

With four games decided in the fourth set and four tie-break sets, the teams at both ends of the third division fought hard for their points. Ronan Thompson won two games for Peel and Vlad Lanin won one game. For Ramsey, Glenn Callow won a hat-trick, Charlie Callow won two games and Sally Green won one game. Glenn and Charlie paired up to win the doubles in three straight sets.

In an interesting strategic move, the B team let one of their players step up to the A team which left them short of one player, forfeiting three games before a ball was served. There was just one game that was settled in a fifth set decider, the rest were won in three sets and resulted in a whitewash of the B team’s whitewash. The A team for this derby match were Brandon Montgomery, George Tsioutsioulis and step-up player Jonathan Broad, Brandon and George paired up for the doubles win.

In a closely contested match, there were two fifth set deciders, five fourth set deciders and four tie-breaks. Young William Shooter fought well and won a hat-trick, Lauren Allwright won Peels other game in a fifth set decider 11-3. The remaining games were won by Tower, Mike Chapman and Barry Jenkins won two gams each and Margaret Forsyth won one game, Mike and Barry paired up for the doubles win.

The result of this match was expected given the position of the teams at both ends on the league table, but maybe not a whitewash! Ramsey reached no less than five tie-break sets but were unable to convert any of them to score a point. The travellers team were Alan Harding, Rob Wright and Jackie Gill, Alan and Rob paired up for the doubles win.

These teams are next to each other in the league fighting for position and are very equally matched, so much so that two games were settled in the fifth set, five in the fourth and there were five tie-break sets, the highest scoring of which was 17-15! Ramsey’s top scorer William Dalugdugan won two games, Frank Feeney and Matthew Bell won one game each and William with Matthew paired up for the doubles win. Sonja Shaw won a hat-trick, one of the games decided in a fifth set tie-break 10-12. John Paul Banaag won two games, both in three straight sets.

With the exception of two games in which JD North won a set, this was a dominating performance from the league leaders Copy Shop E, resulting in the Whitewash of the JD side. Copy Shop’s team were Jake and Daniel Levine with Corbyn Schade, Daniel with Corbyn paired up for the doubles win.

In this mid table fixture, Copy Shop were lucky to capitalise on a one player forfeit from Ramsey, which gave them three points before the match began. Amit Lanin was the only player from Copy Shop who won one game to add to their gifted three points. Lisa Lord won a hat-trick and only lost one set to Amit, Francesca Lord won two games, one of them decided in a fifth set tie-break 14-16. Lisa and Francesca paired up to win the doubles in a four set game. 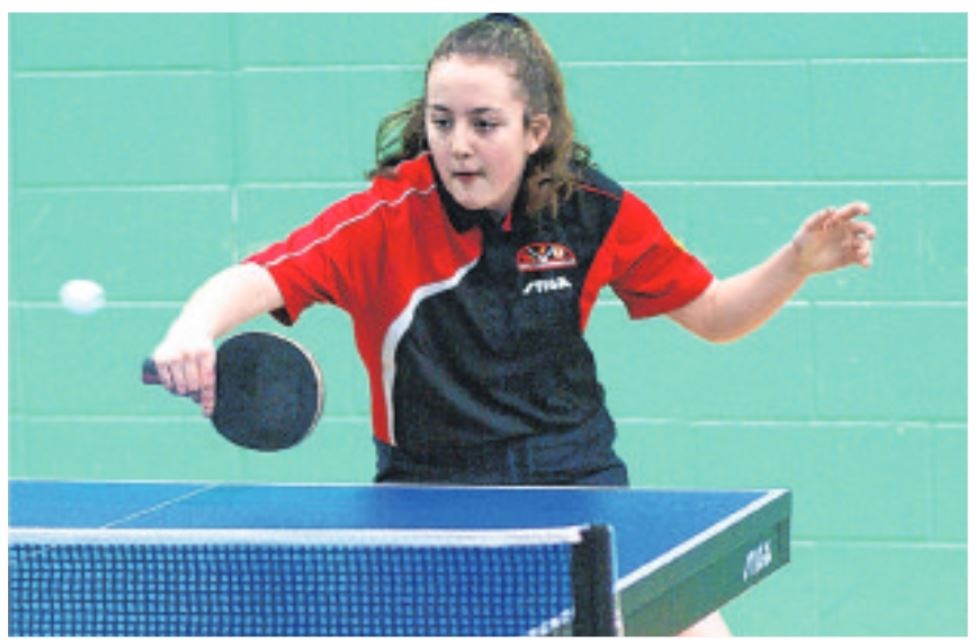