Arbory gave very little away in this whitewash of Tower, with just three sets conceded by the victors, this was a decisive victory in their campaign for the D1 title. The Arbory team were Mike Tamarov, Khayee Vinas and Jason Quirk.

The Ramsey team were weakened for this fixture and played with one step up player Fraser Dametto, who punched well above his weight to win one game in a fifth set decider for an extra valuable point. His team mates Chris Holmes and Chris Holland also won one game each for their three points. Copy Shop’s Sean Drewry and Paul Corran both won hat-tricks without losing a set for their six points and the win.

The Ramsey team played with one step-up player for this fixture who was able to salvage one extra point towards their campaign to distance themselves from their B team.The result could have been very different with five games settled in the fifth set and two of them decided with a tie-break! Adam Teare won a hat-trick, all in five sets and a rather busy step-up player Chris Holland won one game in another fifth set decider. For Travellers, Scott Lewis and Liam Chan won two games each and Marc Townsend won one game.

The result of this closely matched fixture could have been different with two fifth set deciders and five tie-break sets. Copy Shop won all of their games in three sets, Ewan Watterson won two games, Malcolm Lambert won one game and they also partnered up fo the doubles win for their four points. Mike Dunning won a hat-trick for Travellers, Paul Mathieson-Nelson won two games and Nathan Evans won one game for their six points and the win.

In this top of the table fixture, Tower needed to dominate this match to be in with a chance of taking the D2 title away from the clutches of Peel, but despite a spirited performance, they just couldn’t convert enough games into wins. Dario Mazzotta won two games, Simon Radcliffe and Steve Curtis won one game each. Peel’s Malcolm Lewis won a hat-trick and Stuart Mason won two games, Malcolm and Stuart paired up for the doubles which was decided in the fifth set.

Ramsey were just one tie-break set away from a clean sweep in this fixture but Travellers’s David Buck saved them and won one game in the fifth set 14-12. Travellers were unlucky not to win any more games with a further two games settled in the fifth set but the Ramsey team were too strong. Geoff Ball and Adrian Slater both won hat-tricks for Ramsey, Dave Bufton won two games and Dave with Adrian paired up for the doubles win.

And from nowhere, Copy Shop claim their first resounding win of the season! Copy shop used one step-up player and Desmonds Douglas used two, never the less this is a solid base from which to take stock and move forward. Libby Quaggin, Leo Doyle and step-up player Mike Levine all won two games each. For Desmonds, Russell Kent won a hat-trick and he paired up with step-up player Neil Ronan to claim the doubles win.

The appearance of the scoreline doesn’t reflect the effort put into this fixture from both teams, with three fifth set deciders, four fourth set deciders and seven tie-break sets, the games were close! Lauren Allwright and step-up player Ronan Thompson won one game each for Peel's two points. Glenn and Charlie Callow both won hat-tricks and paired up for the doubles win, Sally Green won one game for Ramsey’s eight points and the win.

This was a dominant performance from league leaders Play It Forward A, even with one step-up player in their ranks! The closest Ramsey managed to get to prevent this whitewash was almost winning one set in a tie-break to keep the game going, but even this was not possible. The Play It Forward team were Brandon Montgomery, George Tsioutsioulis and step up player Jonathan Broad, Brandon and George paired up for the doubles win.

In this mid-table battle, Ramsey needed to reap as many points as they could to distance themselves from Tower but with four fourth set deciders, one fifth set decider and six tie-break sets, the Tower team stood strong. William Dalugdugan won a hat-trick and Frank Feeney won one game for Ramsey’s four points. For Tower, Mike Chapman and Barry Jenkins won two games each, Margaret Forsyth won one game, Mike and Barry paired up for the doubles win.

Despite some close passages of play with seven tie-break sets, three fourth set and one fifth set deciders, the Copy Shop team could not do enough to extract any more wins from this fixture, their Solitary win came from Sonja Shaw. The remaining games were won by Travellers, Jackie Gill and Maurice Campbell won hat-tricks, Alan Harding won two games and Maurice paired up with Jackie for the doubles win.

Only one player from the Play It Forward team turned up for this fixture to save as many of the three points available for his team, despite one fifth set decider and two tie break sets, Rob Mercer was only able to win one game for his team and keep them from a whitewash. For Desmonds Douglas, Peter Russell and Richard Hill won one game each.

In the battle for second place in the league, there were four fifth set deciders, three fourth set deciders and eight tie-break sets. These top of the table teams showed determination to win with some outstanding individual performances. For Ramsey, Wilma Dalugdugan won two games and team mate Francesca Lord won one game. Peel’s James Devereau won a hat-trick Miltos Proxatakis won two games and Suvi Shaw won one game. Suvi and Miltos paired up to win the doubles which was settled with a fifth set tie-break 10-12.

With the exception of just three games where Ali Ramirez was able to influence the score and put up some resistance, this was pretty much a one sided match. Ali won one game for IOM JD, the remaining games were won by the Copy Shop team. Amit Lanin and Hugo Perrie won hat-tricks, Ben Arthur won two games and the doubles was won by the pairing of Amit and Hugo. 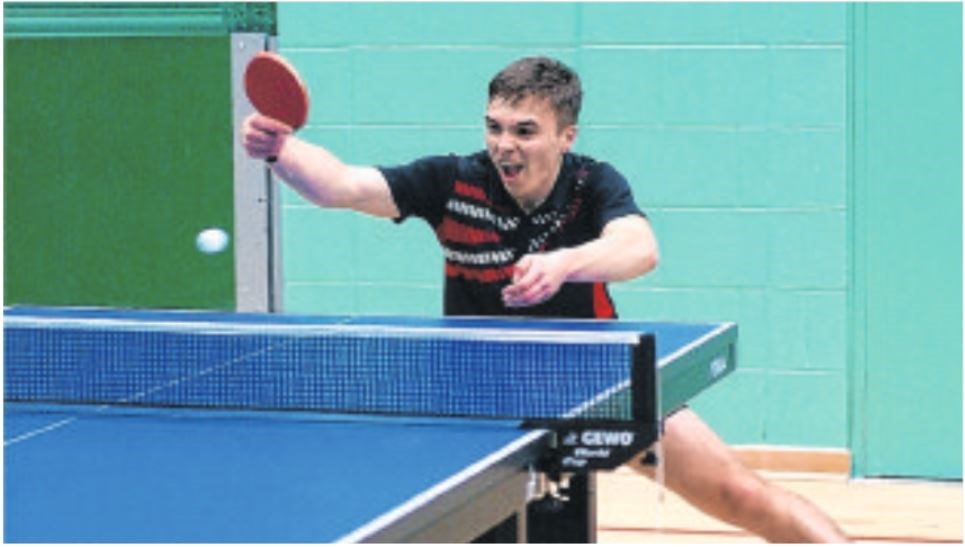