Only one player left with 100% win record in the Fun-88 sponsored IOM Table Tennis League.

Considering the polar opposite league positions of these teams, there were some outstanding passages of play making Travellers work hard for their win. Mike Bailey was the only player to win one game for Tower’s solitary point but there was almost a second from a fifth set decider, which was eventually won by Traveller’s Malcolm Cummings. For Travellers, Scott Lewis and Marc Townsend comfortably won hat-tricks and Malcolm Cummings won two games.

Strathallan were unfortunate not to collect an extra point in this fixture but the experience and well practiced Arbory team were too strong on the night and deserved their win. Captain Julian Briercliffe won a hat-trick in three, four and five set games for Strathallan’s three points. For Arbory, Mike Tamarov, Jason Quirk and Khayee Vinas won two games each for their six points and the win.

With a one player forfeit from both Ramsey teams, one valuable point was off the table and with just three points separating them it was all to play for. Ramsey A’s captain Adam Teare confidently won two games for his team to finish the night with a collective four points. It was for B to limit the damage in the other two games, Captain Tim Baker won one game in a fourth set tie-break 10-12 and Chris Holland took his opponent to a fourth set to win one game for his team, the final score was a draw and a division stalemate.

In this thrilling top table fixture, only three points separated the teams so it promised to be a hard fought match and they didn’t disappoint! With three fifth set deciders and four fourth set deciders, the final result was probably a fair one. Mike Dunning won a hat-trick for Travellers in a mixed set of games and Paul Mathieson-Nelson won two games for their five points. The Tower team drew on the experienced Graham McFarlane to win two games, Simon Radcliffe and Dario Mazzotta won one game each and Graham with Simon paired up for the doubles win and the draw.

In this fixture for position these teams, separated by one game in hand, were out for every set they could win. With three games decided in the fifth set three in the fourth set with five tie-break sets, the scores were close. John Callow scored a hat-trick for Desmonds Douglas and Jim Travers won two games, Russell Kent paired up with Jim for the doubles win and their six points. For Copy Shop, Ewan Watterson won two games, Malcolm Lambert and Rob Sim won one game each.

This was a tough fixture for the Copy Shop team, with two recent additions to the Ramsey squad who formerly played the game at a high level both across and on the island, the team fought hard with one fifth set tie-break decider, five fourth set deciders and no less than ten tie-breaks, Copy Shop can be proud of their performance. Ramsey’s Geoff Ball and Adrian Slater won hat-tricks and also paired up for the doubles win, Fraser Dametto won two games. For Copy Shop, their solitary point was gained by Cameron Dudley in a fourth set tie-break 10-12.

Peel were gifted three points in this fixture from a Travellers one player forfeit and also played two games with a step-up player. Peel’s Stuart Perry won two games, Maggie Mulhern and Matty Evans won one game each against the Travellers step-up player and also paired up for the doubles win.  David Buck fought well to defend Traveller’s honour and won two games, one of them in a fourth set tie-break 13-15.

In this mid-table fixture, one game in hand and a tail wind separates these teams, so every set won matters as the season draws too a close. With five fourth set deciders, there were some close games. For Tower, Barry Jenkins won two games, Mike Chapman and Margaret Forsyth won one game each and Mike paired up with Barry for the doubles win. John Paul Banaag won a hat trick for Copy Shop, each in the fourth set and Sonja Shaw won two games for their five points.

In a surprise result and upset, the mid-table Ramsey E team suffered their second whitewash of the season by the same team, even though they played with one step-up player! The Ramsey team did fight hard with two games settled in the fifth set and three in the fourth, but they just couldn’t capitalise on their efforts. The league leading Play It Forward team were George Tsioutsioulis, Adam Braidwood with a 100% win record and step-up player Jonathan Broad, George and Jonathan paired up for the doubles win.

Despite some spirited passages of play from the F team with seven tie-break sets, three fourth set and one fifth set deciders, they suffered a whitewash from the D team who are fixed on fighting for a medal position in their division. The D team were Glenn and Charlie Callow, Sally Green and the doubles was won by the Callow pairing.

With only two games settled in three sets, there were some strong performances from both teams in this fixture. Peter Russell and Jo Healey won two games each and Richard Hill won one game for the five Desmonds Douglas points. Young William Shooter scored a hat-trick and Sam Preece won one game, the doubles was won by the William and Sam pairing.

A convincing win for the Peel team who with the exception of one game, dominated this match. Ronan Thompson and Vlad Lannin won hat-tricks, Claude Butler won two games and Claude with Vlad paired up for the doubles win. The only game won by the Play It Forward team was from a Rob Mercer tie break in the third set 10-12.

In a close fought derby match with three fifth set deciders, players from both teams played some exceptional table tennis. Corbyn Schade won a hat-trick for E, Jake Levine won two and Daniel Levine won one game, Jake and Corbyn paired up for the doubles win. A resilient Amit Lanin won two games for Copy Shop with the third game won in a fifth set decider by Hugo Perrie.

There were some close games in this fixture between the development teams and a fair scoreline to reflect their efforts. Ali Ramirez won two games for IOM JD and James Arthur won one game, they also paired up for the doubles which was won in a fifth set decider. It has been on the cards for a while and finally Ryan Holland won his first hat-trick in straight sets, Faye Coulter won two games and Megan Lord won one game. 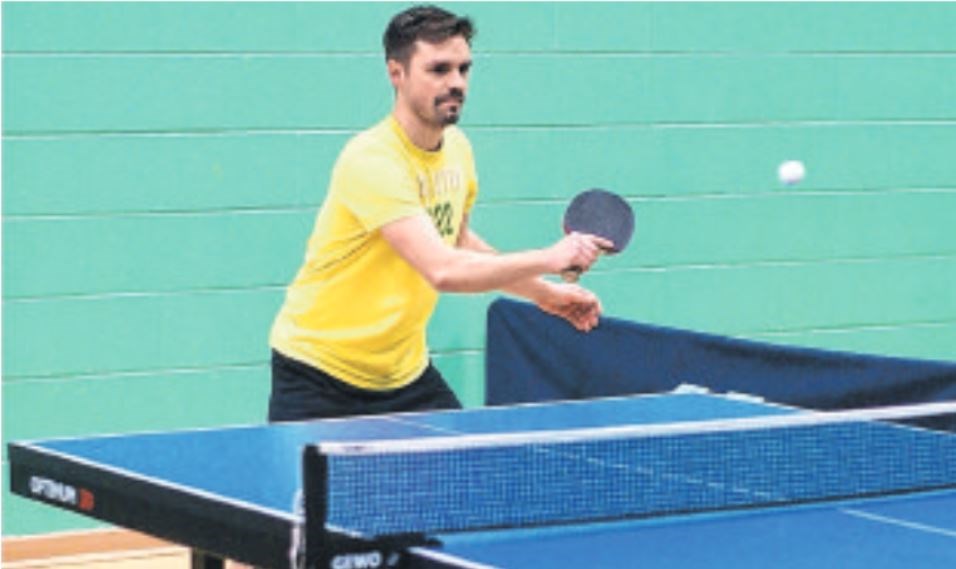 In a hat-trick decider John Callow beat Ewan Watterson 14/12 in the final set to snatch victory for Desmond's 6-4 in Div 2 against Copy Shop B.