With their sights firmly on winning the division one title, their victory over Strathallan was a welcome boost to their campaign, but it wasn’t all plain sailing with three fifth set deciders and four games settled in the fourth set. Mike Tamarov and Jason Quirk both won hat-tricks and Khayee Vinas won two games for Arbory’s eight points. Strathallan’s solitary win came from Andrew Patterson in a fifth set decider.

Both of these teams have a chance at winning the division one title so it was no surprise that the scores would be so close, with just one game settled in the fifth set and four games settled in the fourth set. Copy Shop’s Sean Drewry won a hat-trick and Paul Corran won two games for their five points and the win. For Travellers, Scott Lewis smashed his way to two wins from three, Liam Chan and Malcolm Cummings won one game each for their four points.

In a close match, the final score doesn’t reflect how close Tower were from gaining a few extra points, with three of the games settled in fifth set deciders and two in the fourth! David Parsons managed to keep up his winning streak and won one game for Tower’s solitary point. For Ramsey, Adam Teare and step-up player Chris Holmes won hat-tricks, Rhys Yardley won two games for their win and collected eight points.

The second division has been split into three groups, each with three teams. Group B will remain in the second division, however the final two games for those in groups A and C will decide which two teams progress to the end of season play-offs for either promotion or relegation. All teams keep their current points score and all have played a total of sixteen games.

In ascending order, the groups and points score are:

League leaders Play It Forward dominated their third place rivals even with one step-up player in their ranks. With the exception of two fifth set and two fourth set deciders the scores went pretty much one way, Brandon Montgomery and Step-up player Jonathan Broad won hat-tricks and also paired up for the doubles win, Adam Braidwood won two games for their nine points. Traveller’s Rob Wright was the only player to resist and won one game for the team in a third set tie-break 10-12.

Considering the difference in league positions of these teams, this was a close fought match with seven tie-breaks, three fifth set and two fourth set deciders. Both Glenn and Charlie Callow won hat-tricks and also paired up for the doubles win, Sally Green won one game in three straight sets. For Copy Shop, Sonja Shaw and John Paul Banaag won one game each for their two points.

In this mid-table battle, it was inevitable the score would be close and despite some exceptional performances with no less that nine tie-break sets, the predicted result was realised. Desmond’s Mark Davenport turned up for his team after a long absence and won two challenging games, Peter Russell won one game and their partnership paired up for the doubles win and Jo Healey won one game very convincingly. For Ramsey, William Dalugdugan won a comfortable hat-trick and Frank Feeney battled hard to win two games, both in fifth set deciders.

Even though this fixture was a bottom of the table match, the final result was a surprising one given that Peel forfeited one player so they had it all to do! Ronan Thompson won a convincing hat-trick, Claude Butler won one game and their partnership went on to win the doubles in three straight sets. Ramsey’s brothers Jake and Thomase Morris saved tow valuable points by winning one game each to level the score at 5-5.

Despite Peel playing with a one player forfeit, this bottom of the table match was an almost one way street, it was newcomer to the team Zoltan Daniel that dug in and won one game for Play it Forward for their respectable four points. Peel’s Lauren Allwright won her first hat-trick of the season, I’m sure she thinks it’s about time! Sam Preece won two games and they partnered up and also battled hard for the doubles win which was achieved in four sets.

Peel began this match with a one player forfeit against the league leaders, not a happy place to be! Nevertheless, James Devereau didn’t let that stop him from winning a hat-trick and Suvi Shaw winning one game for their four valuable points. Copy Shop’s Jake Levine and Corbyn Schade won one game each and also partnered up for the doubles win to add to their overall tally making 6 points.

In a match with only one game settled in the fifth set and one in the fourth, this was a convincing whitewash by Ramsey of the IOM JD team. The team were Wilma Daludugan, Francesca Lord and Henry De Silva, Wilma and Francesca paired up for the doubles win. 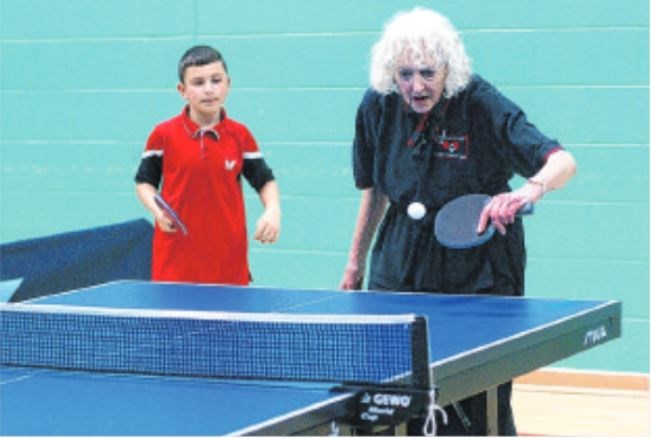 Copy Shop F's Amit Lannin hit a hat-trick and then partnered Pat Halliwell, who is over 60 years his senior, to a straight sets win in the doubles to secure 5-4 victory over Peel E in Div 4.