Every year, the Isle Of Man Table Tennis Association host a show case event to decide the best individual players from various categories including Men's, Women’s, Juniors (U14 & U18), Doubles, Mixed Doubles, over 40 and over 60s. All contestants fought hard to win their respective divisional titles, and the winner’s awards will be presented at this year’s Prize Presentation Evening, to be held on Friday 30th October 2020 at Douglas Golf Club.

Mens Singles
From an initial line up of twenty players, the quarter finalists were Sean Drewry, Malcolm Cummings, Scott Lewis and John Magnall. Both semi-final matches were concluded in straight sets; Drewry beat Cummings 11/9, 11/9, 11/2 and Lewis beat Magnall 11/4, 11/3, 11/3. The final between Sean Drewry and Scott Lewis was hard fought initially but then the current island champion Drewry, stepped up a gear and retained the title in the fourth set, the scores were 5/11, 11/8, 11/2, 11/9.

The ladies title was contested by four ladies, Khayee Vinas, Libby Quaggin, Sonja Shaw and Wilma Dalugdugan. Vinas and Shaw progressed through to the final and last year’s runner up Khayee Vinas won the 2020 title 11/5, 11/7, 11/6.
Mens Doubles
The competition for the mens doubles title was fiercely fought with seven pairs competing for the title. The players who progressed through to the semi finals were Chris Holland & Jason Quirk, Scott Lewis & Chris Holmes, Malcolm Cummings & Marc Townsend and Sean Drewry & Sasha Thomas. For the final, Holland & Quirk beat Lewis & Holmes 11/7, 11/5, 11/3, Cummings & Townsend beat Drewry & Thomas in a fifth set decider 11/9, 8/11, 9/11, 13/11, 11/7.
In the final, the Travellers duo Cummings and Townsend beat Holland and Quirk in a very close fought match 12/11, 11/7, 12/10 to claim the title.

The ladies doubles was played as straight final as there were very few entrants this year, Khayee Vinas and Wilma Dalugdugan took on Sonja Shaw and Libby Quaggin. Vinas and Dalugdugan prevailed as winners of the title in the fourth set, 11/7, 6/11, 11/8, 11/7.
Mixed Doubles
This was a round robin played between four teams, in which the semi finalists were Khayee Vinas & Scott Lewis and Maggie Mulhern & Chris Holmes. The powerful duo of Vinas and Scott were unstoppable by the experienced Mulhern and fast-footed Holmes and won the title in straight sets 11/3, 11/7, 11/5.
Under 14s
The under 14s competition is always enthusiastically fought and the matches are often long! This year was no exception. The semi finalists were Charlie Callow, Amit Lanin, William Shooter and newcomer Age Niyazi. The finalists were Callow who beat Lanin in a fifth set decider 4/11,11/13, 11/3, 11/4, 11/6 and Shooter who beat Niyazi in straight, close sets 11/9, 14/12, 11/5.
The final between Charlie Callow and William Shooter was a close fought match with Callow claiming the title in the fourth set 8/11, 11/8, 11/7, 11/8

Over 40s
There were almost as many entries for the over 40s as the mens open singles and fought just as hard! The semi finalists were
Chris Holland, Rhys Yardley, Jason Quirk and Malcolm Cummings. To decide on the finalists, Holland beat Yardley in the fourth set 12/10, 12/10, 9/11, 11/6 and Quirk beat Cummings 5/11, 11/6, 11/9, 11/8.
The final was played on the Friday night and was the last result to be decided from the tournament, the match between Chris Holland and Jason Quirk did not disappoint! Holland broke Quirk in the first set 11/6, in he second Quirk fought for every point to regain control of the match, but just lost out in a tie-break 12/10. The third set was dominated by Quirk as his confidence returned, putting Holland under pressure and won 7/11. In the fourth set, Holland regrouped and went back to what worked well for him in the first two sets, and finally took the win and the title in the fourth set 11/7.

The over 60s tournament is always well attended and this year’s was no exception. These players know each others games so well, it’s hard to predict who will come out on top! The semi finalists were flat hitter Malc Lewis, the flamboyant Steve Curtis,  the steady Malcolm Lambert and the long-levered Graham McFarlane. The first semi final match between Lewis and Curtis was won by Lewis 11/7, 11/4, 11/3 and the second between Lambert and McFarlane was a much closer match, with Lambert finally taking the win in the fifth set 8/11, 8/11, 11/7, 11/5, 11/3.
The final was enthusiastically played with Lewis dominating the first two sets 11/6 and 11/3. In the third set, Lambert launched a strong counter attack to Lewis’s dominance but lost the set and the match in a third set tie-break 12/10 leaving Lewis to collect the over 60s title.

On Wednesday 28th October the IOMTTA will be hosting the infamous Fun Doubles Championship which takes place during half term week. This is a chance for players from all divisions to partner up and be in with a chance of winning a trophy. The competition always produces results from unlikely winners!
And finally…. Did you know there are three clubs on the Isle of Man that you can visit if you are interested in playing table tennis; on Monday, Ballakermeen youth table tennis club, on Tuesdays the Buchan Table tennis club and on Thursdays, Ramsey table tennis club. For more information, contact us on facebook www.facebook.com/TableTennisIOM 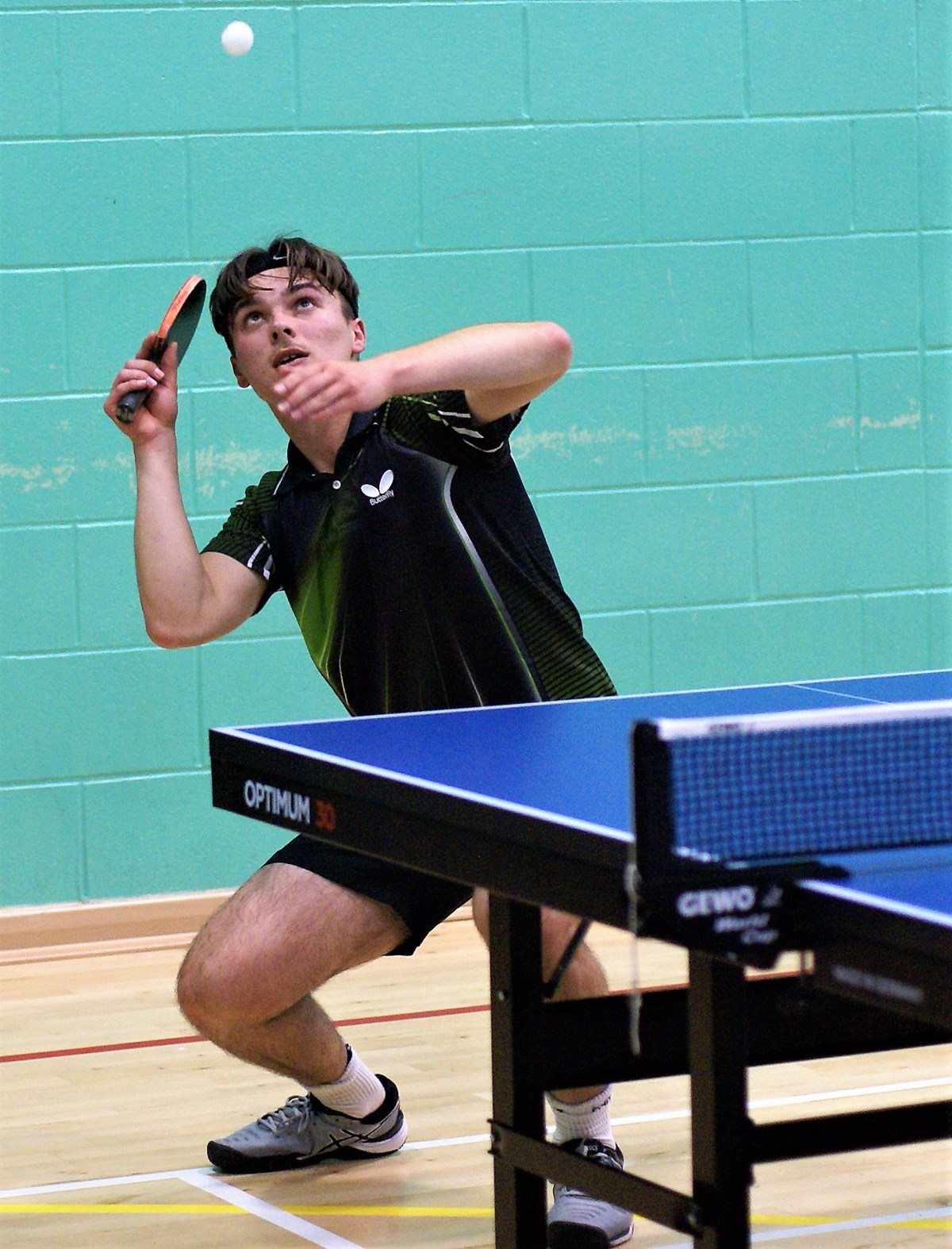