JULY 14 2012 - Squad learn from JBL Qualifiers.   Earlier today, a young and inexperienced Kingfisher team, most of whom will still be juniors in three or four years time, were pitched against very strong opposition in the Junior British League Qualification tournament held at Tipton, Staffs.

Well organised events like this, in which the club can support and mentor individual players, are part of Kingfisher’s development pathway for ambitious young competitors who gain experience of competition match play and large arenas.  The young Kingfisher squad came back from Tipton with their heads held high; everyone had personal successes of one form or another; whether in new-found confidence, inspiration to train harder, successful match tactics or wins against higher-ranked players.

The tournament involved 30 teams, from across the British Isles, competing in six groups, and each hoping to win just one of four places in next season’s League. Although we didn’t know it at the time, we were drawn in what must have been the strongest of the six groups, having to play sides from Rotherham, Ulster, Derby and Swansea. By beating the team from Swansea in our last match we finished in a creditable 4th place whilst the Ulster and Derby sides progressed to the next round, eventually taking two of the four coveted places in next season’s Junior British League. 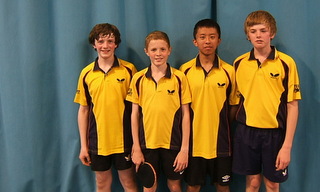