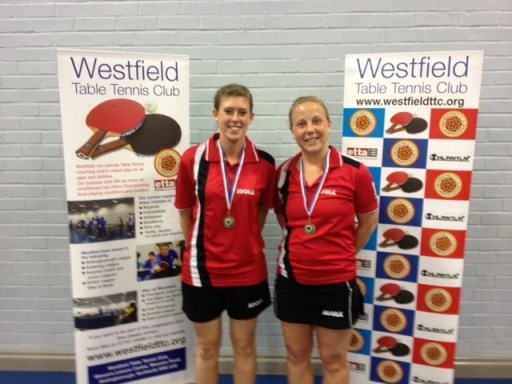 Taking part in the event were the Top 8 English League teams, who had qualified via the Regional zones.

Leamington Spa’s first match was against Leicester, who were represented by former senior international Karen Smith and top 5 U13 Shreya Meata. Charlotte had a tough first match against Karen Smith, losing 0-3, however the match was equalised with Kate beating Shreya 11-3, 11-4, 11-3. The doubles match was very close with Kate and Charlotte going 2-0 down, only to fight back to win the next three games 11-8, 11-8, 11-7, which was a great comeback for the Warwickshire pair, and included a surprising backhand winner from Kate! At 2-1 to Leamington Spa,  Kate then played Karen, going down 1-3 (11-9, 8-11, 15-17, 7-11). Charlotte then went into the final match and played exceptionally well against the young player, winning 3-1, to give Leamington a 3-2 win in their first match.

Leamington Spa then faced Bracknell & Wokingham. Kate and Charlotte continued with their winning ways, demolishing their opponents Sharon Mitchell and Wendy Porter 5-0, losing only two sets on the way.

The final group match for Leamington Spa was against the number one seeds Derby. Kate faced Latvian player Inta Zdanovska and unfortunately went down 3-0 (10-12, 9-11, 7-11). Charlotte had an equally tough match against former English Schools International Emily O’Sullivan; with the doubles being equally tough. Kate battled hard to get a point on the board with a 3-1 win against Emily; however despite Charlotte’s hard work and effort, it was not enough to get the better of Inta. Leamington lost 1-4 to Derby, however had successfully finished in second place in group A.

Leamington Spa were therefore in the Bronze medal (3rd and 4th) playoffs against number two seeds Hastings. With Leamington winning the coin toss, they selected to play as the home team with Kate going on against top 30 senior Rose Rainton. A first set comeback from 6-10 down to win 13-11 was a great confidence boost for Kate who continued with her aggressive and varied shots, winning 12-10 and 11-9 in sets 2 and 3 respectively. This was a very good win for Kate against a very consistent player. In the second match Charlotte played the hard hitting Lisa Standen. Charlotte started the first end brilliantly going 7-0 up, only for Lisa to hit back to 7-6. Charlotte held on to win the set 11-8, and then continued to battle with the nerves to win 11-6 and 11-9. The fourth doubles of the day for the current Warwickshire Champions went from strength to strength winning 3-0 and guaranteeing the Bronze medal!

Kate and Charlotte were delighted with their day’s performance and successes! In a very close final Leeds beat Derby 3-2 to become the 2013 Rose Bowl Champions. 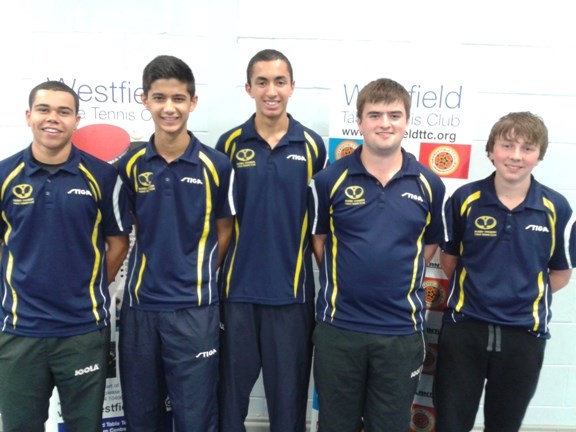 Taking part in the event were the Top 8 English League teams, who had qualified via the Regional zones so to have two sides in the top 8 attests to the strength of junior table tennis in the area.

The A team won all their group matches and thus played for Gold/Silver against Wembley and Harrow, which was basically a London Academy side with Gabriel Achampong, Charlie Austen and the two Kassal brothers. 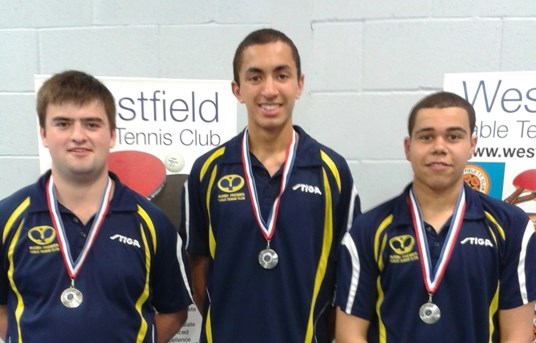 They lost the final 3-1 with Loz taking the one v Omar Kassal, but neither Matt nor Loz could contain Gabriel who didn't seem to miss a thing, even when Matt and Loz unleashed bombs and it was the same story in the doubles, though Matt and Jesse did very little wrong!

The B side had really close games all day but couldn't quite manage a win in the group stages, although they took some considerably higher ranked players to 5 in several matches.

The extra experience just managed to gain the edge, but in the final play-off match v Bournemouth A both Anshul and Lee won their singles and then won the doubles to finish 7th overall. Quite an achievement bearing in mind their lack of experience at that level.

All in all a pretty long but enjoyable day for everyone!

The Senior team was not involved in the Wilmot Cup Final stages but can take some consolation in going out in a close match against Birmingham in the regional rounds, we are just in the wrong region, Birmingham won the Wilmot Cup!!