The Northants County Table Tennis Association (NCTTA) have been successful in re-negotiating with T & K Precision Ltd. who sponsored the Associations 2016-17 County Closed tournament and will continue for a further two years.

The Sponsors are specialised to the racing industry, including most major F1 teams and based at Round Spinney, Northampton.

The Association (NCTTA) are fortunate in having a good relationship with T & K Precision Ltd.

Dan Smalley was the man of the moment at the Northamptonshire County Closed tournament as his name was etched on the men's singles trophy for the first time.

The third seed enjoyed a fine weekend at his Westfield home and walked away with three finals night titles.

After number one ranked Andy Trott had to pull out after the group stage through injury Smalley became one of the tournament favourites but didn't have it all his own way.

He eased through his group but was taken the distance by club-mate Roumen Stefanov before winning 11-6 in the fifth in the quarter-final.

In the semi-final he faced an even bigger scare after falling 2-0 down to Henry Arthur, who had taken advantage of a walkover against Trott, before coming back to win 11-3, 11-7, 11-2.

And in the final he produced a composed performance to dispatch first-time finalist Adam Wilson 11-9, 11-7, 11-9.

Smalley and team-mate Nicole Bird also kept hold of the mixed doubles title with a convincing win over Richard Elliott and Charlotte Binley.

It was an equally fine night for Bird who left with all three major titles on offer.

She opened her night by retaining the women's doubles trophy with partner Jordan Moss against Binley and Anna Wilson 3-1.

Her father Kevin made sure two Birds went home with trophies after winning the veteran men's singles.

Shay Graham made sure he bettered last year's tournament by winning the junior boys' singles.

Harborough junior Danny Verrall won the most events after claiming no fewer than six titles.

Four of those came in the banded events after he won bands 2 and 3, the junior banded singles and the band 1 doubles with Cochrane.

He had earlier won the under 15 boys' singles and the under 18 boys' doubles, again with Cochrane.

Cochrane also tasted success in the band 1 singles after winning despite being unseeded.

That helped him win a new award, the Ken Marchant Trophy, in honour of the former county chairman who died in 2018.

Decided by the tournament committee, the award goes to the most promising junior.

He also escaped a tough men's singles group by beating Chris Haynes 3-0 before seeing match points come and go in the last 16 against Elliott.

Veteran trophies were shared across the field with Kevin Bird adding the over 50 doubles with Stefanov to his finals night success.

Trott did manage to pick up one trophy before injury prevailed as he and Elliott won the over 40 doubles against Bird and Vidal Graham.

Brian Wooding and Chris Stone won the over 60 doubles with losing men's singles finalist Wilson beating the younger Bird in the 18-21 singles final.

Mark Holly also picked up a trophy by beating Bronwen Grigg in the band 4 final. 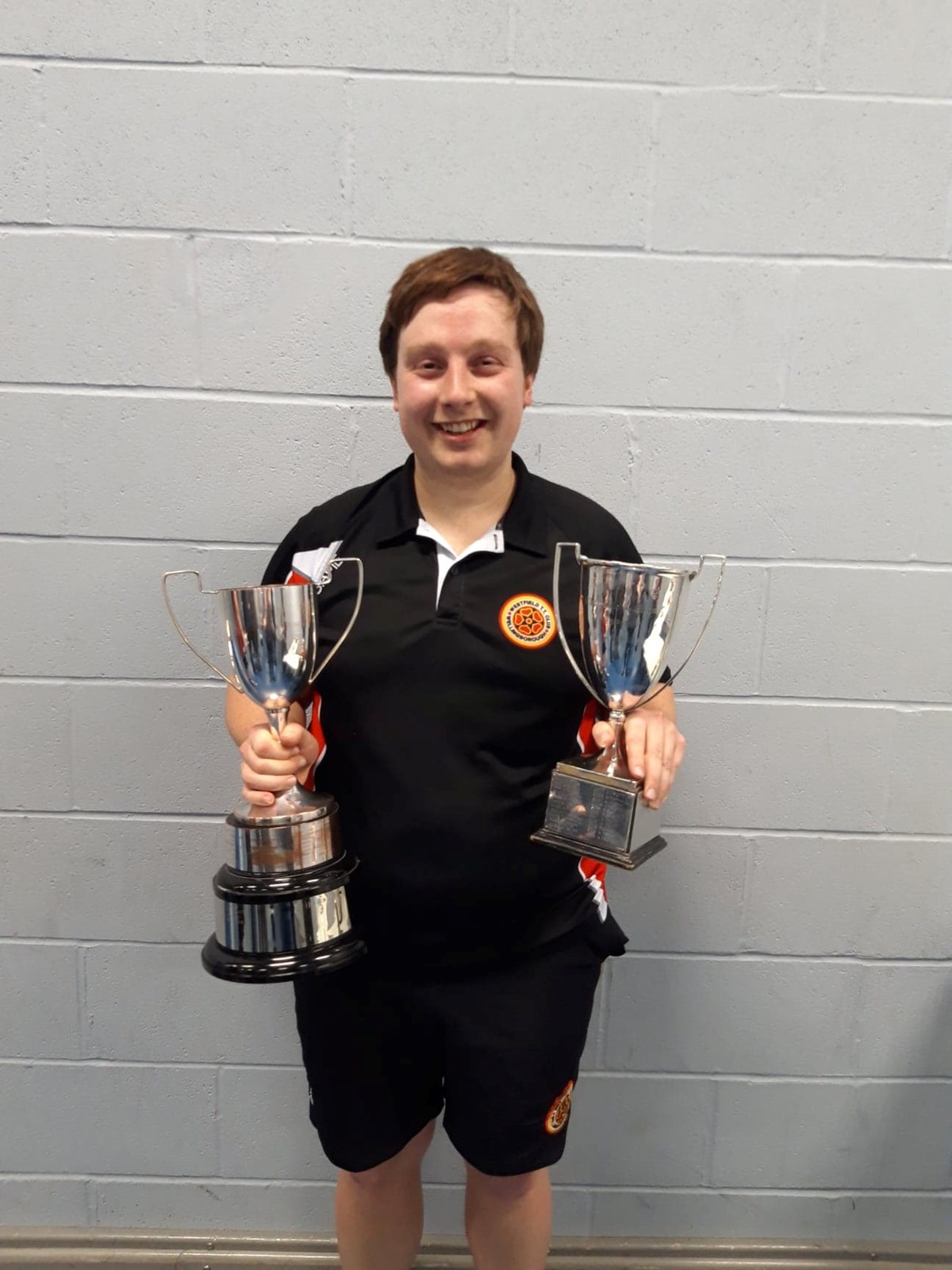 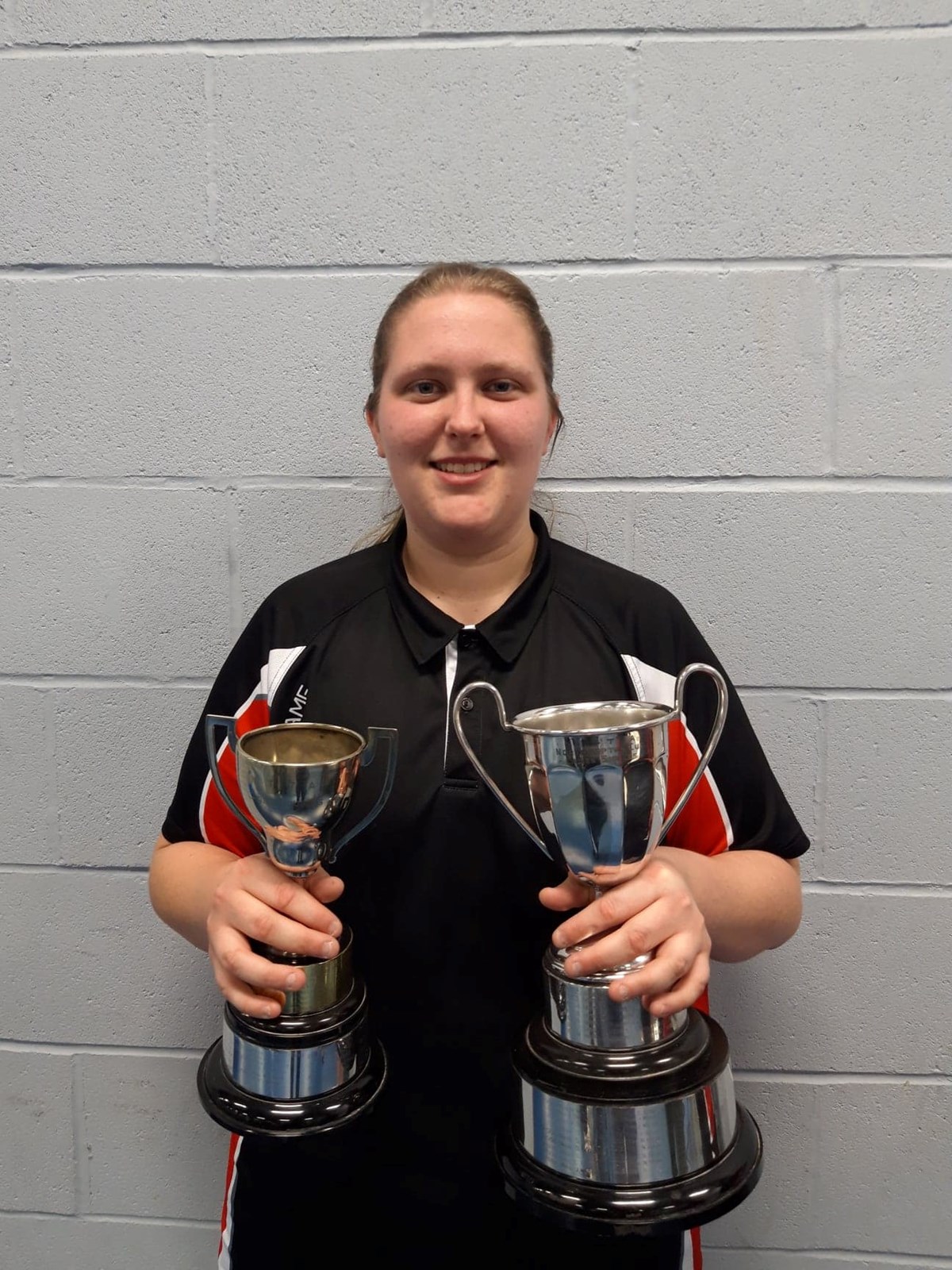 He took the first 11-9 but was pegged back when Wilson levelled it with an 11-7 game of his own.

But Trott did what he’s done to so many players over the years by pulling away, taking the final two 11-5, 11-7 to retain his title.

There was a shock in the men’s doubles however as Trott and partner Adrian Roper fell at the semi-final stage to Dan Smalley and Matt Horrocks.

The Westfield clubmates won in five nailbiting ends before an inspired performance in the final saw them beat John Fuller and Nigel Metcalfe.

In the women’s singles, Nicole Bird retained her title with a win over Brigitta Palinkas who had earlier knocked out number two seed Jordan Wood.

Bird made it three finals night wins out of three in the mixed doubles with Smalley against the brother and sister pairing of Chris Haynes and Liz Adams.

Trott won the veterans singles title against Vidal Graham and there were wins in the over 50s and 60s respectively for Metcalfe and Fuller.

Sam Wilson ensured he took home some silverware with a comprehensive junior boys win against Shay Graham, and teamed up with Corby youngster Alex Cochrane to take the junior doubles.

Anna Wilson was the junior girls’ winner, beating Evie Elliott in the final.

Jamie Anderson won in the under 13 boys against Nathan Dixon in the final.

Ben Aldridge was the under 11 boys winner, beating Benny Benko in the final.

In the banded events Alex Cochrane took the headlines with wins in both the Band 2 and Band 3 singles.

U11 Boys’ Singles winner: B Aldridge, runner-up B Benko

Andy Trott took the headlines at the Northants Table Tennis County Closed Tournament as he won the men’s singles yet again.

Trott blew the field away, not dropping a single end en route to the title.

In the semi-finals he saw off the pimpled Bulgarian Roumen Stefanov before facing old foe John Fuller, who beat Kevin Bird, in the final.

The pair had already met in the over 40’s final with Trott also winning in straight games.

Nicole Bird regained her women’s singles crown with a win over doubles partner Jordan Wood in the final.

Earlier on finals night the pair had joined forces to battle past Clare Coles and Sue Moloney in four ends.

Wood also took the mixed doubles crown with Trott after beating the brother and sister duo of Chris Haynes and Liz Adams.

Haynes and Adams had stunned Bird and an out-of-sorts Dan Smalley in the semi-final but found the combination of Trott and Wood a step too far.

It was a good tournament for Haynes who made two appearances on finals night, also reaching the men’s doubles final.

The final was without top seeds Trott and Steve Silk, who crashed out at the first hurdle to Richard Elliott and Brian Wooding.

Haynes and partner Henry Arthur took on Fuller and Nigel Metcalfe but lost out in four ends.

The Corby pair did, however, pick up the over 40 doubles title with a shock win over Trott and Silk.

It was a family affair in the junior boys’ singles as Corby Smash brothers Sam and Adam Wilson faced off for the title.

Sam raced into a 2-1 lead but was forced into a decider before edging home 11-8 in the fifth.

Nicole Bird made it a treble of titles as she won the 18-21 singles, crushing Guy Sparrow in straight games.

John Fuller added to his men’s doubles crown with wins in the over 50 and over 60 singles and the over 60 doubles with David Simmons.

Other veteran’s events went the way of Moloney (over 40 women’s singles) and Silk and Bird (over 50 doubles).

Evie Elliott and Anna Wilson shared junior titles after facing each other in two finals.

Elliott got the better of her counterpart to win the under 18 girls event but Wilson took revenge by winning the under 15 girls.

The pair also won the under 15 girls’ doubles together.

Shay Graham won the under 15 boys’ singles against Daniel Mann, as well as the under 18 boys’ doubles with Ben Tombs.

Graham did however lose out in the under 15 boys’ doubles with Mann to Jacob Tattersall and Manav Pandya.