The Seniors will play in Div 1A and will compete against Bedfordshire, Cheshire, Essex, Lancashire, Lincolnshire, Middlesex 2 and Northumberland. Their matches will be held on 17 and 18 November at St Neots and on 1 December in Scunthorpe.

Westfield Table Tennis Club hosted half the teams in division 1A for the first day of the senior county championships. The Northamptonshire team consisted of Chris Doran, Sam Wilson, Dan Smalley, Nicole Bird and Bhavika Mistry.

Norfolk announced before the match that they were a women down. This meant Northants effectively started 2-0 up. The match started well with Northants secret weapon Chris Doran winning against Norfolk number 2 in 4. On the second table Dan Smalley did not fair quite as well against the Norfolk number 3, going down 3-0 and amassing only 12 points. Games 3 and 4 saw Bhavika Mistry ease past Norfolks Ella Barnard before Sam Wilson struggled against a sharp looking Norfolk number 1, going down 3-0. A difficult county seniors debut for both Dan and Sam, chalking up only 23 points between them. At the half way point Northants found themselves 4-2 up, still all to play for. The second half was kicked off in similar fashion, Chris beating Norfolks number 1 3-1 and Dan losing to Norfolk number 2 3-2. Northants needed one of the final two matches to start the day with a win. Things didn't look good for Nicole who started slowly (although had to wait until game 9 to play her first match), going 2-0 down. However she kicked up a gear and in the end won comfortably in the fifth. The final match saw Sam outplay Norfolk number 3 (much to his frustration) winning in 3 straight.

After finishing our first match early, we got to watch a little of the Bedfordshire vs Essex match and all agreed Beds looked like the team to beat. We went in therefore knowing we needed to improve in order to get another result. The first two games on were Sam against the Beds number 1 and Dan against the Beds number 3. Sam won the first end and found himself with a commanding lead in the second against the much higher ranked player. However a few uncharictaristic errors let his opponent back in and Sam ended up going down 3-1. In contrast Dan found himself 2-0 down in no time, however he fought back well to claim it 11-7 in the fifth. Next up was Nicole and Chris, both running out comfortable 3-0 winners. Bhavika rounded out the first half with a 3-0 loss to the Beds number 1, a tricky customer playing an unorthodox style with pimples. Bhavika struggled to find any rhythm.

At the half way stage, Northants found themselves with a narrow lead at 3-2. The second half started with a superb chopping display by Sam, coming through against the Beds number 3 3-1. Bhavika and Chris took to the table next, both easing through their opponents 3-0, Chris in particular looking in fine form. Having secured an unlikely victory the final 2 games were played out by Dan and Nicole, both taking and end but succumbing 3-1.

Having won the first 2 matches, confidence was running high and we were excited to get the third match underway. Things got underway with Chris and Dan taking to the table first. Chris dispatched the Essex number 2 in his usual fashion, dropping one end to make things interesting. One end was all Dan could muster, going down 3-1. Bhavika and Sam were up next, both against tricky opposition. Bhavika took an end against the Essex number 1 but in the end went down 3-1. Sam played the very wiley number 1 who proved to be very clever against the consistency of Sam. After 3 close ends Sam found himself at the end of a loss. Nicole rounded out the first half going down in 4 ends against a tough Essex number 1. Half way through the final match and it was all to do, with Northants trailing 4-1. In the final singles matches, Dan found himself quickly 2-0 down. Fighting back well to level the match at 2-2, however it never looked likely in the fifth, losing 11-9 in the decider. Bhavika and Chris took to the tables next, Bhavika fighting back brilliantly from 2-1 down and playing some of her best table tennis of the day to run out a 3-2 winner. Chris completed his perfect day's work with a quick straight sets victory over the Essex number 1. The final 2 matches featured Nicole, losing in straight sets to Essex number 1 before Sam Wilson played out an epic 5 end match at this point in an empty hall, succumbing in the end game 5 in the fifth.

I would like to award a player of the day and it is difficult to look past Chris (although I'm going to). He was superb all through the day and never looked in any danger. However this was very much expected. Sam and Bhavika also put in many excellent performances, fighting back from losing positions to get a win for the team. It was a tough choice between the two but I am going to give it to Sam. On his county senior debut he played exceptionally well, beating a couple of players on paper, he had no right to beat. He also troubled people throughout the day making people play to their best  ability to come away with the win. If he keeps improving at the same rate it won't be long before he is more than troubling these top players. 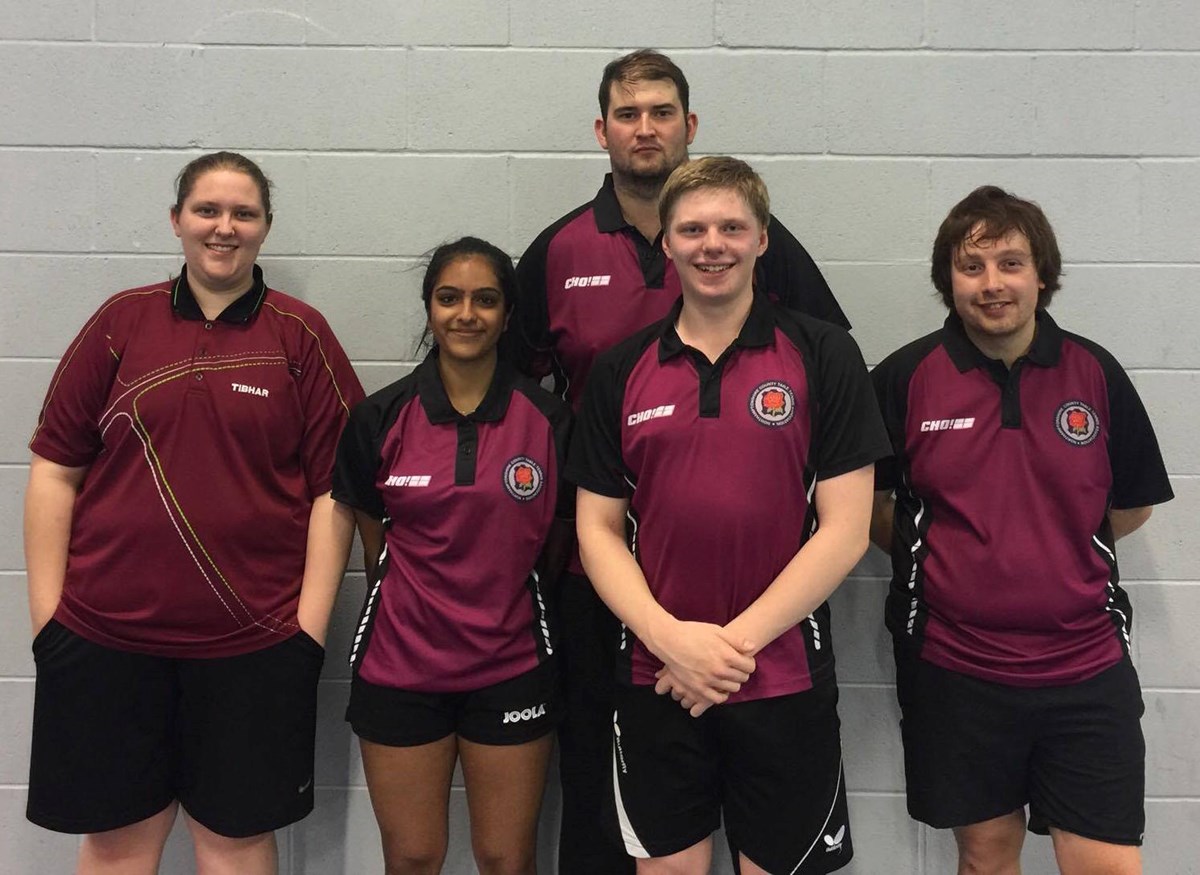