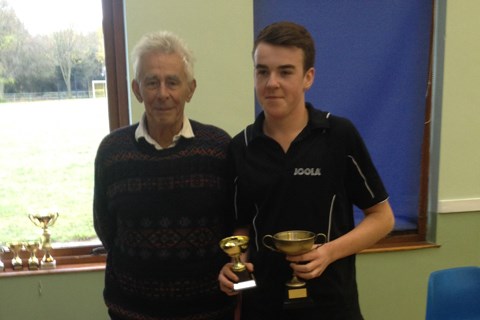 Survey Initiative Rowhedge British Senior National League superstar, seventeen year old James Denyer, showed the way to play with ‘hard (pimpled) bats’ winning the inaugural Colchester Hard Bat Tournament without seemingly adapting his normal attacking game! Whilst others were struggling to make the change from the conventional sponge rubber James in his own words said; “Once you feel comfortable hitting its easier to try and play your own (natural) game” - easier said than done for those Colchester players playing for the first time!

His opponent in the final was the recently crowned national Ping Pong champion Richard Hutchinson of Tollgate, his title involving a slightly different hard bat set up using sandpaper instead of rubber allowing even less spin! Hutchinson from Ipswich was the number one seed but struggled to deal with Denyer’s hard hitting style losing in four ends. The idea of this form of table tennis is to lengthen the rallies, cutting down on the spin generated by sponge rubber but to quote Hutchinson “It’s about 20% technique and 80% in the mind”. He goes on to say “The biggest challenge is to retrain your mind to react with a ‘Ping Pong’ shot rather than your normal ‘Table Tennis’ technique…” In practice most players could defend well but few could attack consistently making Denyer’s effort all the more remarkable!

Earlier in the day Denyer conquered Tollgate’s Andy Warner in the semi-final whilst there was a welcome return to Rik James (H20 Rowhedge) following a seven year absence from competitive Colchester Table Tennis. He beat Gary Young in the quarter-finals but lost out to Hutchinson in the semis.

Hutchinson was paired up with Band B winner Paul Hume in the Doubles event where seeds were drawn with non-seeds together and ironically the pairing were two of the strongest players on the day! They duly won the event beating Andy Warner and 11-year-old Gracie Edwards in the final.

With twenty-five players taking part the Hard Bat event was a definite success with a good mixture of tough competition and fun being the general order of the day!