This year’s Scottish Inter League Championships took place at the Bell’s Sports Centre in Perth from the 23rd to the 24th March, with 23 local players and 4 coaches representing the region. This is one of the biggest tournaments of the year with over 50 teams and 160 players from all over the country competing over 5 different age categories. 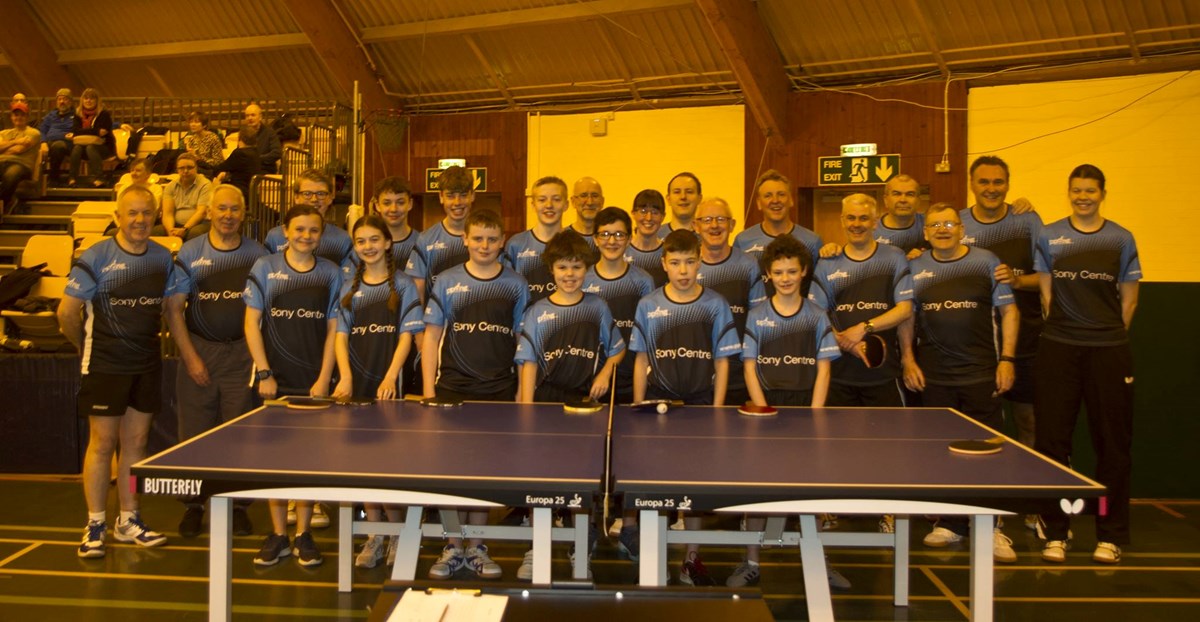 Our star team of the weekend were the Cadet Boys. Despite being the lowest ranked team going into the event, they had some great victories over the weekend against Dundee, Dumfries, Edinburgh and West of Scotland B. All three boys played extremely well - in the last match Tyler and Harry both holding their nerve to win crucial singles games and James displaying some very consistent play throughout, including taking a set off the Scottish No. 1. Thanks also to coach Peter who supported the boys throughout the weekend!

For the Minor team this was their first taste of a big competition and they probably win the award for most enthusiastic team of the weekend! Despite the high level in this event, they remained positive throughout, supported their teammates and their play improved throughout with all of the boys having close matches on the Sunday. Our youngest squad member, 10 year old Ben, also displayed great resilience after three tough five set losses at deuce to win his last match (another five setter!).

Along with the Minor Boys, the Girls team also displayed great positivity and team spirit over the weekend. Again, this was their first big competition and they competed really well throughout. Rebecca picked up a couple of good singles wins on Saturday and the girls combined really well for the doubles - at this early stage they definitely seem to have far better footwork than our last left handed doubles pairing of Notarangelo/Crawford ??…

A good win against Edinburgh B on the Saturday for the boys was followed up with a few close defeats. A 3-1 loss to Edinburgh A was tighter than the scoreline suggested with Blair losing a close five setter against the much higher ranked Jake Sommerville and the match against West of Scotland B on the Sunday also could have gone either way at points. A very decent effort from the boys and again good team spirit throughout.

As is usual at the this event the Senior Men’s competition is extremely strong. Despite this the team did manage to pick up a couple of singles victories (Daniel with a particularly impressive win over Dundee’s Ryan Docherty) and competed well throughout. Dylan was very close to picking up a very good win against Edinburgh’s Debjit in the last match, unleashing some trademark forehand winners before the effects of Saturday’s night out appeared to catch up with him…

The Vets event lived up to it’s reputation of being one of the toughest in the event. Highlights included Forbes having a cracking match against the highly rated Callum Gerrard and Brian H entertaining the crowd and proving he does indeed need the use of at least two courts worth of space…

Our last match against Dumfries went down to the wire here with us pulling off a really good five set doubles win. In the deciding match, Claire played some of her best TT of the weekend and was very unlucky to lose out 3-2, two of the ends which went against her went to deuce so not much in it at all! I (Lisa) picked up a few decent wins over the weekend against higher ranked players and at one stage led 8-7 in the deciding end against the Scottish No. 6 after some vintage forehand winners. I then promptly served off the table and lost the next 3 points - some things never change...

* The Sony Centre Falkirk for their generous sponsorship of our new team kit
* PPONG for providing us with the kit and all the printing - our new shirts gained a lot of compliments over the weekend!
* Peter, George, Emma & Rachel for all their coaching support & George for the photos
* Mando for sourcing/coordinating with the restaurant for the Saturday evening meal
* Brian H for making it on time for the team photo
* Ken, Alison, Lorraine & Roy who ran the event for TT Scotland - this is a massive event to organise and everything ran smoothly and to schedule throughout - no easy task!
* All the parents, family, friends who attended throughout the weekend to support the team - much appreciated!

Here’s to another successful event in 2020!