Congratulations to Torbay Table Tennis Academy I  who defeated Newton Bishops 5-0 in the Challenge Cup Final.   The Academy side of Dan Brewer, Patrik Cincala and Kris Piwowar were convincing champions having only dropped 2 sets in the whole competition.

Newton Bishops team of Jim McIvor, Connor Adams and Gerald Norton fought hard but just didn't get the vital points when they needed them.

Then came the closest match of the night, where Connor Adams had a chance against Dan Brewer, but Dan's terrific forehand won the day 11-9 in the 5th game

Jim had to keep the Bishops in the match by beating Kris Piwowar,  Jim suggested at the start the handicap should have been -16 not -6 for Kris,  (I suggested maybe -60!!)  Anyway Jim made a really good fist of it, and took two games off Kris, however Kris was fully in control of the 5th game to see his Academy side home to a fine 5-0 win.

Well done.  The Academy face the Bishops again in the Doubles final next week 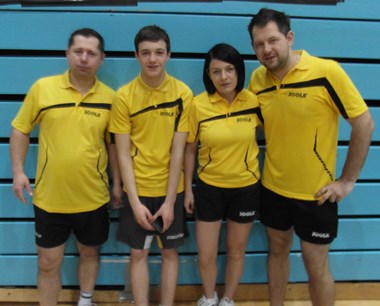