Notes from the league history

A while ago I was lent a scrapbook that was created by an early star of the South Devon Table Tennis League, Aubrey Nickels.  According to the honours lists he won the Mens Singles 3 times, the Mens Doubles twice, the Mixed Doubles once and the now discontinued Division 1 Singles Handicap Challenge Cup once. These titles were won before and after the league was suspended for the second world war, so it is likely that under normal circumstances he would have won more.

The scrapbook mostly concerns the story of the 1938-1939 season.  Aubrey Nickels, 17 at the time, played for Torquay YM Nomads in division 2 after they had been promoted from division 3 the season before.  He also won the Mens Single this year as a division two player; Krzysztof Piwowar manged that more recently but it can't have been a common achievement. 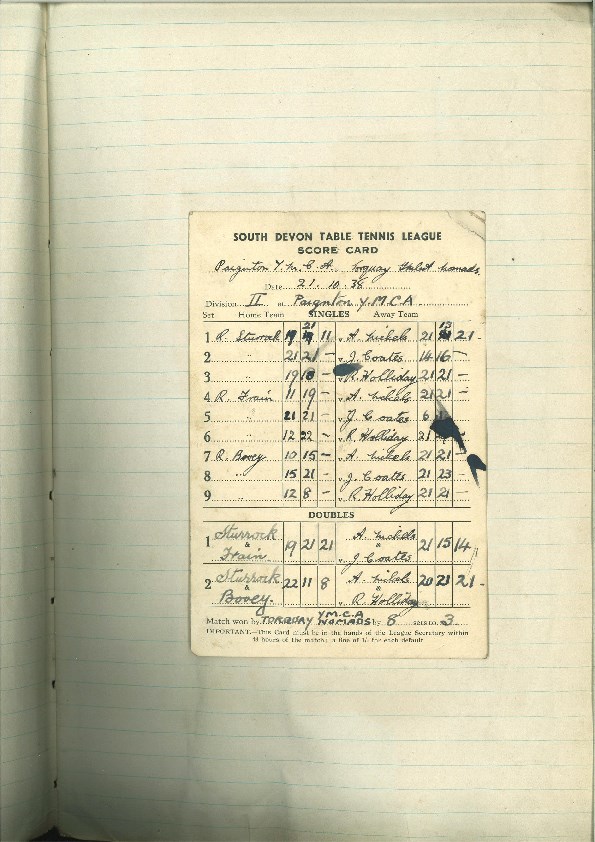 The scorecard from an early match for Torquay YM Nomads away to Paignton YMCA.  A good match for Aubrey Nickels, who won 3 singles and a doubles, this was normal for him this season though.  Interesting to see how the match scorecard and the format of the matches have changed; obviously they are still playing 21-up, but it seems that they played two doubles instead of one (I don't know when that changed). 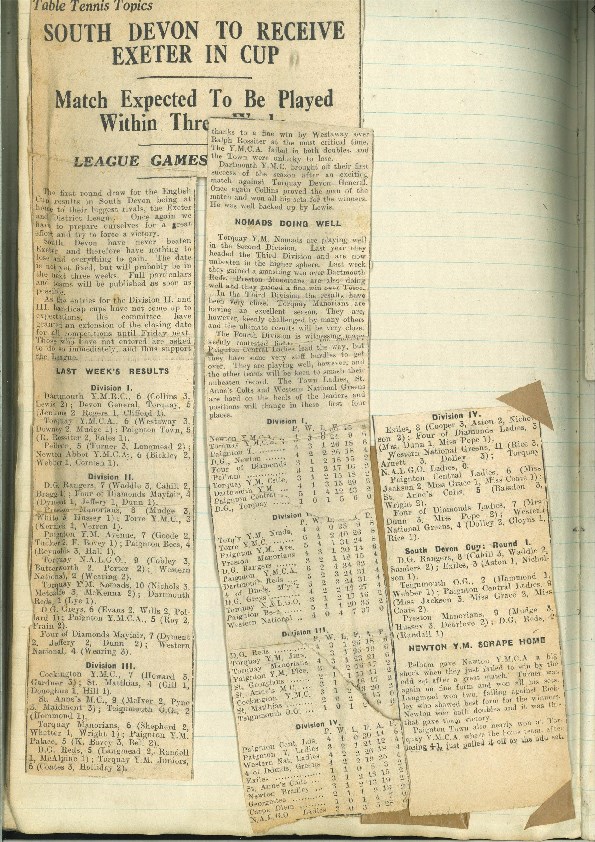 A typical weekly newspaper article about the league, including early league tables.  Note that the league scoring system was also different: two points for a win, none for a defeat regardless of margin.  I do know from the small number of cuttings for the following season that they had changed to the system we have now (although they were still playing two doubles) so it appear that this is the last season the league employed the two points for a win method.

Nickels's team already in the lead with a game in hand. 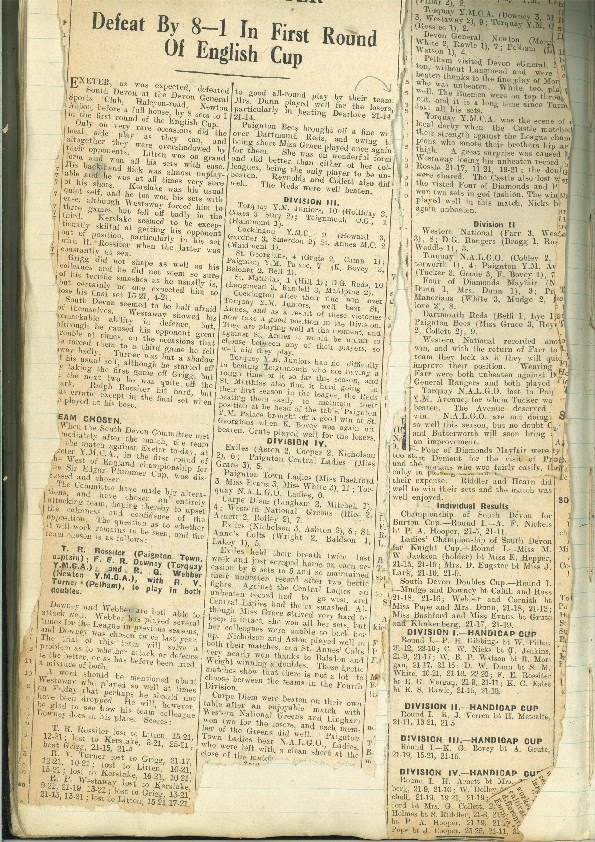 Hmm, not very well.  This was not a surprise though as the Exeter League was regarded as stronger at the time.

The season was not without controversy; then, as now, clubs and the league didn't see eye to eye.  Newton Abbot YMCA took it to another level though when they withdrew from the league half-way through: 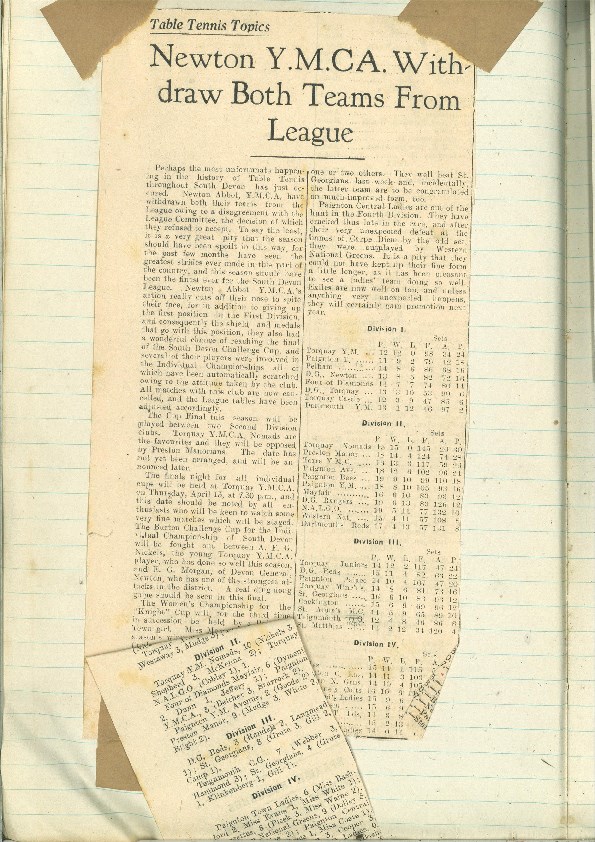 They were back a couple of weeks later though with their tails between their legs: 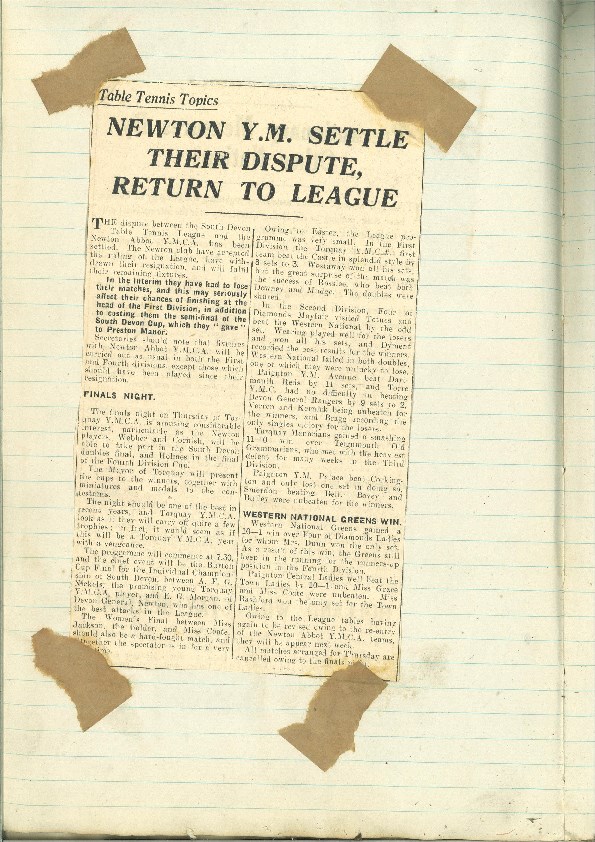 Unfortunately I have been unable to find out what the dispute was about.  It appears that they disagreed with a ruling that the league made but the newspaper articles give no details.  If anyone knows what this was about I would be happy to update the article!  Although Newton Abbot YMCA were allowed back in that had to forfeit the matches that they were due to play in the intervening period, something which would cost them dear at the end of the season.

Another difference between then and now is that in those days they had a finals night; I am not sure when this stopped happening.  It is occasionally raised as something that might be re-introduced.  For Aubrey Nickels it was a personal highlight as he won three titles on that day: 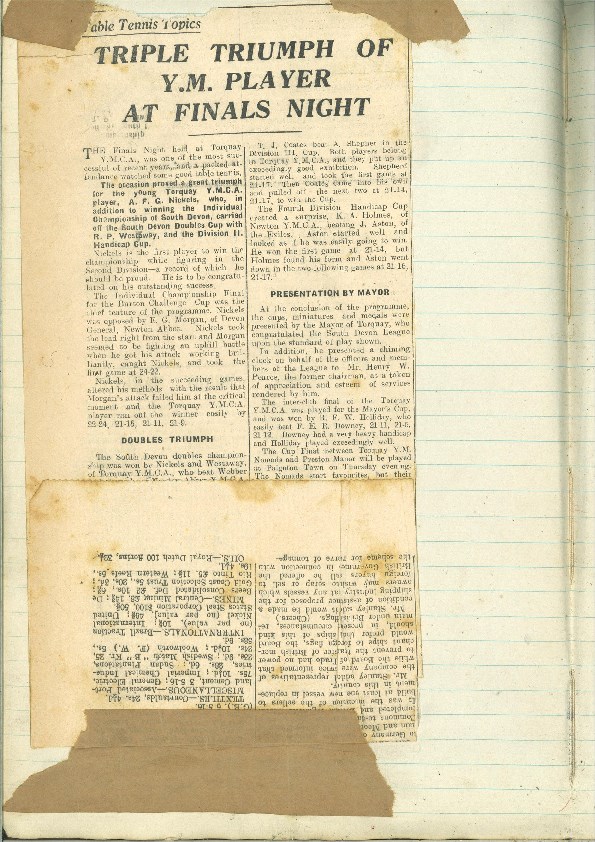 Included in that trophy haul was winning the individual championship (the Burton Cup, still played for today) as a second division player, the article notes this was the first time this had happened.  He also won the doubles cup and the division 2 handicap cup.  The fourth trophy for Nickels came when he helped his team win division 2 of the league: 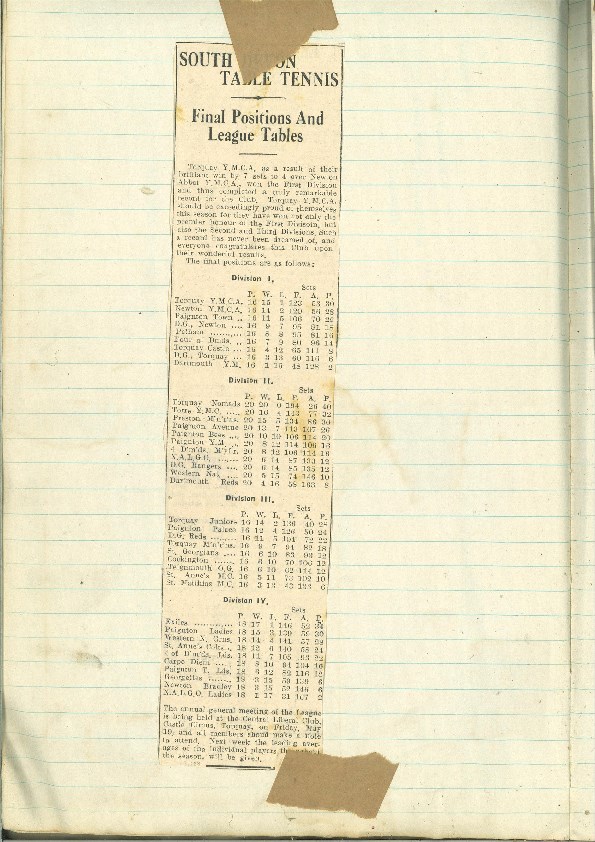 A comfortable win in the end with a 100% record.  Torquay YMCA won the league overall pipping Newton Abbot YMCA, whose mid-season antics and the matches they had to concede as a result appear to have cost them the title.

Other notable differences between then and now were in how the individual tournaments were run.  There was the Burton Challenge Cup which was an open singles tournament for the whole league; this is still run today.  There was also a doubles cup.  There were also divisional individual championships, one for each division, and curiously these were handicapped whereas the Burton and Doubles cups were not. 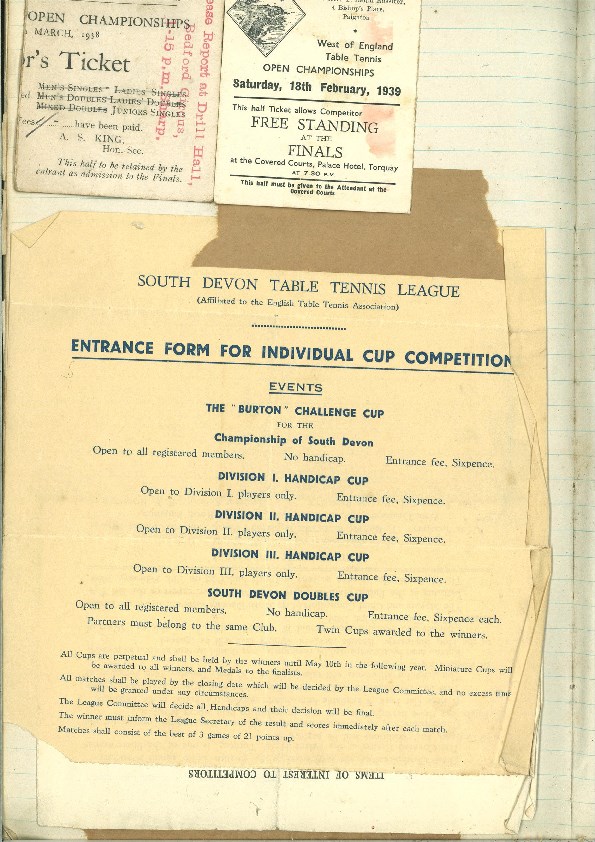 Not only that but the management of the tournament was totally different.  Instead of playing the entire events in a single day like they do now, the games were played over the course of the season with players arranging among themselves when and where to play, rather like the teams cups are run now.  It would be interesting to know how well this worked, I don't know when it was changed. 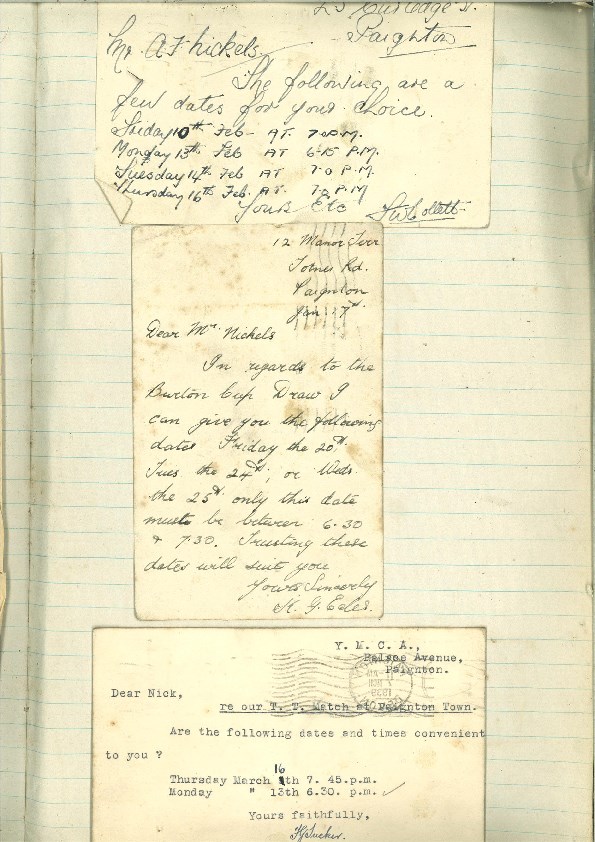 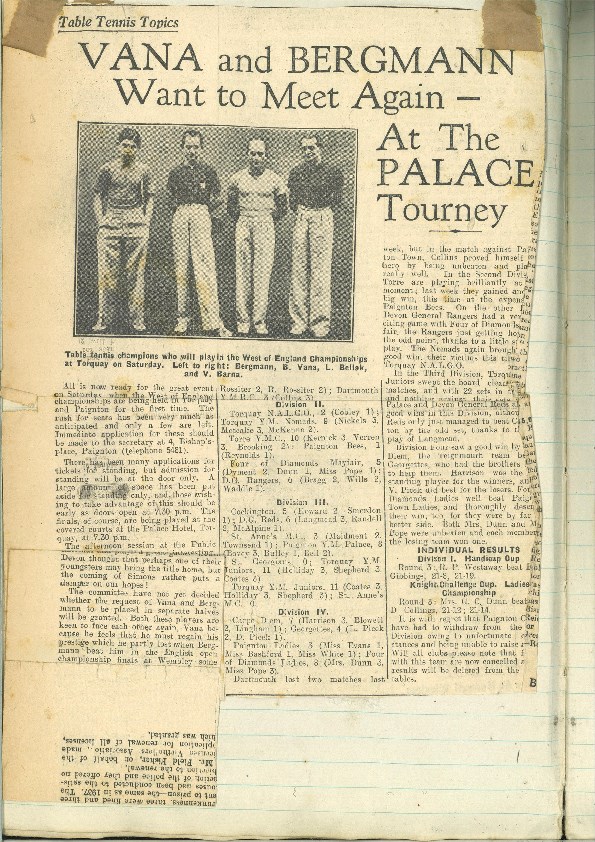 That is Richard Bergmann, Bohumil Vana, Laszlo Bellak and Viktor Barna, all world top 10 players and in the case of Bergmann, Vana and Barna all multiple world champions over their careers.  Bohumil Vana had beaten Richard Bergmann at the last world championships but Bergmann had more recently won the English Open beating Vana in the final in what was described as "the finest game ever seen", so anticipation was high.  They weren't just there to play amongst themselves though, local and national players also took part including Aubrey Nickels and he met Viktor Barna in the 4th round where he "gave a good account of himself" although of course he lost.  His performance was somewhat overshadowed though by the emergence of 15 year old Betty Blackbourn from Exeter, who had only started playing 16 months prior but who reached 4 finals, winning 3 of them and whose performances were so good that they earned her an international call-up.

This is the only (rather grainy) image I can find of Aubrey Nickels in the clippings: 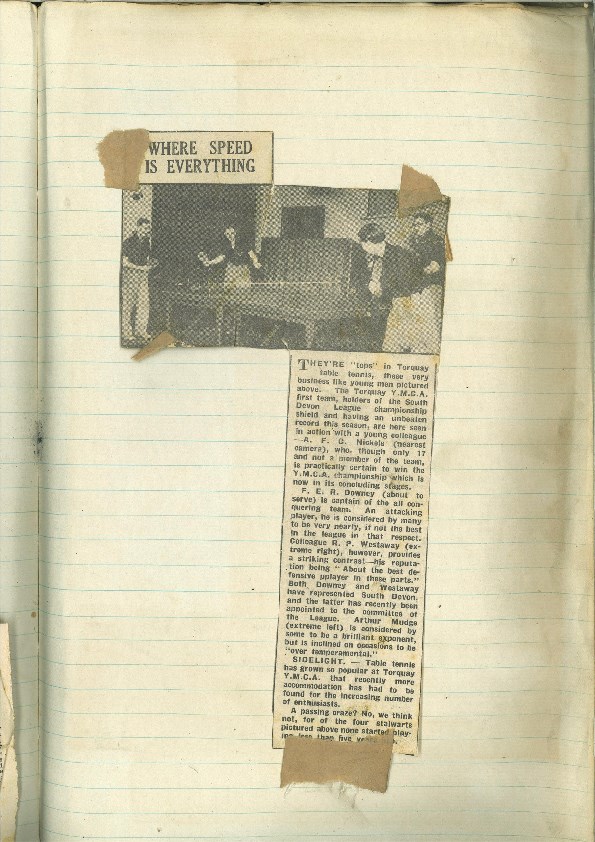 It is actually a photo and article about the Torquay YMCA team that won division 1 but Nickels was the fourth player in the picture, he is the one nearest the camera.

As a postscript to this the scrapbook contains clippings from the start of the 1939-1940 season but with the outbreak of the war the  season was abandoned and the clippings stopped.  Aubrey Nickels served in the RAF during the war and when it was over he played a couple more years in the South Devon League when it restarted.  He trained as a teacher and moved to Newmarket then Lowestoft where he was active in the local leagues and at county level but as far as I know he never played in the South Devon League again.  He passed away a couple of years ago aged 94.

Some of the scans of the newspaper clippings haven't come out very well and the images are difficult to read; I still have the scrapbook so if anyone wants to have a look at it please let me know.

If you are curious to know what a table tennis game looked like in those days I have found some old footage from the era here:

I picked out this footage in particular because at around 3:13 there is a short clip of two women playing and I understand that one of them is the aforementioned Betty Blackbourn, although I don't know which.
Author: David Davies via South Devon and Torbay Table Tennis League
Article Published: Monday 16th July 2018
Last Updated: Friday 20th July 2018