A cracking game to kick start the report for week 13 between Brand Identity A and Hadleigh Forum A. It was a game that saw the rare occurrence of all players winning at least one game with the Forum just coming out on top 5-4 due to two wins a piece from Hamish Innes and Dave Bassett.

Hullbridge B picked up a good win against Rayleigh Mill as Daniel Zeffie, Paul Brown and Norbert Fullerton all got the better of the two Steve’s (Sawyer & Maltby). The match finished 6-3 as none of the Hullbridge trip could get the better of man of the match Colin Chatfield.

Warehouse B were in impressive form this week as Mark and Simon Rudland and Berti Makolli teamed up to beat Stanford le Hope 8-1. Andrew Paton with the consolation win over Makolli.

Hullbridge C came up against last year’s champs Thorpe Bay A this week in a 7-2 win for the Bay. Paul Sayer the only man unbeaten as Gary and Daniel Young got the better of Paul Whatton and Mark Stones respectively.

Elsewhere there was another 7-2 victory, this time for the other Thorpe Bay team. The B team beat a Rawreth B team of Mike Hayes, Bruce Kettle and Tim Cramphorn by that margin, with Bruce Kettle the star for Hullbridge as he picked up good wins against Kieran Skeggs and Gurj Bhambra. Not even Kettle could get the better of man of the match Liam Squirrel who continues to go from strength to strength in the top flight.

And finally, from the premier division, 2017 champs Hullbridge A suffered a shock defeat to Hockley A. Hockley’s cause helped by two walkover victories which I can only imagine was down to an injury and two good wins for Chris Ballard over Stuart Gibbs and Dave Bowles and a fine win for Ian Wall over Richard Brown. 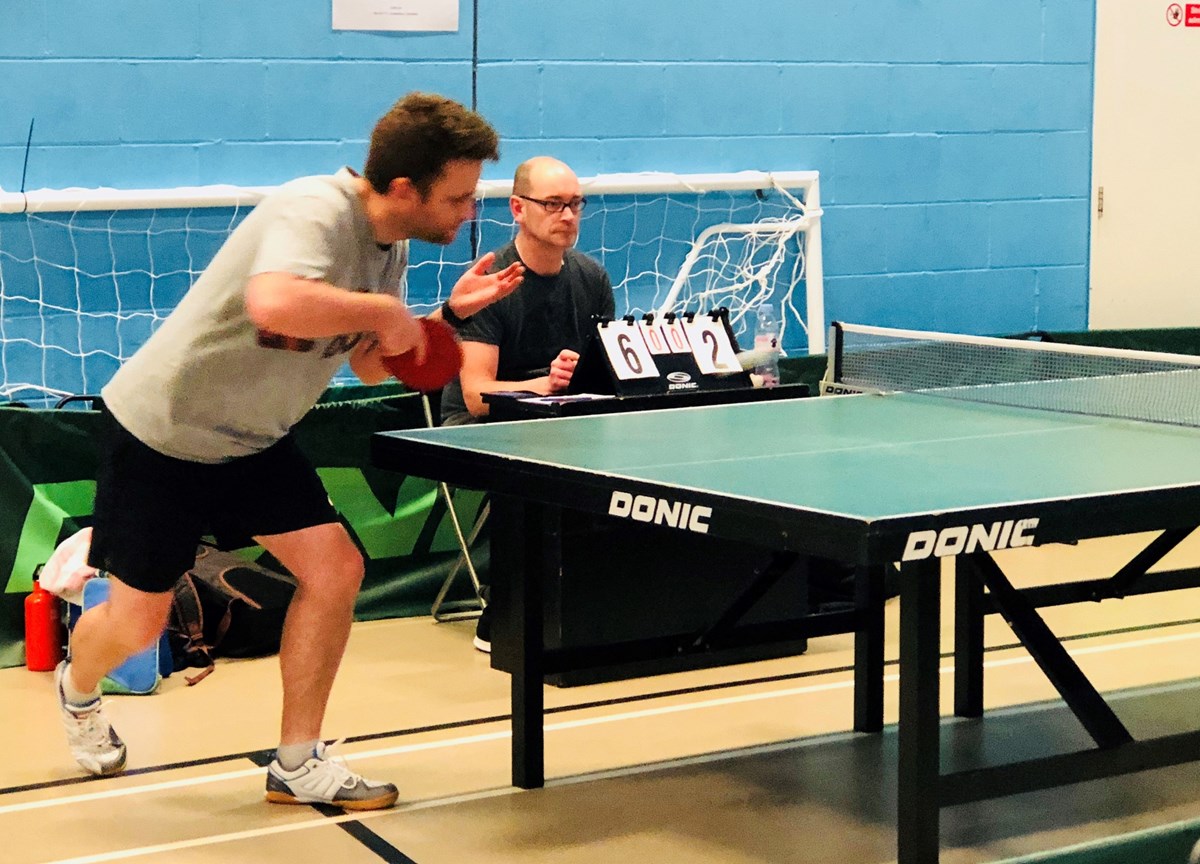 Leaders Lentern A won 7-2 this week against RESSC to leave them 12 points clear at the top and in a dominant position at the halfway stage. With a strong squad, it was left to Peter Cranmer to step up to the plate this week with an unbeaten match, although was taken to 5 sets in two of his matches. Elaine Sayer and Rasmus Stokholm provided the support with two wins each. Kevin Smart played well to take the two points for RESSC, including inflicting only Elaine’s third loss this year.

Hockley B are still in second placed but were hard-pushed in a close 5-4 win over Hullbridge E. Dave Colwill and Alex Barnetson scored two each with Stuart Adshead adding the final point. None of them could overcome Ben Matthews from the Hullbridge team who ended up unbeaten on the night. Matt Rolfe added the final point for Hullbridge.

Hadleigh Forum B sit in third but are being hard-pressed by Invicta. Hadleigh won 6-3 this week against Brand Identity B. A Tony Jacks hat-trick was the backbone of the victory for Hadleigh Forum 'B'. He was ably supported by Mick Tippenden with 2 wins and John Tendler with 1 win, but neither of these experienced players could overcome David Jacob who was the best player on the night for the away side. Mick Grout added their third point. No luck on the night for Sean McNabb.

Customs A position was boosted with a walkover 9-0 win against Rawreth D who were unable to field a side.

Canvey A had a close 5-4 win over Lentern B, in a match where no-one was unbeaten. Peter Cray and Andrew Murray for Canvey scored two points each, while Pat White and Peter Lucraft matched them for Lentern. It was left for Ray Wilson to snatch the final point to give Canvey victory. The final Match between Sue Body and Andrew Murray was  tense with the scores locked at 4-4, with Andrew grabbing the win in the fifth set by 11-9.

Rawreth C are still scatching for points towards the bottom of the table and just came up short in a good match against Hullbridge D, who won 5-4. Garry Hartgrove played well to remain unbeaten for Rawreth, with Lin Roff and Charles Yeung taking two each for Hullbridge. Rod Maclennan added the final point with Colin Clements doing the same for Rawreth, with John Blackman unable to influence the game.

There was one result still to be sent in at the time of writing. (Hockley C v Invicta A)

Surprise of the week was the previously-unbeaten Hadleigh Forum’s Paul Fawell going down in five sets to Runnymede’s Tina Hutchinson. I guess it goes to prove Paul’s human after all! Thanks to maximums from Mark Everard and Tony Mace, Forum were otherwise untroubled in an 8 – 1 away success.

A hat trick from veteran Jan Thorpe was not enough to save Rawreth E as they went down 5 – 4 in an entertaining bottom of the table clash away to Canvey B. Canvey’s spirited team success came courtesy of two each from Des Duffield and Tony Molisso, with Steve Robinson chipping in with a single victory. Both these latter players were playing up from their normal C team berths. Mitchell Nunn got Rawreth’s other point.

A Brian Parker treble gave Stanford Le Hope B a 6 – 3 triumph over visiting Invicta B. He was ably assisted with two from John Handscombe and one from Chris Crooks. Neil Daines was Invicta’s best player recording two of his side’s three wins.

Mixed fortunes all round in the encounter between Brand Identity C and Hockley D. The home side’s Jenne Seibolt and Richard Riebold managed two wins, with Dave Humphreys adding another to give the home side a narrow 5 – 4 win. Visiting Hockley’s Gary Linzell also managed two victories, whilst his colleagues David Cross and Brain Bissenden added one each.

Canvey ensured it was a bad week for all the division’s Rawreth teams, edging a close away match at Rawreth G. Although experienced Rawreth player Andy Deadman was adjudged player of the match, his two wins were not enough to save his side. Two wins each for Tony Molisso (playing for the second time this week) and Joanne Hills with one win from Steve Robinson (also playing for the second time) gave Canvey a 5 – 4 victory. Rob Wood also gained two wins for the home side.

It was a night of big scores down at Hockley but whilst one result may have been predictable the other one certainly was not.

Previous table toppers Customs B had no problem disposing of Hockley F 9-0 and in doing so returned to the top of the table and they now hold a four point advantage over second placed Hockley E.They were the other big winners on the night beating current league leaders Hullbridge G 8-1.

Customs fielded a strong side in Dean Johnson, Mark Rose and Amar Al-Soufi and lost only one set all night. Hockley F saw Benedict Brown make his debut but that was the only positive for them on the night and they slip to the bottom of the table.

Hockley E had to fight hard against Hullbridge with four matches going to five sets of which three featured  2-0 deficits being overturned. Ben Cook and Alan Tideswell both recorded hat tricks and whilst it was fairly plain sailing for Alan, Ben took five sets to defeat Andy Roff, and then produced a comeback against Lindsey Johnson-Farge winning 11-8 in the decider. Andrew Strutt provided the other two wins producing his own comeback against Lindsey to win in five but then losing the same way against Andy to  give Hullbridge their consolation point.

The two Stanford teams, C and D, produced what might have been expected – a see saw match finishing 5-4 to the C team and decided on the last match of the evening. The C team started well going 1-0 up but never led again until that final match. With Christmas fast approaching, somewhat appropriately Martin Winter was the star that shone brightly on the night winning his three and only dropping one set. Max Russell provided the other two points but there was no joy for  Bradley Bond. Tony Papasifakis got a brace for the D team with Mark Farley and Vaughan Chambers adding one apiece.

Invicta C kept the pressure on the leading pack defeating Hockley G 6-3 but nobody could defeat Tubby Henlen who won all three without dropping a set and maintained his 100% record in the league. The home team of Trisha Winter, Keith Baxter and Jon Gould all recorded braces so Hockley’s John George and Keith Denyer both returned home empty handed. Invicta are four points behind Hullbridge G and Hockley E who are third and second in the table.

The youngsters of Hullbridge H continue to make progress up the table and confidently brushed aside Warehouse D 8-1. Hat tricks for Joey Page and Ben Cannon and two for Josh Jones gave them the points whilst Graham Back provided the only joy for Warehouse overcoming Josh in four sets.

Player of the Week – Paul Henlen

Team of the Week – Hockley E
Report from Paul Strutt