It seems we have a two-horse race at the top of the Premier division with just two points separating Rawreth A and Thorpe Bay A. This week gave no further indication on the destination of the title as both sides recorded convincing 9-0 wins over Brand Identity A and Warehouse A respectively. Rawreth went closest to dropping points as Brand Identity’s Richard Jackman pushed Steve Tilson and Ben Warner to a 5th end.

In their pursuit of the top two Hullbridge A only dropped one point as they beat Warehouse B 8-1 with Stuart Gibbs and Richard Brown winning all their games and Dave Bowles just being denied his hattrick by Martin West.

The final two games last week finished 6-3 which saw wins for Hockley A and Rawreth B. Rawreth B beat a Rayleigh Mill side, for who Peter Radford won two but even the hard-hitting Peter, currently the number 1 in England in his age group, couldn’t get the better of the young(ish) Matt Spero (in photo below) who took the man of the match award with his three wins. The star for Hockley was Matt Stringer who won all his games while Harry Keys (2 wins) and Daniel Zeffie with a good win over Chris Ballard were the Hullbridge point scorers. 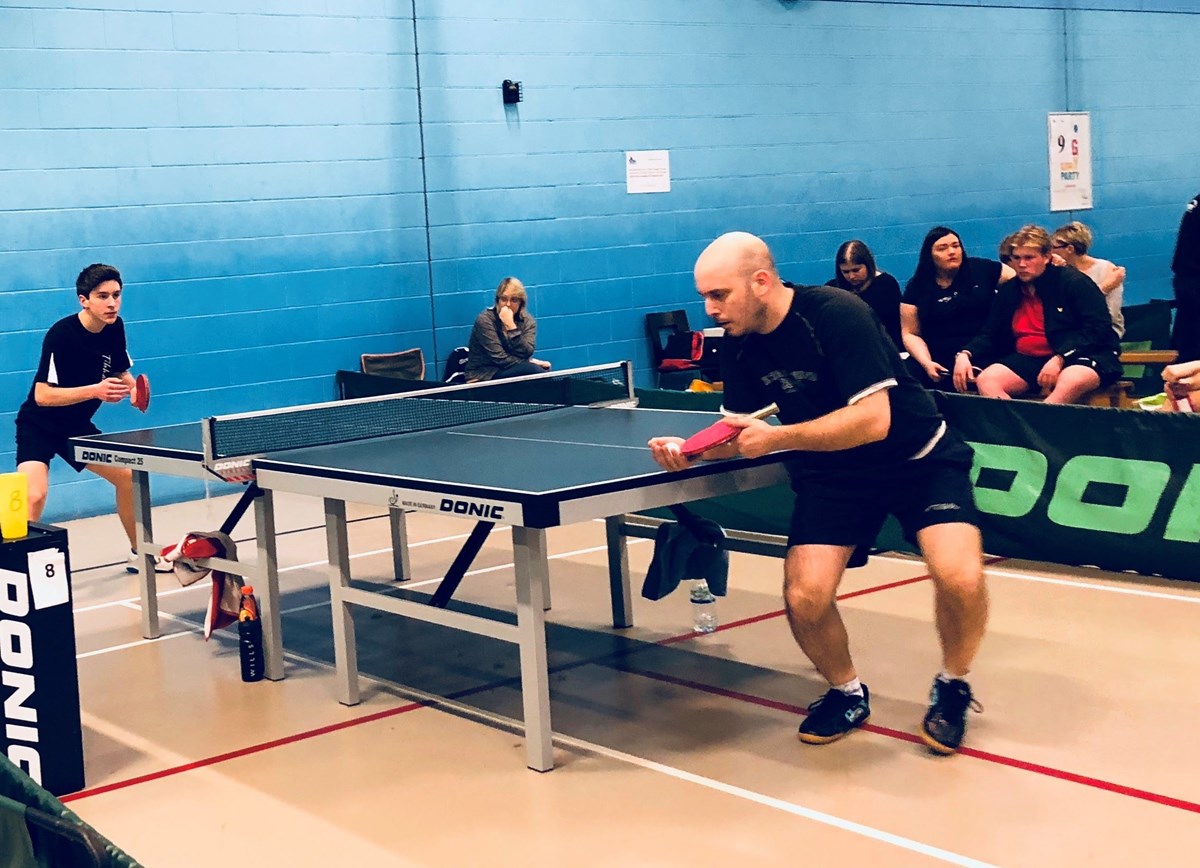 Lentern A march on at the top of the table, with a convincing 7-2 win over Invicta A and now lead by 20 points. An impressive performance from John Lott and Elaine Sayer who were both unbeaten were supplemented by an additional point from Steve Barker. Steve Marr and Mike Piper were the ones to take the games from Steve, with Tony Ayliffe just falling short.

Hockley B are keeping up the pressure but were pushed all the way in a close 5-4 win against Canvey A in a match where no-one was unbeaten and could have gone either way. This looked to be far from the case at the halfway stage when Canvey trailed by 4-1, but then took 3 of the next 4 games, unluckily losing the other one in 5 sets. Alex Barnetson and Dave Colwill scored two each with Stuart Adshead adding that final point in the important second half game against Peter Cray. Andy Murray and Ray Wilson played well to score two each for the Canvey side.

Hadleigh Forum B returned to winning ways with a 6-3 win over Hullbridge D. Tony Jacks led the way with an unbeaten hat trick supported by two from Dave Woolmer and one from Mick Tappendem. For the Hullbridge team, Charles Yeung, Lin Roff and Dawn Baldry all scored a point each, leaving them in 4th place just behind Hadleigh but level on points with Invicta.

Customs A also won by the same margin, 6-3, against Lentern B. Roy Thomas led the attack unbeaten on the night, with Brian Rackham adding two and Dale Gutteridge one to make up the total. For Lentern, Pat White performed well to take two games, unluckily losing to Roy despite being 2-1 up, with Wayne Farmer adding the final point.

Rawreth C continue the good start to 2019 with a 4th win on the bounce, this time by 7-2 against RESSC. Gary Hartgrove and Colin Clements were the main contributors, each winning their three games, with Gary McCarthy adding the last point. For RESSC, Kevin Smart and Ron Coutts added the points with an injured Mike Worship, having to concede the final game.

Brand Identity B were unable to raise a team this week so forfeited the points to Hullbridge E.

Finally, the bottom two clubs met, with Hockley C losing the game 5-4 against Rawreth D to record only their third win of the campaign. Simon Neale, playing in only his second game this season, was unbeaten with three wins for Rawreth, and supported by Sam Thompson and Colin Barham with one each. For Hockley, Keith Abbott top scored with two wins, with one each for Callum Turner and Joe Locke.

A Jonathan Allen hat trick inspired Warehouse C to a 5 – 4 victory over Canvey C. It wasn’t plain sailing for Jonathan though, with two of his three matches going to five sets. Graham Back, yet again playing up to help out, and regular Simon Lisner, each added a single win to Warehouse’s score. Steve Robinson and Joanna Hills each got two for the visitors.

The Hadleigh Forum C juggernaut goes rolling on. This time Rawreth E were on the end of a 7 – 2 away defeat at Forum’s hands. Paul Fawell again was Player of the Match with a maximum, whilst Satwant Gill and Graham Farmer each chipped in with two successes. Botond Mezo, again playing up for Rawreth, turned in a cracking performance to take both his side’s points. There seems only the question of whether or not Forum can go unbeaten throughout the whole of this season to be decided – promotion must surely be a formality?

The young fitness and fresh coaching of Hullbridge F came out second best to the age and experience of visitors Invicta B. Veteran Barrie Murphy won all his games, whilst Mike Keeble and David Barnes piled on the misery for Hullbridge with two wins apiece. Ben Hoskins and Dan Mansfield each had one success for the home team.

In a setback for Wakering’s promotion hopes, they were only able to field two players for their away match at Rawreth G. The home side took full advantage, winning 6 – 3. Paul England salvaged a couple of wins for Wakering and Nigel Cook added another.

Visiting Hockley D were treated very well at Canvey B, coming away with a 6 – 3 win, courtesy of two victories for all three of their players – Dave Chenery, Dave Cross and Paul Strutt. Tony Westwell was the least generous of the home side, managing to win two, whilst Lee McGonagle got the other home point.

Rawreth F were on the receiving end of one of Dmitry Kisil’s rare appearances for Runnymede. Dmitry hasn’t lost in all the four previous fixtures he has started this season, and things were no different this time around. Tony Coeshall added two victories, and Barbara Shead one, in a comfortable 6 – 3 home win. Botond Mezo was again Rawreth’s star with two wins, whilst a special mention should be made of the improving Rawreth youngster Harrison Creak who recorded one success.

Customs B roared back into action this week beating Rawreth H 7-2 and going back to the top of the table six points clear of Hockley E. Their lead may not be as big as this as the quirks of the fixture list unwind as Invicta C, currently in sixth place and eleven points behind, have two games in hand in hand.

The Taxmen were not too bothered in their match against Rawreth however, Mark Rose picked up a perfect hat trick not losing a set and Richard Kidd also got a maximum including a four set revenge win against his daughter Emily, who he had lost to in the reverse fixture. Alex Clark had to come back from 2-1 down to overcome Harry Watson in five sets and claim the other point. Emily and Jake Nelson earned a point each for beating Alex.

Closest result of the week was Canvey D’s 5-4 win against Warehouse D. The match was evenly poised at 2-2 before the Islanders won three on the trot only for Warehouse to win the last two games. Geoff Banthorpe and Simon Baker shared the honours for Canvey with two wins each with Ray Baker grabbing the final point. For Warehouse Steve Higgins and Graham Back also won two each. Graham featured in all the three matches that went to five sets just missing out on a hat trick after an intense battle against Geoff who conceded a two set lead before coming through 11/8 11/6 9/11 10/12 12/10.

Stanford Le Hope D moved into third place with a 7-2 victory over Hullbridge H but the score could have been a lot closer as no less than four games went to five sets. Sami Hughes scored a perfect hat trick with Mark Farley also getting a maximum and Mandy Till supplying the other point. Katie Tanner got a point for Hullbridge by beating Mandy in five sets and Charlie Bartlett picked up his first win in the league beating Mandy in four.

Stanford’s C team also won to go fourth in the table with a 6-3 win against Hullbridge G. Mark Downey and Max Russell both won their three matches but there was no joy for Peter Moxham. Max had to work a little bit harder than Mark for his hat trick coming back from two sets down against Sue Reece and all the Hullbridge team of Sue, Bob Shingleton-Smith and Ann Lane claimed their points from Peter. Hullbridge stay on the fringe of the promotion race in fifth place just one point behind Stanford.

Bottom club Hockley F didn’t get too much joy against their own G team losing 7-2. They didn’t start too badly trailing 3-2 at the halfway point but then proceeded to lose the next four games without winning a set. Aaryan Vatsa and Roger Sherman both won all their matches whilst Rajat Negi picked up his second win in his second match for the G team. Graham Gregory and Alwine Jarvis got a point each for Hockley F.

Player of the Week – Mark Downey