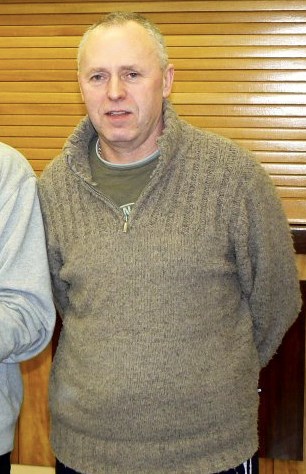 Alan Cotton in his youth

Snitterfield brought the season to a thrilling conclusion with a 7-3 victory over table topping Colebridge Pasties to finish level with them at the top of Division 1 on 141 points. Pasties drew first blood when Nathaniel Saunders, displaying a maturity way beyond his years, overcame the hosts’ captain John Price, although Alan Cotton immediately restored parity. Snitterfield then edged home in two exciting five set encounters with Clive Irwin finally taking the honours 17-15 in the decider against Mike Evetts, and Cotton putting aside loss of the first two ends to defeat Saunders. In yet another marathon contest John Taylor reduced the deficit with a 13-11 fifth set victory over Price, before Cotton completed his treble and then partnered Irwin in the doubles where the pair squandered a two set advantage but came good in the final end. Saunders responded by earning his second victory, only for Price to take the match score to 6-3 and set up a crucial last game where Irwin defeated Taylor to give Snitterfield their vital seventh score.

Although league rules provide for a playoff in such circumstances the two teams have agreed to share the title. Snitterfield captain John Price commented ‘It is a fantastic result for us given that Pasties have been top most of the season’ while his opposite number Mike Evetts added ‘My congratulations to Snitterfield , who provided an exciting finish to the season, and ensured that the title winner was still to be contested in the last game of the final league match’.
Reigning champions Shottery A finished 23 points behind in third place despite ending their campaign with a 7-3 defeat at JLM Hussars. The hosts brought in Alex Emms and Luke Moffat who swept all before them, although the latter was taken to deciders by Martyn Langston and Gary Stewart who, together with Graham Poole, each earned a point for the villagers.
Shottery B also won 7-3 with Steve Smith and Awais Muhammed securing both their games as they overcame JLM Cavaliers who were only able to field two players. In the only encounter to go the full distance Muhammed and Tim Fell lost out in the fifth end of the doubles to Joe Cull and Dave Bevington who both added a further score.
Division 2 champions Henley B signed off with a 9-1 victory at Tanworth Taipans. Andy Rowland and Tony Seymour recorded trebles, and Richard Grover contributed a brace but was unable to overcome Mick Welsh who thereby ensured the hosts avoided the whitewash.
Henley’s A team were also 9-1 winners at Veterans. Peter Quince and Nigel Payne were undefeated, although the latter was involved in five set contests with Peter Rodwell and Neil Mudie. It was Mudie who registered Veterans’ only score by overcoming visiting captain Geoff Shephard who went home with a brace.
Blazing Paddles wrapped up their season with an 8-2 success at Ashorne. Nello Mauri and Chris Dickens were unbeaten, despite being taken the full distance in the doubles by Roger Pye and Jim Jack. Wilf Chan added Paddles’ other score but narrowly lost out to Pye and Mark Bridgeman.
Author: Mike Evetts via Stratford-upon-Avon Table Tennis League
Article Published: Sunday 7th April 2019
Last Updated: Friday 12th April 2019