The Gerald Furniss Memorial Tournament is a tribute to one of the league's most memorable characters.  Gerald died in 1988 having been taken ill whilst playing a match for Blakesley club. This tournament has been staged annually since the 1989-90 season and is a handicap event for players in Divisions 2 and 3.

Congratulations go to Jack King of Daventry Bees who managed to defend his title successfully this year and become only the 4th player (after Reg Dick, Nick Howard and Matt Woollard) to do so since the tournament's inauguration 30 years ago. He also kept alive Daventry Club's remarkable six-year winning run in this event.
This competition always attracts a good number of entries and there is no other one locally where the participants are able to play against so many different people over the two evenings, with the handicap system ensuring that each game is played on a relatively even basis.  Each entrant was able to compete against 10 other players before the knock out stage, and yet again so many matches were decided by only 1 or 2 points, with some even ending in a draw.
After the initial stages Jay Jayasundara (Towcester D) became the top seed going into the quarter final knockouts, beating Steve Israel (Yardley Gobion Eagles) before narrowly losing to Jack in the Semi-final 27-33. Jack had won his quarter final beating his clubmate Bob Read from Daventry Dees.
Martin Sismey (Rothersthorpe) qualified as 2nd seed but lost out 30-33 in his very close quarter final to Mike Perry (Towcester D). Mike’s opponent in the semis was Ray Wood (Yardley Gobion Dogs) who beat Robert Yates (Towcester D) by the same score 33-30.
After 3 sets, the semi final between Mike and Ray was all square at 33 points each, and Ray managed to squeeze through after an additional deciding set.
Jack had to give Ray points in the final, and after 2 sets there was only 1 point between them. However, the last set proved decisive for Jack, and it's his name that will be on the trophy again this year.
As always, the matches were played competitively but in good spirits and everyone enjoyed the opportunity to play against so many varied styles and standards.

My thanks to everyone who came along and helped to make the competition so successful. 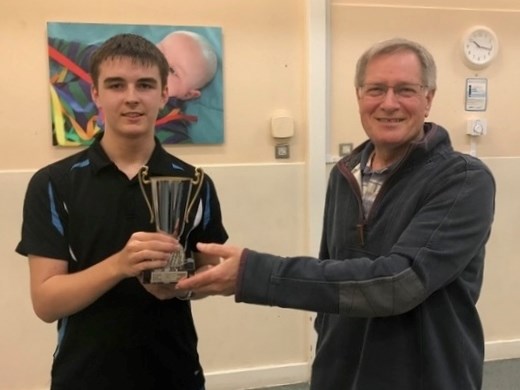 The eagerly anticipated Gerald Furniss Memorial Handicap Trophy was played over two Friday evenings at Towcester and included several new faces this year. The competition provides the opportunity for Division Two and Three players to play each other on a comparative basis due to the handicap system. As always, the games were played in a competitive but friendly spirit.

This year, each player was able to play against 10 different players with many matches being won by only 1 or 2 points - there were even a couple of draws! Once the “round robin” had been completed each player was seeded based on their results. Jack King (Daventry Dees) became top seed with Ken Sawyer (Towcester C) 2nd seed, Alan Thompson (Daventry Dees) 3rd, and Paul Wragg (Yardley Gobion Dogs) 4th going into the knock-out stage.

On paper, these 4 were due to make it through to the Semi-finals, but only Jack survived.  Mike Perry (Towcester C) knocked out Paul in their quarter final despite having to give away a handicap of 19 points. Alan was beaten in his quarter final by Jaya Jayasundara who was in such inspired form on the second Friday that Alan suggested Jaya’s canned drink of 'Ginger Beer' should be tested!

The third quarter final saw Phillip Kibble (Rothersthorpe) knocking out 2nd seed Ken in a match that was only decided in the last few points of the final game. The remaining quarter final proved to be the closest and although he had a handicap of +21, Jack only just managed to keep ahead of Cadoc Whiteley (Towcester D) eventually winning 35-33

So to the semis which were both very close. Jack v Mike saw Jack edge through 35-32 and this could easily have gone either way, with the last set of 11-10 to Jack making all the difference. The other semi was even closer with Phillip squeezing past Jaya 33-31.

The final between Jack and Phillip produced some excellent rallies, but in the end, Jack proved too strong and has become this year’s winner. Congratulations to Jack, and also Phillip as runner-up and a big thank you from me to all those who competed and made the contest fun and exciting.

League President Rod Barr was on hand to present Jack with the winner's trophy, making it a remarkable five consecutive years that a Daventry player has triumphed in this competition.

An excellent turn out once again for the event organized by David Howard at Towcester Club and played exclusively by the league's 2nd and 3rd Division players in a competitive but friendly spirit. The same handicap system as used in the Knock-out cup ensured that players of all standards were able to play each other on a fairly even scale, and this was highlighted when several matches ended in a draw or were won by a single point.

Everyone involved was able to play 8 other players with 2 points for a win, and 1 point for a draw with the top 4 players meeting in the semi finals. Jack King went into the semis undefeated, Bob Read went through on 12 points, Ken Sawyer on 11, and there was a 3-way tie on 10 points to decide on the last place. Veronica Downing had 4 wins and 2 draws, but Roy Smyth and Frances Dickson both had 5 wins each. The last place was decided on who had won their previous head to head, and as Frances had already beaten Roy, she made up the 4th semi-final place.

The semis had the “more mature” players up against each other with Ken coming through victorious against Bob. Frances proved too strong for her Daventry teammate Jack but there were some excellent rallies from the pair, and as there was only a handicap of +1 in favour of Frances, this was always looking to be a close match.

So to the final which saw Frances start off with a +16 handicap against Ken.  Both of them had been playing well throughout the tournament, so despite what seemed on paper to be a large handicap in favour of Frances, it was really too hard to predict. Ken won the first game 11-3 and the second 11-5. The final game (everyone plays 3 games per match regardless of who wins the first 2) was much closer all the way though, 5-5, 6-6, 7-7 but ultimately Frances managed to take the game 11-9 meaning that with an overall final score of 35 -31, it’s Frances Dickson who is the 2017 Gerald Furniss Champion!

Seventeen players from the Daventry, Towcester and Yardley Gobion clubs competed in the competition organized by Martin Pringuer and played at the Towcester Club over two Fridays in May. In the first round which was fiercely competed, everyone played 8 games against players with a range of handicaps. Everyone won at least one game, with some very close finishes. The four highest points scorers then proceeded to knock-out semi finals. The final was contested between Josh Adams of Daventry and Paul Jackson of Yardley Gobion. Josh, giving Paul a handicap of 6 points, won convincingly 11-2, 11-7, 11-10. Josh’s performance throughout the competition had been outstanding having won every game he had played.

Seventeen players competed in the competition organized by Martin Pringuer and played at Towcester Club over two Fridays in April. In the first round which was fiercely competed, everyone played 6 games against players with a range of handicaps. The eight highest points scorers then proceeded to knock-out quarter and semi finals. The final turned out to be a closely fought match with Ben Gatward and John Osborne (both of Daventry) starting on scratch, as no handicap accrued to either player.

Organized by Martin Pringuer and played at Towcester Club where 20 players competed in 4 groups. Congratulations to Daventry's Frances Dickson who won the event by beating last year's champion Ray Wood.

Organized by Tony Woodward and played at Towcester Club where a dozen players competed in three groups. Group winners were Mike Perry, Ray Wood and Jaya Jayasundara who played each other to determine final placings.

Our league has been successfully organising local table tennis set mainly in village clubs for more than 40 years and has an enviable reputation for friendly competition with a strong social element. We cater for players of all standards and would be very happy to hear from you if you would like a game.

You will find an up-to-date results service here during the playing season and new pages and links can be added so let me know if there is something you would particularly like to see.