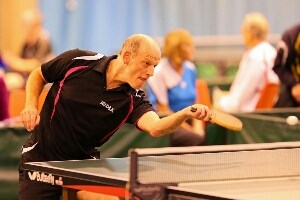 Adrian Pilgrim undefeated playing at No 1

The squad of Adrian Pilgrim, Matt Outhwaite, Ryan Stockham, Rachel Pilgrim and Dawn Sagoo were untroubled in the main beating both Derby and Northumberland 2 by 10-0 and Staffordshire and South Yorkshire 2 by 9-1 in both cases Ryan dropping just the one game.

The big match as usual was Northumberland 1 who have pipped us to the division many times in the past.

Warwickshire went one behind as Andrew Wilkinson defeated Matt Outhwaite in the first  individual match but 7 unanswered matches, 2 from Adrian and 2 from Dawn plus 1 from the other three settled the match and defeats for Rachel and Ryan in the final two matches were just a consolation for Northumberland