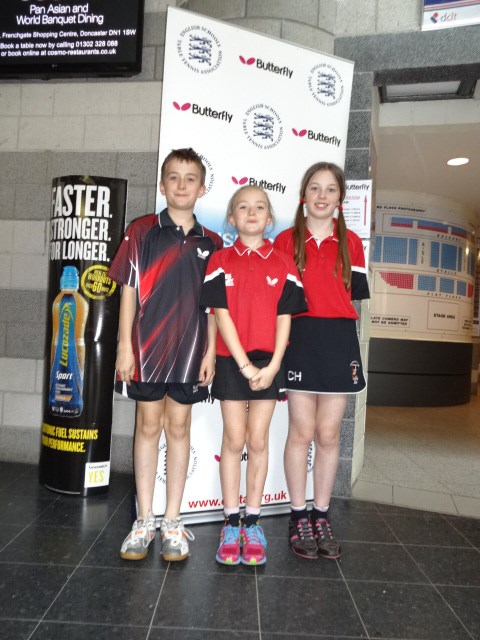 On Saturday 26th April; nine players from Warwickshire competed in the ESTTA Individual National Championships at the Doncaster Dome. This is the largest single day junior table tennis event in the annual calendar.

The male representatives included Alex Bowe (Under 11 Boys); Jack Green (Under 13 Boys); Timmy Cooper (Under 16 Boys); Jesse Kendrick-Hill (Under 19 Boys). Additionally Sam Weaving whose school is in Oxfordshire competed in the Under 16 Boys. The female representatives included Milly Green (Under 11 Girls); Ciara Hancox (Under 13 Girls); Lisa Rinnhofer (Under 16 Girls); and Olivia Fletcher (Under 19 Girls).

It was a great to see all the players working so hard in their different events. Top performers included Jesse and Timmy who both finished runners up in their respective groups and qualified for the knock out stages. Jesse then lost to Daniel McTiernan; whilst Timmy progressed one better beating Lewis Acton 3-0, before losing to eventual Under 16 Champion Tom Jarvis (7-11, 4-11, 13-15) in the Last 16. Jack won one match in his group; and Alex gained some valuable match experience in his first National tournament. Sam won two matches and lost two matches, so finished his group in 3rd place.

Milly finished third in her group (winning two matches and losing two); missing out on second place by count back. Ciara won one out of four matches. Lisa gained some great experience against some tough opponents including eventual losing semi-finalist Kate Nixon from Yorkshire, and then only losing in 5 sets to Hannah Clarke from Cleveland who recently played in the World Schools Championships in the Schools Team Event. Olivia won one match out of three, losing the two matches in 4 close sets.

All players participated with great enthusiasm, and it was a delight to see them encouraging one another when they weren't playing. Well done.