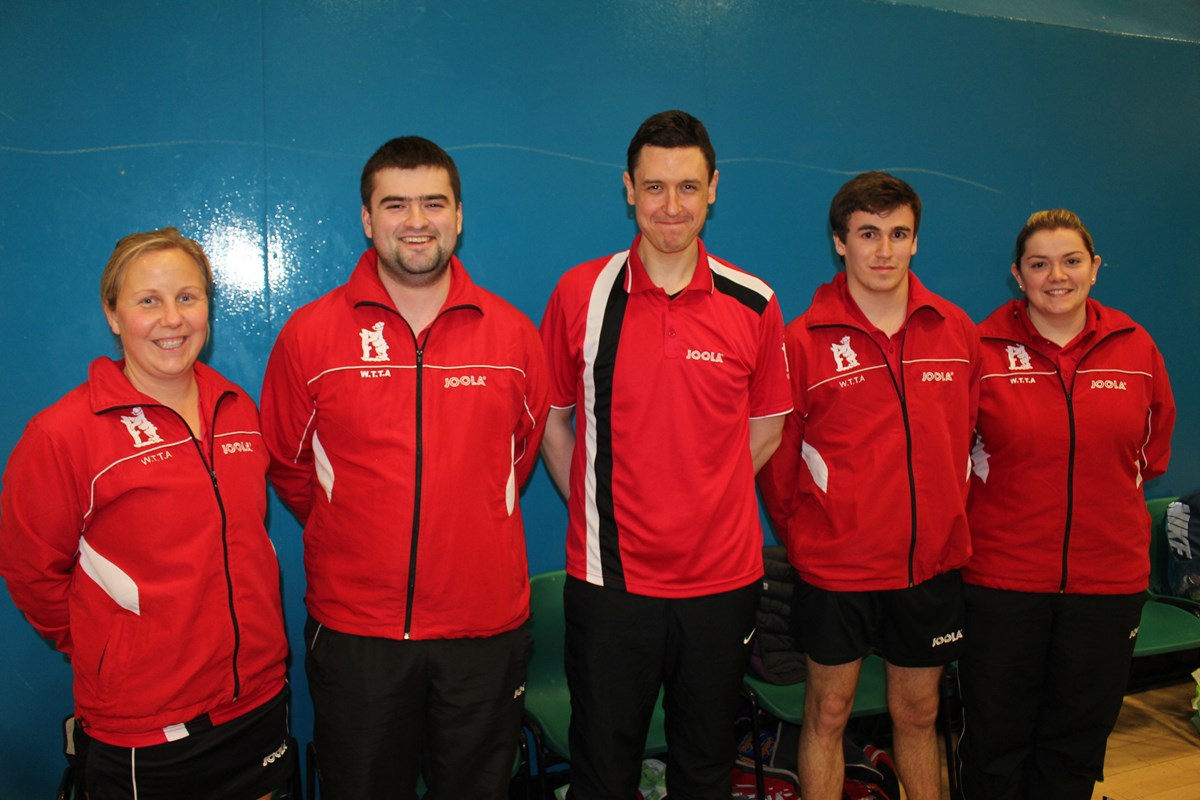 Warwickshire Senior first team pulled off mission impossible at the County Premiership Championships last weekend following a number of spectacular individual performances and a team ethic that was sadly lacking in the first weekend back in December 2015.

Unlike the first round of matches where Warwickshire had failed to gain a single point despite some excellent efforts from the majority of the players and some incredibly close results (a 7-3 and two 6-4 losses to Derbyshire, Middlesex and Nottinghamshire respectively) the team decided it was time to pull together and try and manage the great escape having worked so hard the previous year in order to gain promotion to the County’s elite division.

With Kenny Lindsay brought in to replace the former Warwickshire number 1 Loz Sweeney, there was a sense of hope before a single ball was even hit, safe in the knowledge that everyone would at the very least give 100%.

Saturday morning saw Warwickshire gain their first piece of good luck when opponents Berkshire failed to field a single female player, thus giving the Bears a 4-0 lead effectively.  Kenny Lindsay started proceedings with a hard fought 3-0 win over Dave Barr, a score line that James Ward was to replicate immediately afterwards when he outclassed Hari Gehlot to give Warwickshire their first win in the Premiership and start the survival ball rolling.

Matt Outhwaite was unlucky to lose a close fought contest 3-1 against highly ranked England player Liam McTiernan, before James Ward suffered a surprise 3-0 loss to a resurgent Dave Barr, who had changed his bat from his initial match and was far more aggressive against Ward than he was Lindsay.

Outhwaite then got his first win of the weekend with an excellent display against Gehlot, coming out on top 3-1.

The final match was the highly anticipated clash of the top two players from each side.  McTiernan vs Lindsay had the entire hall keeping a close eye on the match as the first two ends were just shaved by Lindsay.  However McTiernan isn’t ranked 35 in England for throwing in the towel.  His fighting characteristics saw him win the 3rd end and pose Lindsay a few questions.  However, all were answered as the Birmingham University student stepped up a gear to comfortably take the 4th end 11-5, playing far more aggressively from both wings, leaving McTiernan contemplating what could have been.

With an 8-2 victory, Warwickshire finally had some points on the board and off the bottom of the table.  Kenny Lindsay’s welcome return to the county side was justifiably rewarded with a player of the match performance and one that his adopted county were incredibly proud of.

The afternoon match saw a crucial bottom of the table clash against Kent, Warwickshire’s nemesis from a few seasons previously who had pipped the Bears to the post and gain promotion to the premiership.  Still licking their wounds, Warwickshire were determined to continue their momentum and were aware that this time there would be no favours like the Berkshire match.

Matt Outhwaite and James Ward got the Bears off to a flying start with 3-1 and 3-0 wins respectively to put Warwickshire into a 2-0 lead.  Up step Warwickshire’s star performer of the weekend; Kate Hughes, who after an understandably rusty start, comfortably beat Lorraine Perryman 3-0.  Lindsay then carried on from where he left off with a 3-0 destruction of Kent’s number 2 Andy Norwood, giving the Bears a perfect 4-0 lead.  Rachel Pilgrim then had the daunting task of taking on England ranked 24 women Jas Ould.  Despite a 3-1 loss, the signs were encouraging for Pilgrim and she had dusted off her County cobwebs having been unavailable for the first weekend.

Outhwaite then secured at least a point with a 3-0 victory before Pilgrim got off the mark herself with a tremendous 3-0 win of her own to give Warwickshire an unassailable lead and the crucial win.  However, with Warwickshire’s recent tradition of promotion and relegation going on countback, every point was still to be played for and  Lindsay maintained his 100% record, giving the Bears a 7-1 lead.

A sign of things to come was about to happen in the next match as the glamour tie, Ould vs Hughes was to set the tone for Kate’s remarkable weekend.  Having never beaten Ould previously, Kate never let that bother her as she raced into a 2-0 lead, 11-5, 11-5, no doubt shocking Ould who responded by winning the 3rd end 11-7.  However, Kate wasn’t to be denied her first win over Ould and calmly won the 4th end, despite the 11-9 score line, keeping her head and earning a player of the match award.

Ward’s indifferent form then continued, as he lost the final game of the match 3-1 to Norwood, who saved a bit of pride for Kent, as Warwickshire recorded their second 8-2 win of the championship and in doing so moved further from the bottom of the table and the dreaded relegation.

Sunday morning saw Warwickshire take on Sussex who were eventually to be crowned Premiership Champions.  A daunting task was made even harder as Sussex had drafted in England International Yolanda King and top Swedish player Martin Svenson.

Warwickshire’s new number 1 and star male player Kenny Lindsay got things started with an awesome display of both control and power to leave Svenson perplexed and wondering how he had lost 3-0 so comfortably having played so well himself.  James Ward then put Warwickshire into a surprise 2-0 lead with an emphatic 3-0 win over Dave Butler.  Yolanda King however was to immediately stamp her authority on the match as she cruised past Pilgrim, before what was perhaps the most entertaining match of the weekend, Matt Outhwaite losing 3-1 to fellow contemporary Jack Bennett.  Both Matt and Jack have now played each other in all three premiership categories they have so far been eligible to play in, cadet, junior and senior.

With the score level at 2-2, Kate Hughes was to then turn the tie firmly on its head as she somehow managed to beat Yuki Watt 13-11 in the fifth, having saved a total of three match points in the fourth end and a further two in the decider.  The young player from Sussex understandably despondent following the match, whereas Warwickshire’s number 1 woman was already focussing in on King!

Svenson vs Ward, Watt vs Pilgrim and Bennett vs Lindsay all then went the way of Sussex, who in the blink of an eye had turned a 3-2 deficit into a 5-3 lead and with it, Warwickshire’s hopes of staying in the premiership were once again diminishing in a matter of minutes.  Lindsay’s 100% record had gone and with Yolanda King up next for Kate, it seemed a win for Bears rivals was simply to be a formality.  Hughes however had other plans.........

Surprisingly Hughes took the first end against the England international but after being 7-1 and 8-3 up in the second, appeared to ‘choke’ somewhat at the thought of beating the England number 7, eventually losing the end 13-11.  It was at this point, Hughes would have been forgiven for letting her head drop, but to everyone’s surprise, she actually upped her game and took the 3rd end 11-8.  With the pressure now mounting on King, Warwickshire team captain Ian Ferguson calmly reassured Hughes to forget the score line and continue doing what she was doing; playing with a freedom not seen before and one that her hard work and tireless effort over the past 5 years for Warwickshire has seen her become an integral part of the County side.  In short, all her hard work and effort was paying off.

Hughes took the 4th end 11-6, leaving King with no answers to her powerful forehand attack and consistent controlled backhand play.  King, gracious in defeat, displaying the class expected of an international, congratulated Hughes on what was without doubt her finest every victory in her career to date and her second player of the match award that inevitably came with it.

With the score at 5-4 and the chance of the most unlikeliest of points, Warwickshire’s hopes then rested on the normally Mr. Reliable; Matthew Outhwaite.  However, with Matt being somewhat out of sorts, it was questionable knowing what Matt would show up. Warwickshire should never have worried as the Warwickshire University student made it look simple as he so often does when required.  A 3-0 victory; 5, 6 & 5, secured Warwickshire a vital point and one that could possibly keep the Bears in the Premiership.

Having finished before Kent and Devon, Warwickshire then had to suffer watching the final leg of their rivals match to see if they would be required to beat Devonshire, their final opponents in order to maintain Premiership status.  However, with Kent sealing a 5-5 draw against Devon, Warwickshire were safe, regardless of their final match result and could look forward to another year in the county Championships top division.

With the adrenalin having worn off and the ‘come down’ having commenced, Warwickshire could be forgiven for losing their final match 6-4 to Devon.  Victories for Lindsay, Hughes, Outhwaite and Ward, left Warwickshire just short of gaining points from all 4 of their final weekends fixtures.  Both team Captain Ian Ferguson and deputy Captain Mike Browne, were incredibly proud of the players and their achievement regardless of the disappointing final result.

However, the result that mattered most was the incredible team performance throughout the entire weekend.  Every player played their part in what was to be an awesome display of team spirit and effort.  Never once did the team let their heads drop and they fought valiantly for every point.  The result; Warwickshire are once again in the PREMIER LEAGUE!