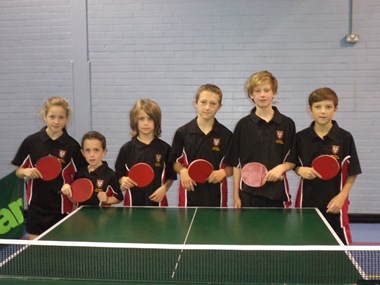 Worcestershire cadet under 15s, from the Evesham & District TTL travelled to Burton-on-Trent for the first set of fixtures in the National Cadet League competition this week.

It was a promising start which saw Evesham move to the top of Division 1 with victories over Stafford, Woodfield and Criftins TTC.

All three team members Alex Tomlinson, Craig Witheford and James Morrow finished the day with 100% records, each having beaten all 9 opponents faced.

Coaches Ewan McKay and Ken Baker also introduced some younger players to the competition through a development cadet team entered in Division 2.

On this occasion, the team was defeated in all 3 matches, but youngsters Ben Robinson, Lawrie Gough and Ella Morrow showed great potential and can play at this age level for years to come.