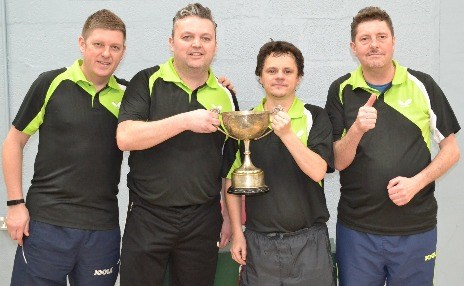 This final match didn’t disappoint as both teams battled it out, 5 setters being the rule not the exception. The overall match score was evenly balanced throughout this titanic contest, 1-0, 1-1, 1-2, 2-2, 3-2, and then 3-3. Last “rubber” of the match was Eastern Valley's Lee Thomas v Cardiff's Steve Buck and true to form this was won by 2 clear points in the 5th and final set by Lee to clinch the title for Eastern Valley by the narrowest margin.

The Eastern Valley squad that competed over the weekend was Lee Thomas, Mark Farrow, David Buck and Tony Collins. Mark Edmund from the 'C' side also 'played up' in one match.

The 'B' side squad of Andrew Ryder, Ray Goulding, Jonathan Allen and David Lloyd finished 5th in the Premier Division.