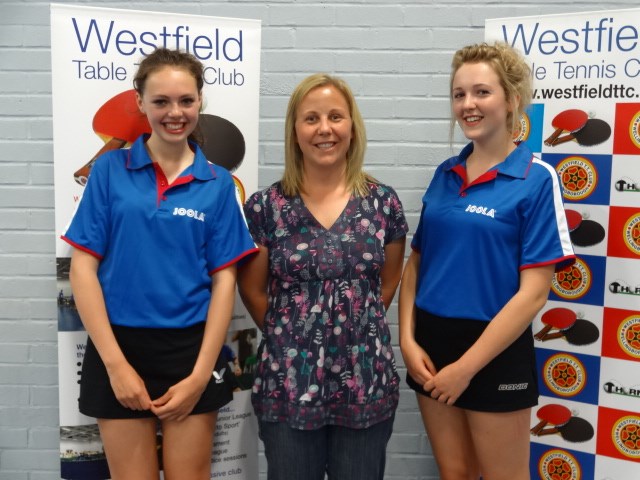 On Sunday 8th June, Milly Bradshaw and Olivia Fletcher represented Leamington Spa in the Bromfield Trophy Finals at Westfield Table Tennis Centre, Wellingborough. This event is  for the top junior girls’ league teams. It was the first time that Leamington had entered a team in this competition. One team had withdrawn last minute, which left 5 teams to battle it out in a round robin format.

Leamington played Bournemouth in their first match. Milly Bradshaw played first against top 10 Cadet Amy Blagborough. Despite Milly winning the second set, Amy’s experience and awkwardness with short pimples helped her through to win 3-1. Olivia Fletcher played Chloe Cass and demonstrated she was not afraid of playing in the higher level of competition. Olivia was victorious 11-4, 11-8, 13-11, to level the match at 1-1. As always the doubles is most crucial; and sadly Olivia and Milly lost out in a 5 set battle 14-12, 9-11, 11-3, 10-12, 11-7. Olivia lost 3-0 to Amy; and Milly lost 3-1 to Chloe in the reverse singles; leaving the match score as 4-1 to Bournemouth.

Leamington’s second match was against No. 1 seeds and favorites for the title Derby. Derby’s team comprised of top 10 junior Amy Humphreys and Latvian Diana Rusinova. Despite continual effort and hard work, the two Derby girls were too strong for the Leamington debutantes; losing 5-0. However, this was the same for all teams during the day against the favorites, who ended up winning the title.

Leamington played Hull in their third match. Hull’s team included Gauri Duhan, who had recently reached the semi-finals of the under 13 National Championships, and Alice Rice who was improving throughout the day becoming more consistent on the table. The Leamington girls were on the end of another 5-0 loss, however, Olivia won sets in both her singles; and Milly lost in 5 sets to Rice.

Leamington’s final match against Kettering followed a break where the girls, team Captain Kate Hughes, and mums (Tracey and Sarah) enjoyed some of the warm sunshine. For the first time in the day, Leamington won the coin toss and chose to be the home team. Olivia Fletcher was first up against top Junior Nicole Bird and lost 3-0. Milly Bradshaw (having loaded up on a Mars Bar) faced Sidney Wright. Milly had gradually got better during the day, moving her feet throughout and at the delight of Kate Hughes and the team bench, she secured her first singles win 11-7, 11-4, 11-6. The Leamington team were delighted to have leveled the match at 1-1. As had proven the case throughout the day, the doubles was going to be the crucial match. It was a topsy-turvy match, exchanging ends in the first 4 ends, with the 5th being very important. Despite a few rushed shots; Milly and Olivia held on to win 7-11, 12-10, 6-11, 11-5, 11-6 to give Leamington a 2-1 lead. Without adding additional pressure to the situation, Leamington were excited at the possibility of winning their first match, if Olivia could repeat Milly’s win against Sidney Wright. This was exactly what Olivia did, winning 11-7, 11-8, 11-8, to the elation of the Kate, Tracey and Sarah. In a dead set, Milly lost 3-1 to Nicole, but that didn’t matter, as the girls from Leamington, the underdogs throughout the day, had won their first match of the day 3-2.

Well done to Olivia Fletcher and Milly Bradshaw for their efforts throughout the day; and to Tracey and Sarah for their continued support.