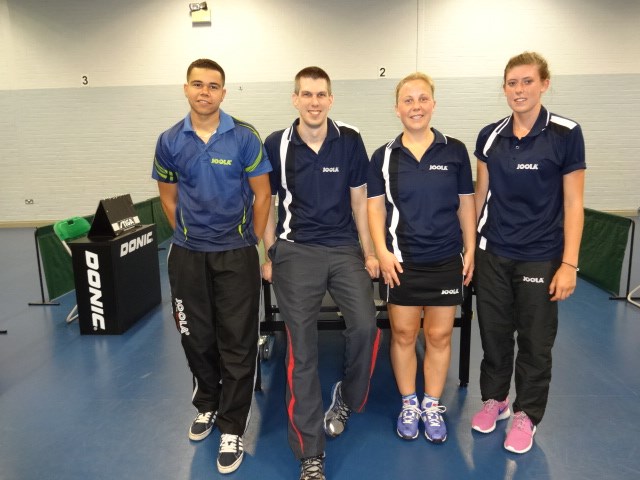 On Saturday 7th June, Kate Hughes and Charlotte Spencer represented Leamington Spa in the Rose Bowl Finals at Westfield Table Tennis Centre, Wellingborough. This event is a contest between the top eight league teams in England, who have qualified through regional , zonal rounds.

Leamingtons second match was against Bracknell and Wokingham. Kate and Charlotte were on excellent form in this match, winning all five sets 3-0; remaining in full control throughout.

The final match in the group stages was against No. 1 seeds Bournemouth. The team were without No. 2 Veteran Sanja Clements, but did select the forthcoming Commonwealth Games player Chloe Thomas from Wales. Chloe won both singles against Kate and Charlotte – demonstrating the benefit of being able to train full time and play abroad in Sweden. However, the Leamington duo battled hard to both beat Linda Hales (Kate winning 3-0, and Charlotte winning 3-1) , thus the match was going to be decided by a decisive doubles. Leamington won the first end 11-7; only to lose the second 3-11. The third went to Leamington 11-8, but Bournemouth fought back to win the 4th and 5th 7-11 and 6-11. The doubles loss meant that Leamington had lost 2-3 to the top team.

Leamington then played Leicester to decide 3rd and 4th positions. Charlotte played top 20 senior Karen Smith first and lost closely in 4 sets. Kate then played Jessica Birbeck and despite two close ends she still won 3-0 to level the score at 1-1. Next up came the crucial doubles. This went to 5 sets; but Leamington came out victorious winning 11-2 in the 5th set. Karen got revenge against Kate in the next singles (following the regional loss) to level the match at 2-2. Charlotte and Jessica then played the last match of the day to decide the 3rd place. With both girls playing their 8th singles of the day; it was a battle between the two; with Jessica Birbeck winning 11-8, 8-11, 11-7, 5-11, 11-4 to give Leicester 3rd place and push Leamington into a slightly disappointing 4th place.

Bournemouth were crowned 2014 Champions beating Leeds 3-1 in the final.