Hard work for the Junior Team 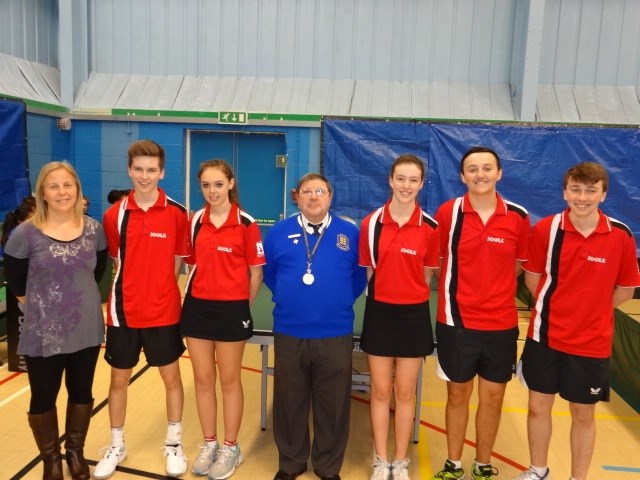 The first match was against Hertfordshire, who finished 3rd in the league last year. Timmy Cooper had a tough first match against Jamie Fisher losing 1-3, despite winning the third set 11-2. Lee Dorning equalled the match score by beating Chris Clifford (Herts No 3) 11-7, 11-8, 11-5. Olivia Fletcher and Lisa Rinnhofer both lost their first matches, Olivia losing a close 5 setter to Jessica Jarvis, and Lisa losing to Charlize Uy 1-3. Sam Henderson had a very tough first match against Danny Lewis losing 7-11, 11-6, 7-11, 8-11. After five matches, Warwickshire were 1-4 down. The second five matches were a slight improvement for the Bears, Sam Henderson beat Chris Clifford 3-0. Timmy Cooper had an excellent win against England Junior No 30 Danny Lewis, winning 11-9, 7-11, 11-13, 13-11, 11-6. Olivia lost to Uy 3-0; Lisa had a close fought match against Jarvis losing 8-11 in the 5th set; and Lee lost to Jamie Fisher 3-0. The overall match score was 3-7 to Hertfordshire.

The second match for the Bears was against newly promoted Nottinghamshire. Sam Henderson played the first match against twelve year old Naphat Boonhaprara, and successfully won 11-9, 11-8, 11-7 playing a controlled game, demonstrating a combination of his attacking and blocking strokes. This was a really positive win against a player who didn’t lose any other matches throughout the day. Lee Dorning doubled the Warwickshire score with an excellent 3-0 win against Harry Tomlinson. Timmy Cooper also beat Tom McIntosh 3-0. Olivia and Lisa both had much closer games against the Nottinghamshire girls; losing in 4 and 5 sets against Amber Zygadlo and Junior Number 10 Amy Humphreys respectively. Sam Henderson and Lee Dorning also won their second matches 3-0 to give Warwickshire a 5-4 lead, with Timmy left to play against Naphat Boonhaprara in the deciding match. He had a good start winning the first end 11-7, however the Nottinghamshire junior came back to win the next three sets 5-11, 14-16, 9-11. The overall score finished as a 5-5 draw, giving Warwickshire their first point.

The final match of the day was against Derbyshire. Sam Henderson played against Derbyshire’s Number 1 Tim Denby. It was a very close match with the Derbyshire player succeeding 12-14, 17-15, 11-7, 9-11, 10-12. Lee Dorning equalled the score line with a convincing 3-0 win (11-3, 11-7, 11-4) against Robin Pearson. Olivia Fletcher lost 0-3 to Jayden Budworth; whilst Lisa Rinnhofer lost to Latvian International Diana Rusinova 0-3. Timmy Cooper beat Lucas King 3-0 to give pull back the score to 2-3 to Derbyshire, going into the second half of the matches. Sam levelled the score at 3-3 when he beat Pearson 3-1. Lisa Rinnhofer then played Jayden Budworth, and despite losing the second set she prevailed as the victor winning 13-11, 6-11, 11-5, 11-9, demonstrating an excellent game of controlled counter hitting. Olivia Fletcher played really well against Diana Rusinova but was faced with a battle against the Latvian International. Timmy had yet another 5-set battle against the Derbyshire Number 1 Tim Denby. This was a great match, however it was the Derbyshire player who succeeded 11-9, 9-11, 6-11, 11-8, 8-11. This meant the score line was 4-5 to Derbyshire, with Lee Dorning left to play. Lee played an excellent match to give Warwickshire their second draw of the day. He beat Lucas King 11-7, 11-7, 11-8. This was an excellent result in a pressurised situation.

The Warwickshire team were well supported by lots of parents, as well as Emma Kilpatrick who not only supported the team, but she also helped with some umpiring for our opposing teams. A special thank you must go to Inky Moss who umpired excellently for Warwickshire throughout the day. The remaining county matches are to be played in March 2015, and with Warwickshire having achieved two points from a possible six; it is going to be an important day for all players involved against the other teams (Cheshire, Lancashire, Yorkshire and Staffordshire) to remain in Division 1A.