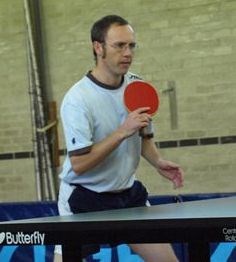 The Warwickshire Over 40s Veterans exceeded expectations in the first series of County Championship matches following their promotion to Division 1A, winning two and narrowly losing one of their three matches.

First up were Yorkshire second team, led by the highly unorthodox England number 29, Richard Lightowler.  And it was Lightowler who was the difference between the teams, beating both Mark Jackson and Michael Browne as Yorkshire came through to win 6-4.

The county side fared much better against Gloucestershire, with Jackson, Browne, Simon Griew and Dawn Sagoo all pitching in with good wins in both singles and doubles.  Having secured the victory, Jackson capped an impressive 8-2 score-line with a superb win over England number 9, Darren Griffin.

In the final match of the weekend, the Warwickshire faced local rivals Worcestershire.  With the match finely poised at 2 sets all, Worcestershire number 2, Stephane Bonnafous, was forced to retire with a torn calf muscle in the middle of a tight tussle with Griew.  This proved to be the turning point and wins for Sagoo in the women’s singles and Browne & Griew in the men’s doubles followed as the country side pressed home the advantage to take a 5-2 lead.  Worcestershire fought back to make it 5-4 but Griew and Sagoo held their nerve in the final mixed doubles to seal a creditable win.